We look at the course and favourites for Sunday's first Monument of the season...
by Simon_MacMichael

This Sunday won’t be a day of rest for the 200 riders contesting Milan-San Remo as the first Monument of the year moves from its traditional Saturday slot for the first time. It’s also St Patrick’s Day – appropriately, expectations are that it’s a man in green, Cannondale’s Peter Sagan, who will be celebrating at the end of the sport’s longest one-day race, although he won’t be sporting a Guinness hat.

Here’s our preview of the route and some of the riders who can stop the in-form Slovak from winning his first monument.

The route has a distinctly narrative aspect, partly because of that famous tunnel at the top of the Passo del Turchino that figuratively marks the passage from winter – the snow-covered peaks of the Alps are visible from the roof of Milan’s Duomo – into spring as it descends towards the beaches of the Mediterranean and its conclusion in a city famous for its flowers. 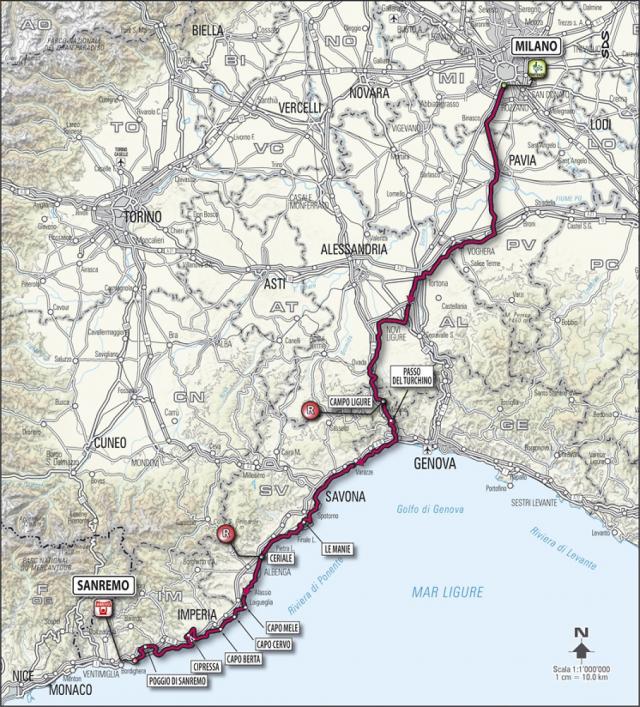 Unusually, given that Milan-San Remo is now into its second century, it’s also a race that still starts and finishes in the places it takes its name from; Paris-Roubaix, by contrast, hasn’t started in the French capital since 1967, the following year’s edition setting off 60 kilometres to the north in Compiègne, as it has done every year since.

In fact, uniquely for a race of its stature, Milan-San Remo, at 298 kilometres, is now 10 kilometres longer than it was in its first edition in 1907. That’s because of the inclusion of three climbs over the years to toughen up the parcours and prevent the race from ending in a predictable sprint – the Poggio in 1960, the Cipressa in 1982 and, most recently, Le Manie in 2008.

While it is the Poggio that is most often decisive these days, including last year, that earlier climb of Le Manie has also proved influential in the past two editions of the race. 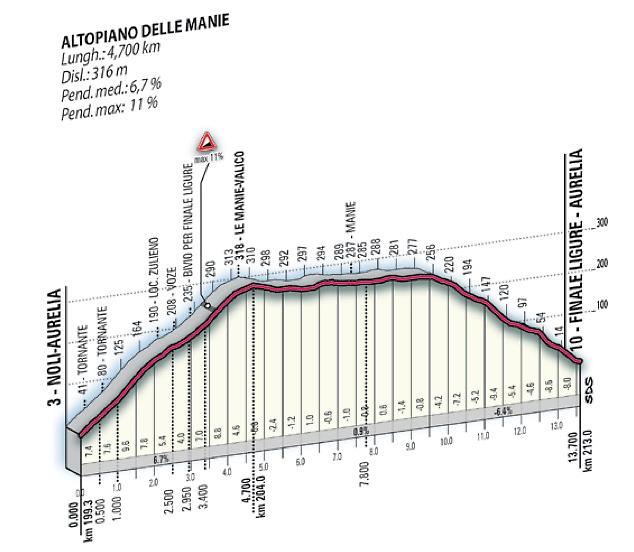 In 2011, a series of crashes on the rain-soaked descent allowed a group of 44 riders, including winner Matt Goss, to get away. For much of the remaining 90-odd kilometres, the gap to the chasing group was tantalisingly small, but they wouldn’t be caught. Rain is forecast for this Sunday, too.

Last year, Mark Cavendish started a strong favourite and felt terrific at the start in Milan. They were even belting out I Predict A Riot in the Team Sky bus before the start, and they got one, though not in the way they hoped.

By the time he’d come off Le Manie, Cavendish's dream of following up his 2009 victory by winning Milan-San Remo in the rainbow jersey was in tatters, as Liquigas-Cannondale put the hammer down at the front of the bunch and the he was dropped. Despite the efforts of his team mates, he couldn't chase back on.

Indeed, since winning the 100th edition by the slimmest of margins from Heinrich Haussler, Cavendish’s experience of the race has been an unhappy one. In 2010, illness and injury blighted his build-up, and a puncture followed by a crash on, yes, Le Manie, put paid to his chances. In 2011, he was one of the riders held up by those crashes on the same descent.

While Cavendish missed out in the two sprint stages in Tirreno-Adriatico last week, a lot of that was down to the narrowness of the road in the finishes in question that left him with no way through – not so much of an issue in San Remo, though the bigger question remains whether he will be around to contest the finale.

If he is, however, he’ll be tough to beat; we'd still back him in a straight sprint against Sagan.

Although the bookies make Cavendish second favourite, the rider who will spearhead Omega Pharma-Quick Step’s challenge is less bullish than he was 12 months ago.

Team mate Tom Boonen is racing, but his start to 2013 has been hampered by the elbow infection that required him to undergo surgery. The team’s two in form riders both impressed last week – Sylvain Chavanel at Paris-Nice and Michal Kwiatowski in Tirreno-Adriatico.

In the latter race, RadioShack-Leopard’s Fabian Cancellara took the closing time trial last year, and a week later in Milan-San Remo was the rider of the three who got away on the Poggio who did most to ensure they wouldn’t be caught, Astana’s Vincenzo Nibali and Simon Gerrans of Orica-GreenEdge, the eventual winner, content to let him do pretty much all the work on the 6 kilometre descent and run-in to the line.

While Cancellara, winner in 2008 and runner-up in each of the last two editions, must figure on any list of potential winners, he doesn’t look to be quite in the same shape as he has been in previous years. Few riding the race on Sunday know the course better, however, and few are as capable as he of staying away, even if he may be outsprinted at the death.

The Orica-GreenEdge pair of Goss and Gerrans likewise don’t seem to be in quite the shape they were when they took their victories in the past two editions, although the former at least got a long-awaited victory under his belt in Tirreno-Adriatico.

There are two other former winners in the field, and both are Italian – Alessandro Petacchi and Lampre-Merida team mate, Pippo Pozzato. Petacchi, who turns 40 next birthday, has seen his pace blunted by age; experience is a quality that can’t be undervalued in this type of race, but it would be a massive shock for him to pull it off.

Pozzato, by contrast, is very much in form, as he showed at Roma Maxima earlier this month, where he won the sprint to finish runner-up to Blel Kadri – the Italian believed he’d won the race itself, though the fact that as a WorldTour race, radios are allowed at Milan-Sanremo means there will be no such mix-up this time.

Together with rock-solid favourite Sagan, who the form book as well as the odds-setters dictates is the man to beat – last year, he led the peloton home as it breathed down the necks of the trio out front, and given another couple of hundred metres or so would have won it – Cavendish, Goss, Cancellara and Pozzato round out the top five in the betting.

Beyond them, there are plenty who on their day could win it. Nibali’s attack on the penultimate stage of Tirreno-Adriatico to set himself up for a successful defence of his title showed that when it comes to descending in the wet, he is without equal; as we saw then, though, one who can just about match him and then win the sprint, is that man Sagan. 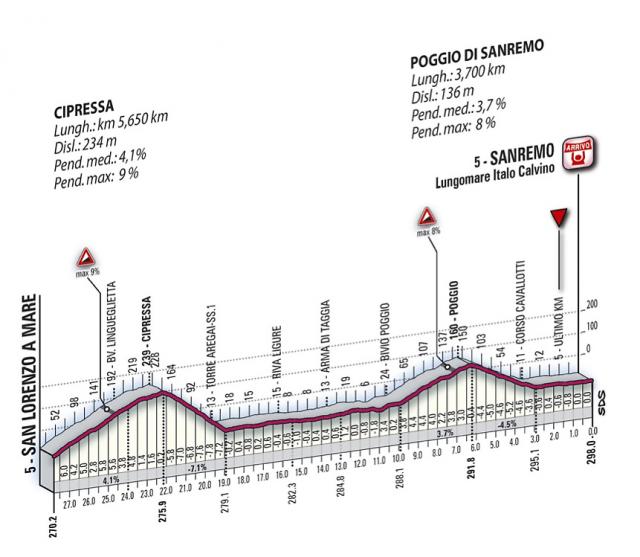 If the race doesn’t break up over Le Manie, and if attacks prove unable to get away on the Cipressa or the Poggio, then there will be some big name sprinters slugging it out on the Lungomare Italo Calvino for the win – besides Sagan, Cavendish and Goss, the field includes Argos-Shimano’s John Degenkolb and André Greipel of Lotto Belisol, while as well as Pozzato, Daniele Bennati of Saxo-Tinkoff is probably the pick of the fast finishers among the home riders. Some will inevitably have been dropped along the way, however.

If a big selection is made, then besides the likes of Sagan, Pozzato, Nibali, Chavanel, and Cancellara mentioned above, look for riders such as BMC Racing’s world champion, Philippe Gilbert, team mate Thor Hushovd, Sky's Edvald Boasson Hagen and Strade Bianche winner Moreno Moser of Cannondale to try and get on the right side of it.

And as we saw two years ago, if the field does split, it can make for a surprise victor – if all had gone according to plan, Goss would have been final leadout for then HTC team mate Cavendish, but instead found himself as the one pure sprinter in the final group by the time the race hit San Remo. He'd hidden himself well in the group, but when he went for the line there was only going to be one winner. There are two riders who we reckon could figure in the finale and even be outside bets for the podium, but who for different reasons missed last year’s Spring campaign and whose progression is therefore perhaps difficult to gauge.

Those are Team Sky’s Geraint Thomas, who focused mainly on the track last year as he helped defend Team GB’s team pursuit Olympic title, and FDJ’s Yoann Offredo, 16th in 2010 and 7th a year later, but who missed the 2012 season after being banned for whereabouts violations.

What we can say is a lot of Sunday’s race will to a large extent follow a tried and tested script.

There will be a break early on that will lead the race across the flat landscape of Lombardy as it crosses the rivers Ticino and Po, and that will almost certainly still be ahead on the long slog up to the Passo del Turchino and down the other side as the riace skirts Genoa and then heads along the Ligurian coast.

There will be a lot of fighting for position in the peloton before the climb to Le Manie to get to the head of the group prior to the narrow start of the ascent to claim those vital front places and minimise the risk of being held up behind the crashes.

There will also be attacks on the Cipressa and, 100 per cent guaranteed, the Poggio as the race heads towards its climax.

The smart money’s on Sagan, but a lot can happen over 298 kilometres, and on Sunday it will. Guaranteed.

As a bonus, those descents from Le Manie, the Cipressa and the Poggio that could prove influential to the result of Sunday's race? Here's the rider's eye view of each of them, uploaded to YouTube by Argos Shimano's Koen de Kort after his recce prior to last year's race. He'll be riding this weekend.