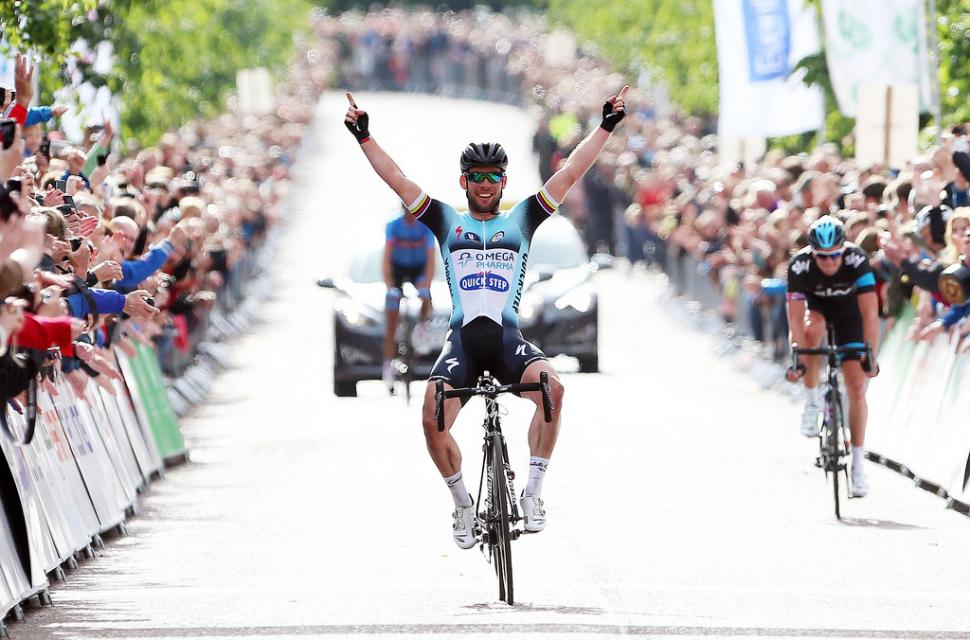 Mark Cavendish of Omega Pharma-Quick Step will take to the start of the Tour de France on Corsica next Saturday in the British national champion's jersey after winning a gripping and hard fought race in Glasgow today. The former world champion, who has never previously won the national title, was one of four riders battling for the win on the final lap, outsprinting defending champion Ian Stannard of Team Sky and Garmin-Sharp's David Millar. The fourth member of the quartet, Sky's Peter Kennaugh, had been dropped earlier on that last lap.

The identity of the three riders who would make up the podium, if not the order in which they would finish, seemed to have been decided with around a lap to go when Stannard punctured, but his companions eased off the gas to let the defending champion rejoin them.

That select group had found themselves alone out in front with around four of the 13 laps of the 14.2km circuit left to ride, the course starting and finishing at Glasgow Green in the east, heading across the city centre towards Byres Road in the West End before looping back.

A number of climbs dotted the circuit, the toughest of those being Montrose Street, some 3km from the finish. It was inevitable that Cavendish’s companions would try and attack him, Stannard being the first to do so with around half a lap left, but neither he nor Millar, who also tried to ride away, were able to dislodge the Manxman.

Stannard had got away early on in the race with Omega Pharma-Quick Step’s Andy Fenn – the latter was born in Hertfordshire, but is likely to be racing here for Scotland in next year’s Commonwealth Games, having previously ridden for the country in Delhi three years ago.

Millar, a team mate of Fenn’s in that race, winning bronze, was one of four riders who made up a strong chasing group, alongside Cavendish and the Team Sky pairing of Kennaugh and Ben Swift.

With six laps still to ride, and Cavendish reporteldy looking at ease on the uphill sections, the two groups combined and had an advantage of more than two minutes over their closest pursuers, including the last non-Sky rider to win the national title, Rapha-Condor-JLT’s Kristian House.

A couple of laps later, Fenn and Swift were dropped and it seemed clear that the winner was going to come from the quartet out in front, although Sky’s Luke Rowe put in a big effort to try and close down the gap, At more than four minutes down, it was always going to be a hopeless task.

Even with three laps still to go, the attrition of a hard day’s racing was taking its toll, with just 24 riders left of the 160 who had started – and most of those were 12 minutes off the lead by that point.

By that point, Fenn had abandoned and shared his thoughts with British Cycling on how the race was shaping up, saying: “The course was much harder than expected and I'll be surprised if a group comes to the finish, it's a case of last man standing.”

Presciently, he added that Cavendish was looking good, and so it proved as his Omega Pharma-Quick Step team mate filled in what had until this afternoon been a significant gap in his jersey collection.

There was also a race-within-the-race to decide the under 23 title - that goes to Simon Yates of 100% Me, who thereby continues his terrific 2013 - unlike the rest of the Great Britain squad, he didn't even have a profile on British Cycling's website prior to winning the points race at the track worlds in Minsk in March.

Highlights of today’s men’s and women’s races, as well as Thursday’s time trials, will be broadcast on ITV4 tomorrow, Monday 24 June, at 7pm.