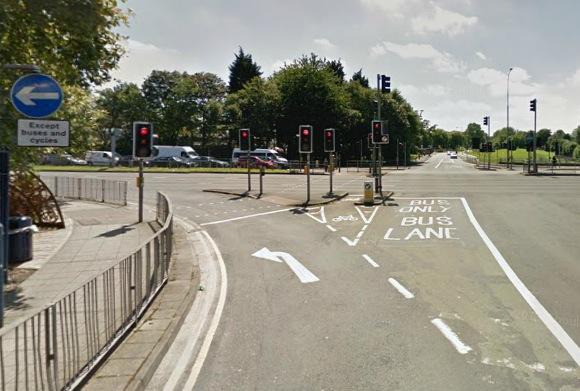 A group of cyclists in Birmingham have been described as “vigilantes” following an incident on Monday evening in which it is claimed a taxi was surrounded by riders, with one of the vehicle’s wing mirrors ripped off. The vehicle was attempting to use a bus lane from which taxis are excluded.

The cyclists were taking part in a flash ride organised via Facebook to urge Birmingham City Council to enforce rules that prevent black cabs, also known as Hackney Carriages, from being driven in some bus lanes in the city.

That includes the junction of Belgrave Middleway and Horton Square where Monday evening’s incident took place.

Writing on the event’s Facebook page on 7 October, organiser Toby Draper said:
“Too many cyclists have been injured, endangered or felt at risk at this junction due to motor vehicles using it illegally.

“This flash ride is being organised to send a message to the council that if the plans improve safety for cyclists, we welcome them.

“But we are watching closely and we expect enforcement to take place and fines to be issued in the event of ALL future violations.”

The junction is one that Birmingham City Council specifically identifies on its website as being subject to the next phase of bus lane enforcement in the city.

The council has launched a public consultation into its proposals for minor changes at the junction, saying:

In February 2013 Birmingham City Council’s Cabinet approved a city wide civil Bus Lane Enforcement (BLE) regime to be implemented on a phased basis, starting with the city centre where enforcement commenced in summer 2013. As part of the next phase, we are looking to introduce BLE measures at the junction of Belgrave Middleway with Longmore Street and Horton Square.

There is a bus gate situated at this junction allowing bus movements to and from the City Centre. The Rea Valley Cycle Route (NCN5) also crosses Belgrave Middleway at this location. Only buses, cycles and emergency vehicles are allowed through the bus gate.

According to the time logged on a series of still images from the taxi’s dashboard-mounted camera and accompanying a report on the incident on the Birmingham Mail’s website, the cyclists positioned themselves for at least 27 minutes in front of the vehicle to prevent it from moving straight on through the traffic lights.

The taxi driver involved, 42-year-old Abid Hussain, gave his version of events to the newspaper and claimed that inadequate signage and an inconsistent approach form the council as which bus lanes black cabs are permitted to use caused confusion for drivers.

The image from Google Street View above, assuming that the sign and road markings are unaltered since it was taken, suggests however that it is clear that only buses and bicycles are allowed to go straight on.

Mr Hussain said: “They [the cyclists] were a law unto themselves. I couldn’t move anywhere because of the sheer numbers.

‘‘These people on two wheels, who don’t even pay road tax, were acting like vigilantes.’’

Road tax was abolished in the 1930’s, as documented on Carlton Reid’s website, IPayRoadTax.com. Motorists now pay Vehicle Excise Duty, based on their vehicles’ emissions, with no payment required for some low-emission vehicles.

The taxi driver continued: ‘‘I’d picked up a lecturer from Aston University and was taking her to Kings Heath.

“I could see a gathering of cyclists in the road. They just blocked me off and said I couldn’t pass because it was for buses.

“I had nowhere to go and they were becoming increasingly aggressive. I was concerned that one of them would jump in front of the taxi and get hurt, so I stopped.

“My passenger told me not to speak to them and she was the one who called police.

“The police arrived and it all seemed calm. I tried to move around them but, as I was crawling along, one of them blocked me again and another came up the side and ripped off the wing mirror.’

“We are a public service. We are here to serve the community but we are being attacked.

‘‘Part of the problem is the city council and the inconsistency in road signage and rules for lanes. The council needs to decide whether Hackney Carriage drivers are included in public transport networks.’’

Comments from West Midlands Police, who were called to the scene at approximately 6.40pm on Monday, suggest that there is also confusion among officers about the bus lanes that Hackney Carriages are permitted to use.

A spokeswoman for the force told the Birmingham Mail: “Three police officers and a police community support officer responded to reports that a group of cyclists were blocking the path of a black cab driver.

“They were under the impression that he was not allowed to use the lane and the driver was saying that he could.

“Officers advised the group that they were causing an obstruction on the highway.

“The situation seemed to have been resolved, when one cyclist rode into the path of the driver who was moving away. A second cyclist broke off a wing mirror and rode off.

“The group refused to give details to officers at the scene.

“Officers are investigating a report of criminal damage and are examining CCTV.”

One cyclist who said she had taken part in Monday’s ride is Nazan Fennell, whose 13-year-old daughter Hope was killed by a lorry while cycling in November 2011.

Last month, the driver was jailed for six months for dangerous driving – as distinct from causing death by dangerous driving – with the court hearing that he had sent a series of text messages to his girlfriend in the time leading up to the collision, and had also deleted several messages afterwards.

Later in September, Hope’s mother staged a sit-down protest in front of a lorry during a ride in memory of her daughter.

Contacting the Birmingham Mail after Monday’s flash ride, Ms Fennell said: “This crossing is a vital link across the ring road for cyclists, but those cyclists’ lives are put at risk by other vehicles abusing this lane.

“Unfortunately a single taxi driver chose to block the entrance to the bus lane leading out of the city centre for over 30 minutes, and argued that he had the right to use the bus lane.

“Push Bikes is very disappointed that the first police officer to speak to this taxi driver was uncertain about the meaning of the clear signs at this crossing, and did not persuade the taxi driver to take the legal route out and argued that he had the right to use the bus lane.”

We have asked Push Bikes – founded in 1978 as the Birmingham Bicycling Campaign, changing its name a year later – for a statement on Monday’s incident, as well as whether Ms Fennell holds a position within the organisation and whether her comments reflect its views.

Ms Fennell added: ‘‘The message from Monday night is clear - our streets are made dangerous by a minority of bad drivers, and it is vitally important for the police and local authorities to punish drivers who think they are above the rules of the road.

‘‘Proper enforcement of regulations on highway infrastructure is vital to the success of Birmingham’s cycle revolution.’’