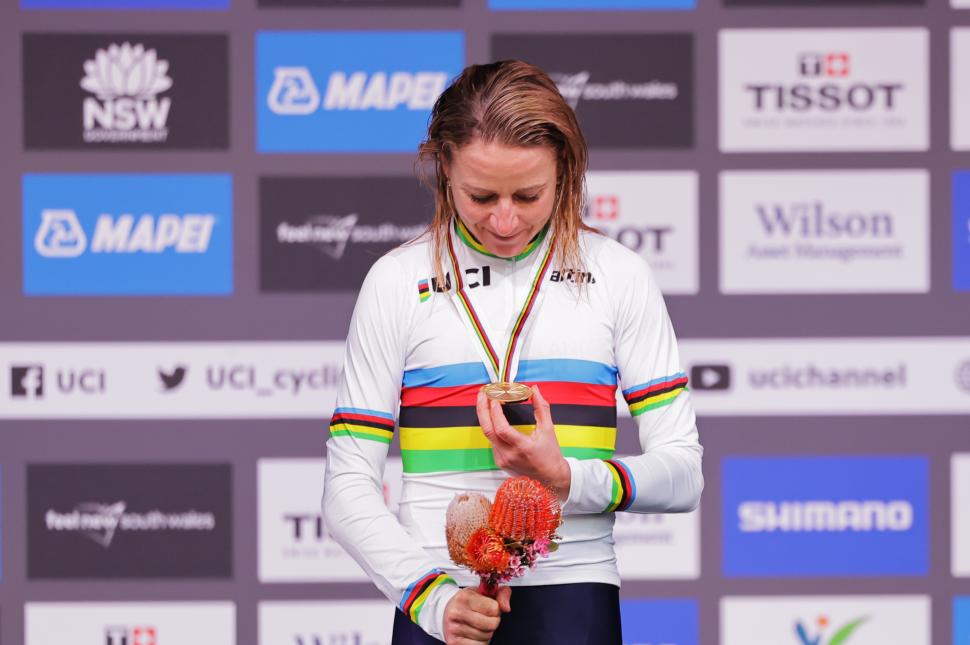 Annemiek van Vleuten, heavily bandaged having fractured her elbow in a crash on Wednesday and seemingly working for her Dutch teammate Marianne Vos, took a stunning win to become world road race champion once again, surprising everyone with an expertly-timed attack in the final kilometre.

The pre-race talk had been about if the 39-year-old would even start having suffered a heavy fall and a fractured elbow in a dramatic mixed relay crash earlier in the week, but boy did she show up.

An attack for the history books 🌈

As the race looked set to be decided by a reduced sprint, Belgian Lotte Kopecky the strong favourite, Van Vleuten darted out from the back of the group, leaving everything on the road to hold off the charging chasers and win her second road race world title.

> From Coppi to Van Vleuten: Cycling’s greatest ever seasons

Afterwards, seemingly in shock, Van Vleuten was congratulated by Vos who the Movistar rider spent parts of the day working for. Behind, Kopecky hit her handlebars in frustration having crossed the line in second, while Italy's Silvia Persico was third. "I still cannot believe it, I'm waiting for the moment someone tells me it's not true," Van Vleuten said afterwards.

"I was working for Marianne...and I suddenly found myself in the group [...] I knew that I couldn't sprint with my elbow. I waited for the moment to attack from behind, it was the only chance I had. I was waiting for them to sprint past me...but they didn't catch me! "It was hell, I couldn't get out the saddle so I had to do everything seated and my legs were exploding on the climb. We had only Marianne as leader, I was just a domestique today with a broken elbow...now I'm world champion!" A star of the future

Once again Zoe Bäckstedt showed why she is one of the most exciting prospects in the sport, dominating the women's junior road race to complete the time trial and road race double. 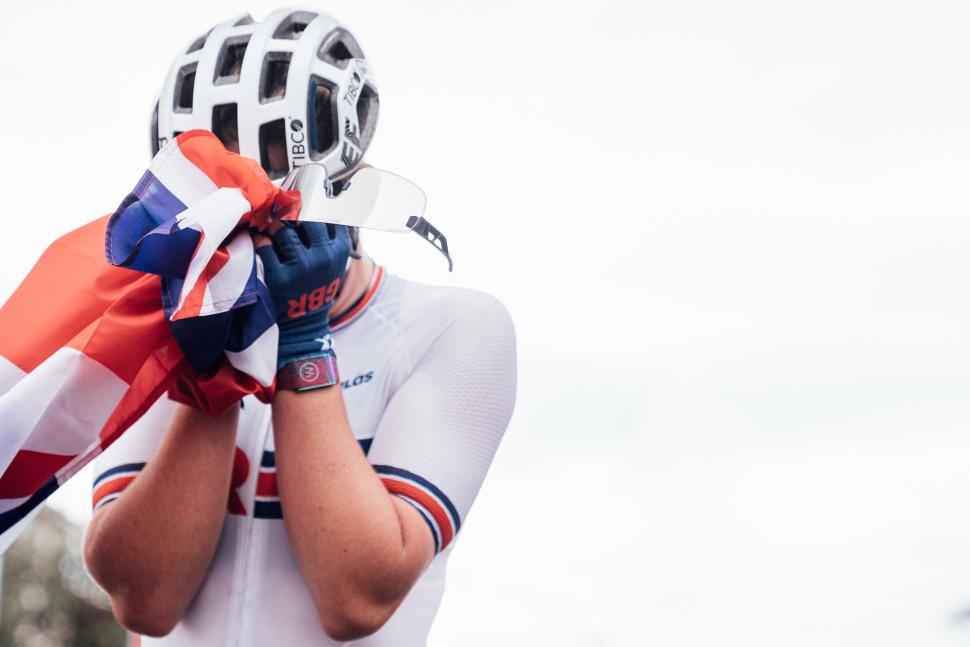 Bäckstedt — the daughter of Magnus Bäckstedt who was born in the same year as her father's famous Paris-Roubaix win — representing Great Britain on her 18th birthday, attacked with 57km to go and soloed to victory, defending the race she won in Flanders last year.

INCREDIBLE 🌈 🇬🇧@Backstedt_Zoe retains her rainbow stripes in the Women Junior Road Race and on her birthday too 🎉#Wollongong2022 pic.twitter.com/FflWxvtCXF

It is her fifth world title having also won rainbow jerseys on the track and in cyclocross, Bäckstedt afterwards admitting it was hard to keep the emotions in once victory was secured. "I was in tears from a kilometre to go," she said. "There were so many people out on course just shouting out my name, shouting out 'happy birthday', especially on the climb that's where I needed it the most.

On her 18th birthday @Backstedt_Zoe takes the double and maintains her title as Junior Women's Road Race Champion 🇬🇧#Wollongong2022 pic.twitter.com/1yLebTaO4L

"There were people running with me. One thing in the corner of my eye there was this little girl in a pink onesie and she just kept running alongside me the whole time screaming my name and I am so grateful for that because it just pushed me on so much."

How Van Vleuten shocked the world

Pre-race the talk of the women's peloton was Demi Vollering's last-minute withdrawl due to a positive Covid test, leaving the Dutch with 'just' favourite and three-time road race world champion Vos and an injury-hampered Van Vleuten.

The day began with a competitive fight to make the breakaway — multiple attacks and regroups before a three-rider escape, including the elder Bäckstedt sister, Elynor, Belgian Julie Van de Velde and Sweden's Caroline Andersson finally broke free after 53km.

Onto the finish circuit and each lap was punctuated by the brutal ramp up Mount Pleasant, dubbed Mount Unpleasant by Wout van Aert this week, the kilometre-long nine per cent slopes causing Andersson to drop from the breakaway on the second of six ascents.

Once the pace was upped by the Italian and Dutch teams the two-rider break was pulled back at around 55km to go, an invitation for plucky underdogs to take their chances with a long-range attack with three ascents to go.

With the first raindrops starting to fall and team leader Grace Brown dropped, the Australians went on the attack at their home race — Amanda Spratt, Brodie Chapman and Sarah Roy trying their luck before the penultimate climb.

The Italians set a fierce pace on Mount Pleasant, whittling down the field further before Katarzyna Niewiadoma sprung the first major attack from the favourites, ending defending champion Elisa Balsamo's chances of retaining the jersey.

Vos and a heavily-strapped Van Vleuten were also missing from the front group as Liane Lippert pushed on with Elisa Longho Borghini, Niewiadoma, Cecilie Uttrup Ludwig and Ashleigh Moolman-Pasio onto the final lap. Pushed on by time trial world champion Ellen van Dijk and Van Vleuten, seemingly working for Vos, what was left of the peloton was brought back from 30 seconds behind to the group of five before the foot of the final ascent. 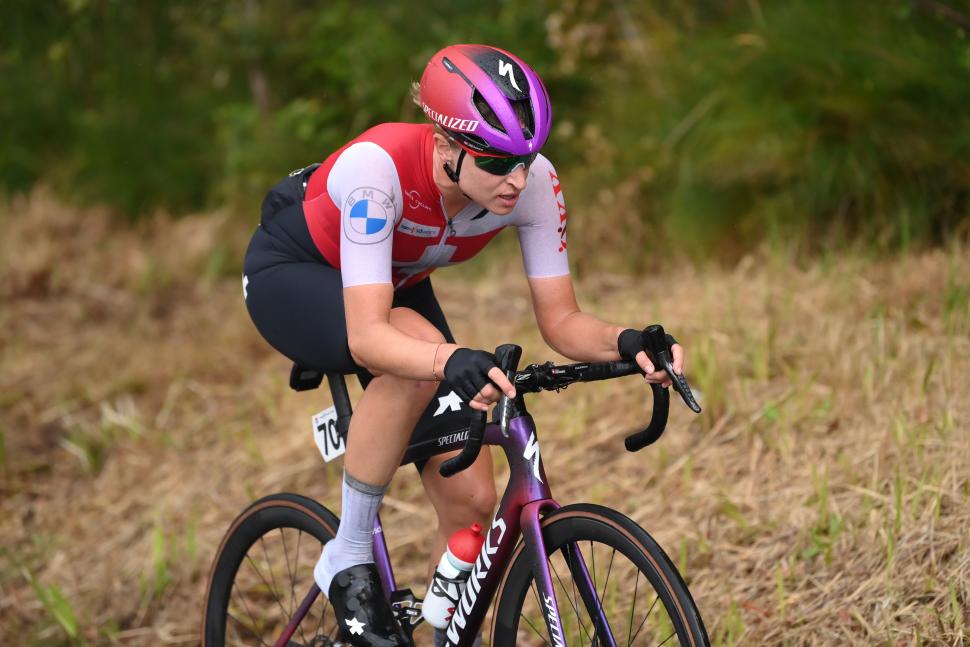 However, once the road titled skywards the previous lap's attackers were back off the front — Lippert, Niewiadoma, Uttrup Ludwig, Longho Borghini and Moolman-Passio showing themselves to be the strongest puncheurs in the race.

Eight riders chased, Van Vleuten and Kopecky amongst them, closing the gap with one kilometre to go and setting up an adrenaline-pumping sprint for rainbow glory.

That was meant to be the final line of this race report... Annemiek had other ideas...

What a win. What a rider.