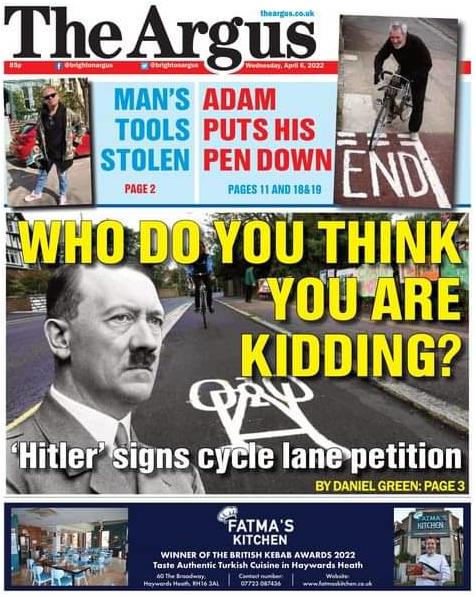 Petitions for and against the return of a Hove cycle lane have been plagued by the use of fake names, including Hitler and Mo Salah
by Ryan Mallon

Local Brighton newspaper the Argus has come in for criticism after its front page featured a photograph of Adolf Hitler as part of a story about the possible return of a bike lane on the Old Shoreham Road in Hove.

In November 2021 Brighton and Hove City Council was docked 25 percent of its Capability Fund finance by the Department for Transport after councillors voted to remove a temporary cycle lane which local politicians claimed was “contentious” with other road users.

A petition to reinstall the Old Shoreham Road bike lane has attracted over 2,000 signatures on the council’s website, calling on the council to invest in “well-planned and high-quality permanent cycle lanes” in the area. It, along with a rival petition opposing the return of the cycle lane, is set to go before councillors at a meeting in Hove Town Hall tomorrow.

However, both petitions appear to have attracted the attention of mischief makers seeking to undermine the highly divisive debate, and include a number of clearly fake signatures, such as those of Adolf Hitler and Liverpool footballer Mohamed Salah.

Locals have flagged 202 duplicate, triplicate or suspect names which have appeared on the petition to ensure the Old Shoreham Road bike lane does not return.

Conservative councillor Robert Nemeth, who opposed the cycle lane, also appears to have signed the petition arguing for its return twice.

“I was surprised to learn that I had supposedly twice signed this controversial petition, especially when I do not sign any petitions that involve lobbying the council out of principle,” Nemeth told the Argus.

“Given that the petition is not hugely above the number of signatures that are required for council debate, it does raise the question of how many other signatures are fake.”

A spokesperson for the council said: “We've been made aware of a small number of signatures on the two petitions relating to cycle lanes that are clearly bogus.

“Unfortunately all petition forums, such as the council's, can attract users who are determined to misuse the process.

“We are currently looking at how we can best add a further level of verification to the petition signature process to avoid this issue in the future.”

The council confirmed that the bogus names have now been removed from both petitions.

Reporting on the story, the Argus featured on its front page today a large photograph of Hitler accompanied by the headline ‘Who do you think you are kidding?’, referencing the Dad’s Army theme tune.

For seemingly comedic effect and despite the awful atrocities in Ukraine being likened to the third reich the @brightonargus have printed a picture of Adolf Hitler on its front page. #brighton #hove pic.twitter.com/8PjkB7q4UX

The front page has attracted substantial criticism online, with one Twitter user describing it as “horrendously offensive”.

Another said it was “insensitive” and “an insult to the Jewish community and their family who died”.

Fiona Sharpe questioned if the newspaper showed “any thought for the Holocaust survivors in the city who might find this completely offensive?”

The Sussex Jewish Representative Council responded to the front page by writing to the newspaper to “express our shock at the offensive cover on today’s paper.

“Our community deserves better from a local paper. There are few reasons that justify putting a photo of Hitler on the cover – fake names on a petition is not one of them.”

Others criticised the conflation of the Nazi dictator with support for cycling infrastructure, with one writing: “The Argus has a lot to answer for the manner in which you are covering cycling issues in the city. This is further dragging your publication into the dirt.”