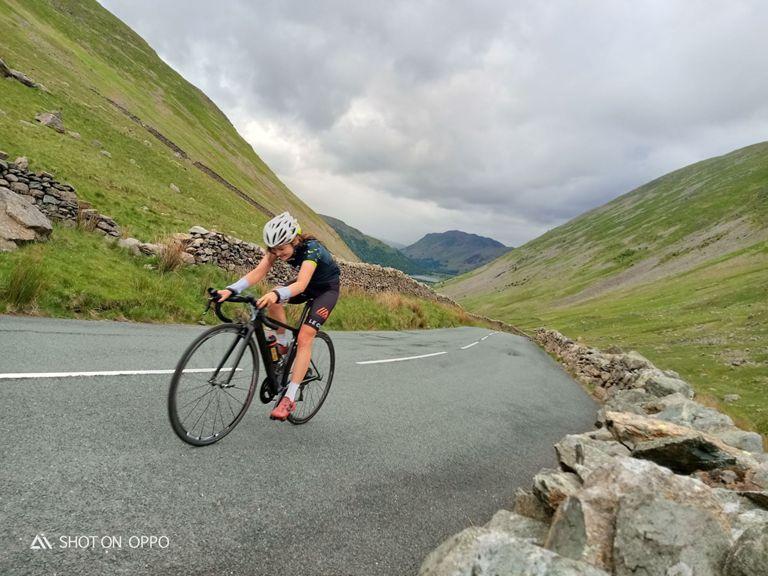 Hannah Rhodes is also the fastest British rider, male or female, to achieve the feat
by Simon_MacMichael

A cyclist who this weekend broke the women’s world record for Everesting – and in the process became the fastest British rider, male or female, to climb the height of the world’s biggest mountain – has been ‘mansplained’ over the height of her saddle.

She rode the Kirkstone Pass, which has an average gradient of 10.9 per cent, 27.5 times to set what is not only a new women’s world record, but also the fastest completion of an Everest by any British cyclist.

Rhodes, who was raising money on GoFundMe for the Staffordshire North and Stoke-on-Trent Citizen’s Advice Bureau, averaged 18.2kph during her ride, which you can find here on Strava.

But the first comment (which now seems to have been deleted) to a CyclingTips Facebook post on the new British record and women’s world record questioned her saddle height and riding position.

Bike Culture is so rotten, that the first comment on a woman smashing the Everesting record is some rando Bike Bro commenting on her saddle height. JFC. STFU Brent! pic.twitter.com/M4u9lmxwg9

Of course, there’s been no shortage of examples of women cyclists being offered unsolicited advice by men, and even the world’s top female riders are not immune from it.

After Dutch rider Annemiek van Vleuten crashed while leading the Olympic road race at Rio four years ago, suffering concussion and three fractures to her spine,Twitter user Marin Betancourt replied to one of her tweets with the words: “First rule of bicycling, keep your bike steady … whether fast or slow.”

Not that van Vleuten needed that ‘helpful’ advice – she already had impressive palmares and since the disappointment of Rio has added a string of stunning victories, including coming from nowhere to win La Course by Le Tour de France ij 2017 and, last year, the world road championship in Yorkshire with a solo break of more than 100 kilometres.

And last week, former world and Olympic champion track sprinter Victoria Pendleton recounted how, when she overtakes men while out riding her bike

She wrote: “If I’m out about on my road bike and I overtake a man for example ... I will hear a rapid crunching gears as they try to ‘make amends for it’ occasionally combined with a mumbling of ‘I must of been daydreaming ... like they need an excuse!’ Usually followed with a pedal mashing (usually short lived) stomp back past me.

“It doesn’t bother me I think it’s funny. I’ve always been underestimated because of the way I look ... one day I want to be intimidating ... but for now this is what I look like, a self-portrait."