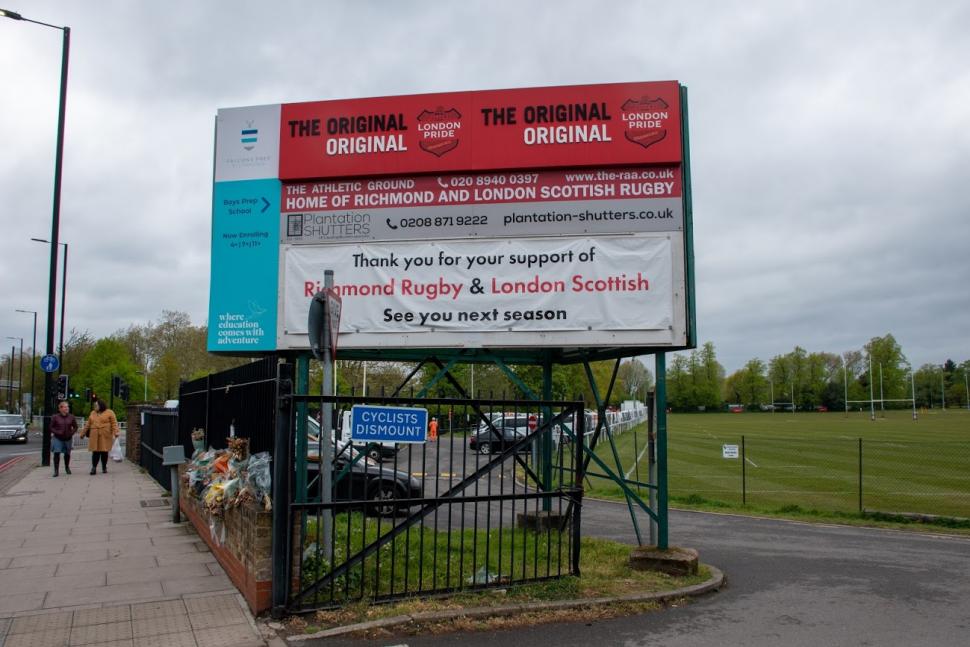 "We cannot wait for more people to die or be injured to act on things like this,” say Richmond Cycling Campaign...
by Simon_MacMichael

Cycling campaigners have repeated a long-standing call for changes to  be made to the exit from a sports ground in south west London following the death of a cyclist in late March.

A white ghost bike has been put up in memory of the victim, 58-year-old teacher Imelda Seymour on the A316 outside Richmond Athletic Ground. The venue is home to two of the capital’s oldest rugby union clubs, London Scottish FC and Richmond FC, and there is also a private health club on the site.

Both play in English rugby’s second tier, the Championship, and also field teams across all age groups and the venue also plays host to coaching sessions for children during school holidays.

Mrs Seymour died in St Mary’s Hospital, Paddington, from injuries sustained when she was struck by a van driver exiting the sports ground onto the dual carriageway Twickenham Road.

The road layout means that drivers coming out of the car park have no option but to turn left.

There is a cycle path on the footway between the sports ground and the main road that is used by cyclists riding in both directions, most heading to and from Twickenham Bridge a short distance to the west.

Campaigners believe that with motorists looking out for oncoming traffic, they may not check for cyclists coming from the opposite direction.

They also point out that while the exit from the car park has a sign warning them of “cyclists crossing,” there is no sign telling them to “look both ways.” There is also a “cyclists dismount” sign at the entrance to the car park.

The problem is highlighted by this 2010 picture from Cyclestreets with the caption: “Lucky escape for this woman,” and adds that the location “has been the scene of a number of cyclists being knocked off their bikes, fortunately none into the main dual carriageway. 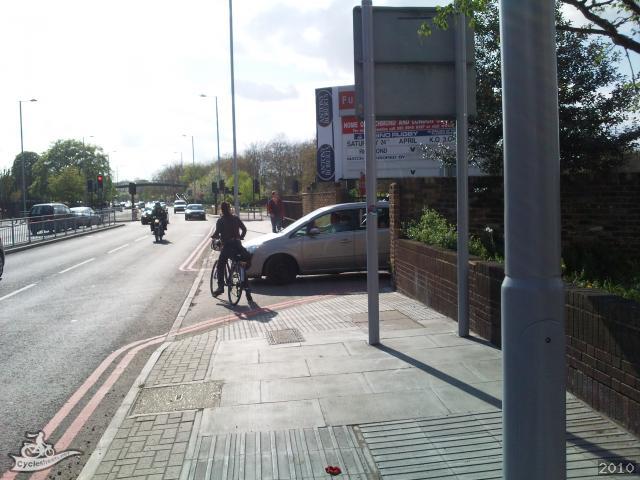 “There is a stop sign for cars exiting the car park giving priority to cyclists but [it] is frequently ignored.”

A separate ghost bike has also been installed just yards away at the junction of Kew Foot Road and St John’s Grove in memory of cyclist Henry Lang, 40, who was killed in a collision involving a bin lorry in 2014. Tim Lennon, head of Richmond Cycling Campaign, commented: “Since before the sad death of Henry Lang here we've asked for this cycle route to be improved. This old design, by providing some indication of safety, has shown the widespread desire of locals to cycle. It’s high time that TfL fixed problems like this.

“Especially with this particular exit, there really is no reason not to pursue the simple but very effective solution of simply closing this dangerous exit immediately.

"We cannot wait for more people to die or be injured to act on things like this. Imelda's death is a horrible tragedy brought about entirely by the poor design of this junction, and the abject failure of TfL and the club who own the car park to take appropriate safety steps."

A preliminary coroner’s inquest last month heard that the Metropolitan Police were continuing their investigation into Mrs Seymour's death and had not yet decided to refer the case for prosecution.