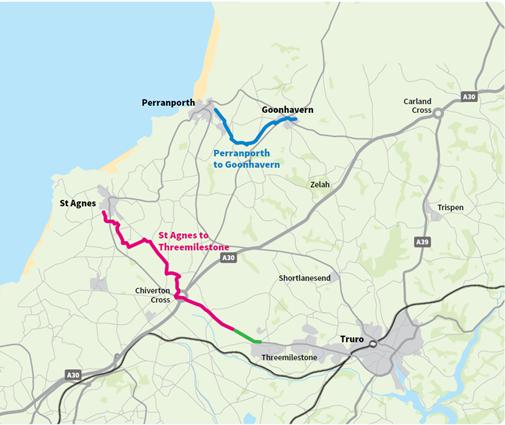 The project, described as an “unmitigated disaster” by local councillors, was dramatically scaled back after failing to secure land and running over budget
by Ryan Mallon

Cornwall Council has confirmed that it has commissioned an internal and external review of a failed cycle paths project in the county, which has been described by councillors as an “unmitigated disaster”.

However, the £19 million scheme, funded mainly through government grants, has been dramatically scaled back after failing to secure the land necessary to complete the trails, with three of the four routes either altered or completely axed.

According to Cornwall Live, in January 2021 the council’s audit committee was told that the project was set to come in £6 million over budget and was unlikely to be delivered on time.

Despite council director Phil Mason’s assurances that the scheme would still go ahead as planned, budget, time and land constraints continued to dog the project, with further cuts made throughout the last year and a half.

In response, Cornwall councillors have called for a full investigation into the failures behind the scheme, with some calling for a “warts and all” report as part of a broader re-evaluation of the working culture within the council.

On Friday, it was confirmed by the chair of the audit committee Armaud Toms that two reviews will take place, the full findings of which are expected to be published in November.

Two of the routes, Perranporth to Goonhavern and St Agnes to Threemilestone, are still scheduled to be completed in the next year.