"Here's a man who never buys his own bearings": Peter Sagan pressure washes his poor Specialized...and people aren't happy; Cereal offender; How to watch our James May interview; School bike buses + more on the live blog

Is it a mirage or is it actually Friday? Warm up for our special Drink at your desk Friday with James May at 4pm by joining Dan Alexander on the live blog... 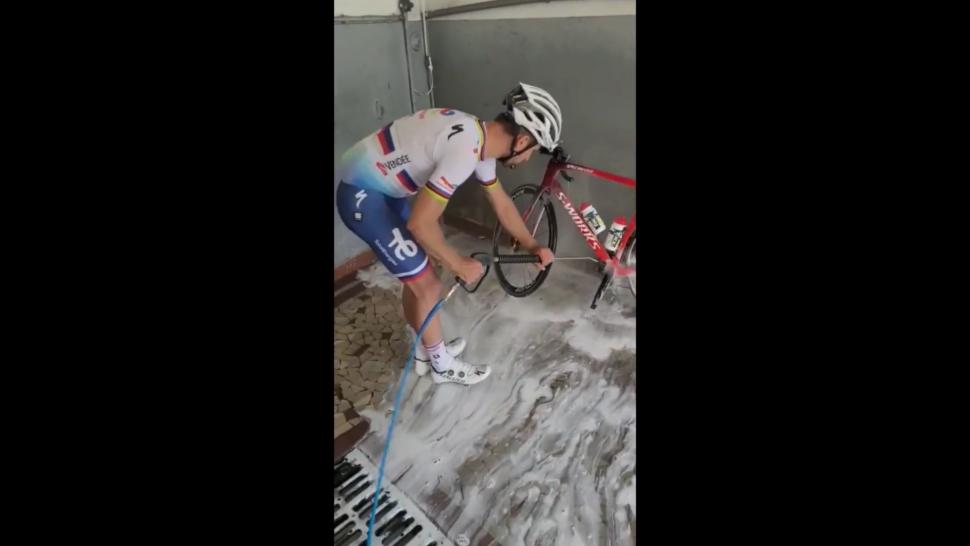 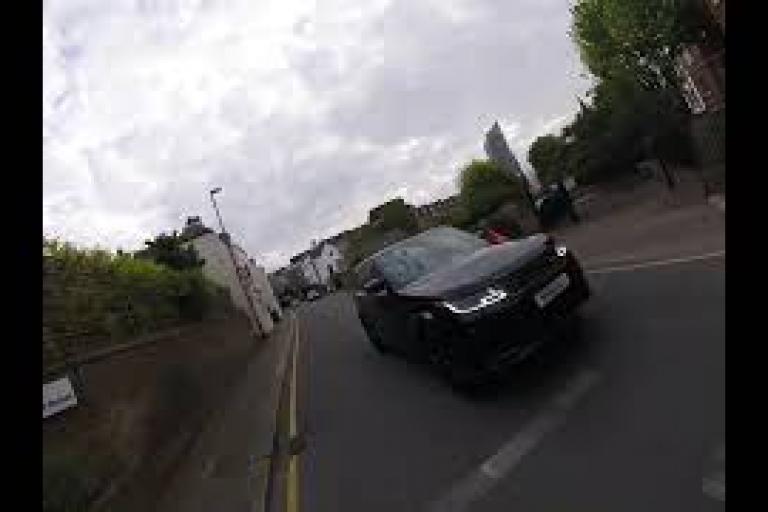 Near Miss of the Day 768: Driver squeezes between two cyclists – but only receives warning letter as rider didn’t “swerve”

Our regular series featuring close passes from around the country — today it's London
24
13 May 2022, 15:16
Koen Bouwman wins stage seven of the Giro d'Italia

Koen Bouwman wins stage 7 with some huge power in Potenza! ⚡ The Jumbo Bees got it right. 👏🐝 #Giro pic.twitter.com/o55sdpkVZZ

In the end, Tom Dumoulin was on teammate duty for faster-finishing Koen Bouwman on the eight per cent ramp to the finish line at the end of stage seven. Bouwman easily beat Bauke Mollema and Davide Formolo, and also took the KOM jersey on the road too.

Dumoulin got his arms in the air to celebrate too, crossing the line a few seconds back in fourth. No significant changes to speak of in the GC group, in fact, no changes at all. That should change over the weekend: tomorrow is an exciting-looking circuit race around the hills of Naples, Sunday takes the riders up Blockhaus...who'll still be in the race for pink come the second rest day? 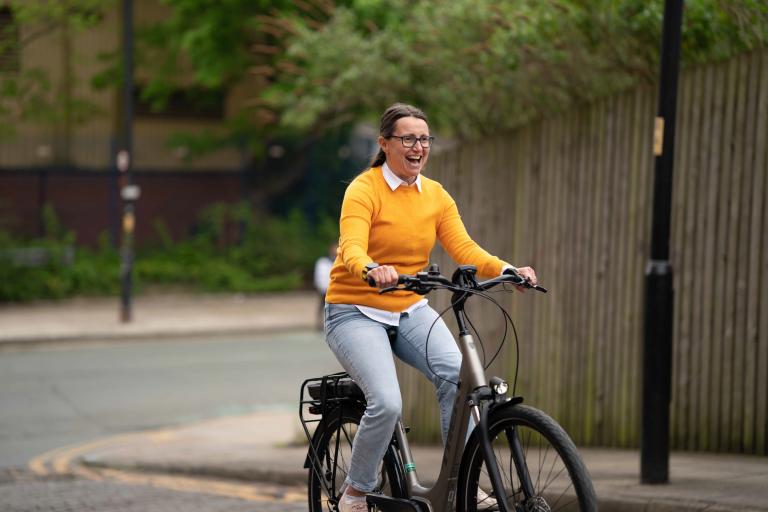 'Cycling made e-asy' scheme will provide people with e-bikes for up to three months
0
13 May 2022, 14:23
Tom Dumoulin tries, and tries again, to shift breakaway companions

We're approaching the last categorised climb and @koenbouwman & @tom_dumoulin are still part of the breakaway. Gap between the leaders and the peloton is four minutes ⏱️

29km to go...Tom Dumoulin and Jumbo-Visma teammate Koen Bouwman are at the head of the race alongside Bauke Mollema and Davide Formolo. On the final climb of the day and holding a three and a half minute advantage, it seems they'll stay away until the finish. Who will win? One of the three Dutchmen or an Italian?

Dumoulin's just launched his third attack of the climb, countered by compatriot Mollema. The next hour or so will be very interesting...

Business owners claim Tour of Cambridgeshire will cost them £10,000

“A lot of effort and consideration goes into minimising the disruption caused,” say the event’s organisers
44
13 May 2022, 13:46
'Cyclist' or person who happens to be riding a bike?

As a cycling news website which reports on crime and wider road safety issues, we often have to ask ourselves a question when deciding whether or not to run a story: is the person a 'cyclist' or just somebody who happens to be using a bike at that time?

At risk of delving deep into a semantics rabbit hole, there is, it seems to us, some cases when a person may be given the 'cyclist' tag, and others when another title might be better suited.

For example, a bank robber fleeing the scene of a crime by bike wouldn't be something we'd report on...they're a bank robber not a cyclist, even if they were riding a bike.

Where am I going with this? Well, we've seen a couple examples this week on social media and other news websites...

Please be aware of your surroundings. We have had reports of snatches of mobile phones in Hyde Park by cyclists as they pass pedestrians, especially on the footpaths where cycles are not permitted.

Would "thieves riding bicycles" be better than "cyclists"? Probably. Does it even matter? I'd be interested to hear what you think...

Question, did you consider using ‘thieves on bikes’ rather than ‘cyclists’ or not?

Because they're on a bike. Next question?

Please be aware of your surroundings. We have had reports of snatches of mobile phones in Hyde Park by people riding bicycles as they pass pedestrians, especially on the footpaths where cycles are not permitted.

Elsewhere this week, the Metro ran a story titled: 'Cyclist fined for using bank cards in wallet stolen by fox and dropped in street'. Admittedly your first question about that headline may be to do with something other than an erroneous noun...

Yes, Qasim Hussain was riding a bike when he found the wallet, and rode to the shops to use the card. Does that make him a 'cyclist'? I'd argue not.

If you're still reading this then you deserve some sort of award, but I'd be interested to hear your thoughts on the matter. It's one we deal with every day, but writing news stories and live blogs all the time can be a bit of a wood for the trees situation...some fresh perspectives would be gratefully received...

Endura has launched Global Baggies Day to remind us all to chill out and not take life so seriously...

Hearing that particular message from retired pro racers living our dream may seem a little preachy, so have a read of our sister site off-road.cc for our take on what it's all about...

In short: "Global Baggies Day is meant to be an irreverent rallying cry for everyone, including ourselves, not to take life's more minor trivialities too seriously, especially when there's plenty of genuinely serious stuff to worry about at the moment.

"So, whenever we catch ourselves fretting about the unnecessary, take a breath, and come and join us on May 13th for a ride in baggy shorts instead – a wee reminder that life's too short, not baggies, so let’s enjoy it," James Russell-Watson, Head of Marketing at Endura, said.

If you're not watching the Giro, you should be!

Not that I needed any convincing to be fair...we've been glued to stage seven...

Moments ago, and with 139km to go, Richard Carapaz, yes, GC favourite Carapaz was in an attack with Mathieu van der Poel and teammate Jhonatan Narváez. They're back in the peloton now, but it's that sort of day...get it on asap...

ITV's The Games, an attempt at entertainment — involving 'celebrities' competing against each other in sporting challenges — was back on the telly last night. And this week they had their female celebs racing a Keirin on the track at the Lee Valley Velodrome (kind of disappointed they didn't choose the Madison to be honest). What could possibly go wrong?

It was (perhaps unsurprisingly for six people who have presumably never ridden on a velodrome before) an absolute crash fest...

Eventual winner Chelcee Grimes had fallen before the race even got underway, then there were another couple of crashes once the derny was up and running. In a who's who of who the beep are you? Christine McGuinness came second while Olivia Attwood and Lucrezia Millarini both crashed out...

At least the viewers are enjoying the show...

ITV The Games. I need a F**king medal for enduring an hour of that shite!! Can’t take anymore. Absolute pile of steaming 💩💩

God knows ITV have some terrible programmes but The Games really takes the biscuit. Would rather hang the TV out the window and watch the aerial. 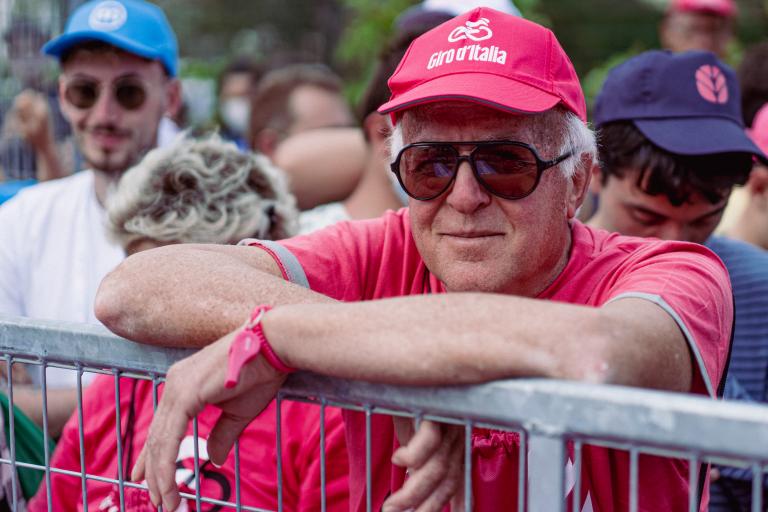 “Maybe the easiest race I’ve ever done”: Pros enjoy relaxing Giro d’Italia stage six… but could you have kept up?

Yesterday’s 192-kilometre stage, won by Arnaud Démare, finished half an hour later than the race organisers’ slowest projected time
0
13 May 2022, 09:48
POLL: Is pressure-washing your bike okay?

As with seemingly everything in cycling, nobody can agree if jet-washing your bike is safe or not. Does it blast out all that much-needed grease? Or, if it's good enough for the pros is it good enough for you?

Apologies if you're sick to death of the reminders...

James May talks bikes! | Drink at your desk Friday: We're chatting to James May, star of Top Gear and The Grand Tour, in this episode of Drink at Your Desk Friday. Settle in with a beer and hear James' thoughts on bikes, and there are many!

And for a teaser of what to expect...James May: “I can’t stand road sectarianism – it’s all b*llocks”

At least today we should get some action...

Bad news for Cav, not that he'd be winning today anyway, but leadout extraordinaire Michael Mørkøv has abandoned the race after developing a fever overnight...

13 May 2022, 07:52
"Here's a man who never buys his own bearings": Peter Sagan pressure washes his poor Specialized...and people aren't happy

Pressure pushing down on me
Pressing down on you, no bike ask for
Under pressure that wears a bearing out
Splits an S-Works in two
Puts grease on streets...

Making sure my @iamspecialized beauty is fresh and clean before we fly to Utah for a long training session!@TeamTotalEnrg @TotalEnergies @sportful @ride100percent pic.twitter.com/GjtMK1x35g

Peter Sagan is doing some of that sponsor-plugging that pro riders love to do (yesterday, Quick-Step Alpha Vinyl suggested Julian Alaphilippe could only begin his rehab on Tacx rollers) ...

Anyway, the three-time world champ has outdone the two-time world champ...sharing a video of him jetting his S-Works clean of all dirt (and grease) after a ride. He's jetting off himself too...heading to Utah for "a long training session". That kind of makes it sound like he's going to do one seven-day endurance ride and then head home...but we're not here to question Sagan's training, only his bike washing...

Anyway, the reaction to the vid was pretty predictable...

Are unlimited bottom brackets part of your contract?!

Luckily for you your mechanic will be replacing those bearings.

I’m so glad you are not cleaning my Specialised Tarmac bike!

I guess when your bike only has a lifespan of a year before you get a shiny new one, it doesn't really matter what you do to it...

Case for the defence?