Officers said rider, who was injured in North Yorkshire incident, should simply have exchanged details with motorist
27
14 September 2021, 16:04
A reader comment that sums the situation up nicely...

Road rage has appalling traits and is never a good look. How many seconds did waiting to pass safely cost him? Hardly any but his reaction cost time! Glad the headcam proved a deterrent when he spotted it. The assault is a crime but so was his driving, putting other lives at risk

Top marks to nniff for succinctly capturing the mood: "I think that the reason that so many of us are very dissatisfied with this is that I most of us have encountered comparable behaviour; perhaps not the direct physical contact, but certainly the verbal aggression and use of a vehicle to intimidate and threaten."

We've just recorded the next episode of the road.cc podcast, so keep an eye (and ear) out for that if you want to hear us rambling about the video (spoiler alert: there's also an interview with Andy Cox, whose comment above we featured yesterday)... 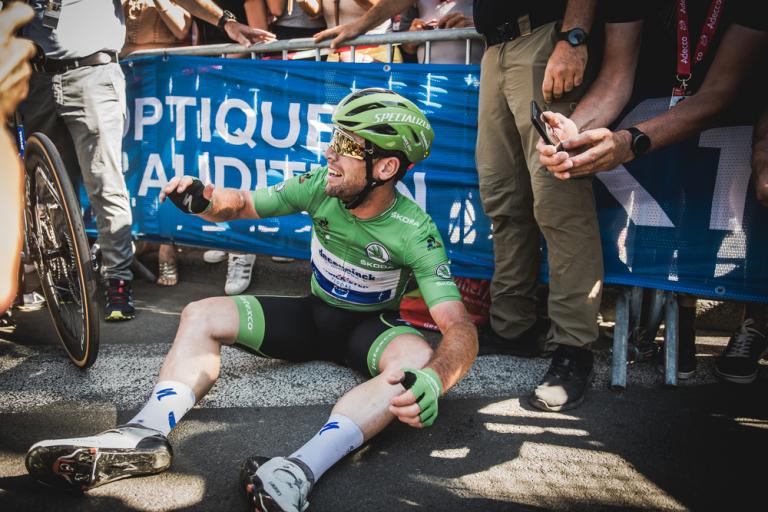 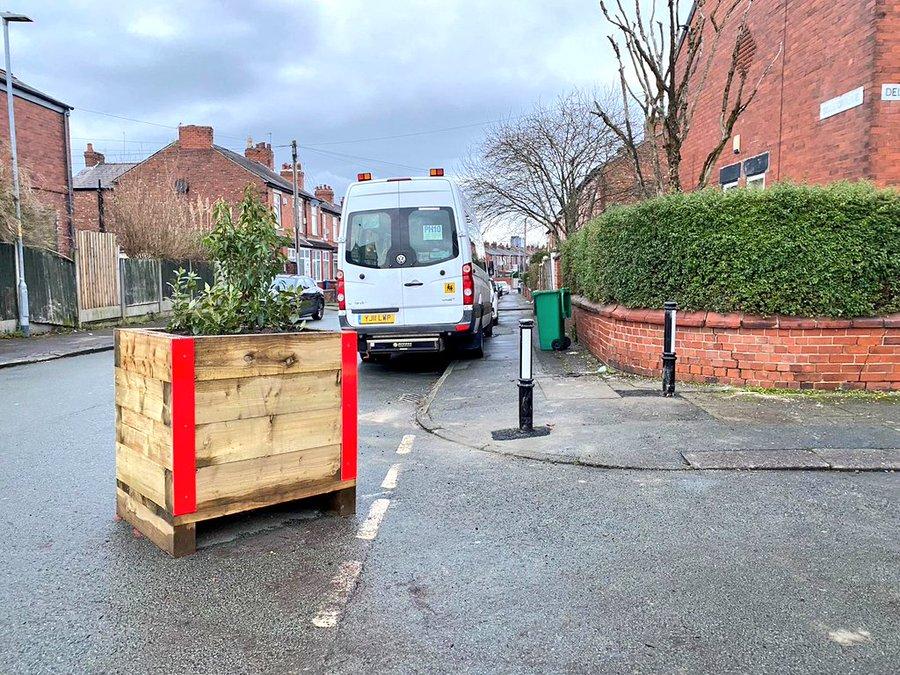 Manchester City Council has announced 14 LTN filters in Levenshulme are to be made permanent. You might remember back in January when vandals filmed themselves ramming the planters off the road. The community rallied to repair the damage and Chris Boardman said vandals wouldn't intimidate the cause.

The 14 that remain survived the initial consultation, which saw 11 removed last year following feedback from locals. Phase 2 of the trial was successful and the council says it will look for additional locations to support the existing ones, as well as other traffic calming measures across Levenshulme and Burnage.

Good news.
Engagement was lengthy but arguably the right thing to do.
Bring on elsewhere please - we need to balance needs of all people & improve our environment.

14 September 2021, 13:42
Cheer yourselves up on a grey Tuesday...Have I Got News For You uses Xander Graham to take a pop at Piers Morgan

After a schoolboy cyclist manages to outpace pro riders at the Tour of Britain, experts say he must have received coaching from Piers Morgan. Right...I'd wager 90 per cent of riders wouldn't even notice it says Raudax not Rapha...I'm just surprised these weren't in the Aldi Specialbuys we saw yesterday.

14 September 2021, 12:03
James Shaw earns another crack at the WorldTour, according to Dutch media reports

James Shaw may well have finished in the top ten at the Tour of Britain without the stage three team time trial. Regardless, the 26-year-old has earned another shot at the WorldTour and will be riding for EF Education-Nippo next year, according to Wielerflits.

Shaw finished fifth on the brutal Pennines stage to Gateshead and has consistently impressed at Continental level since perhaps unfairly losing his World Tour spot with Lotto-Soudal at the end of 2018.

He was fifth at the Tour of Norway and Tour of Slovenia this year and finished in the top five of stages at both races. British Cycling has announced the squad of 30 elite, under-23 and junior riders who will travel to Flanders for next week's UCI Road World Championships. Lizzie Deignan is joined by Anna Shackley, Alice Barnes, Anna Henderson, Pfeiffer Georgi and Joss Lowden for the women's road race. Georgi and Lowden will also do the time trial.

On the men's side of things Tom Pidcock, Ethan Hayter, Ben Swift and Mark Cavendish are just four of the cards GB can play. The hilly course will likely be too tough for Cav, but the Manxman can play a support role alongside Connor Swift, Jake Stewart, Fred Wright and Luke Rowe. What a team.

Hayter is following up his Tour of Britain second place by also taking on the time trial, along with Dan Bigham.

Performance director Stephen Park told the BBC: "The Road World Championships are a key feature for the Great Britain Cycling Team's road squad and it will be great to see the likes of Mark [Cavendish] and Lizzie [Deignan] bring their form and experience into a team keen to do the jersey proud and bring back medals.

"It will be interesting to see how the elite men's road race plays out, too - based on what we know about the course and with so many riders in top form, we've made the decision not to go with one team leader, giving us a number of options as the race plays out."

Motorists inability to overtaking safely is a common issue we deal with.

This video demonstrates how it’s safely and legally.

In amongst all the criticism for Wiltshire Police's response there's been some good educational policing going on. Surrey Roads Policing Unit, as usual, has lead the way on informing motorists online about safe pass practice.

Operation Dragoon, Northumbria Police's road safety op has also been at it...

It’s also @PoliceChiefs Vulnerable Road Users awareness week. Raising awareness of at risk road users. Cyclists are today’s focus. In 2019 102 cyclists died on the UK roads, with 3,700 seriously injured.
Overtaking safely is a common complaint we receive. This is how it’s done. pic.twitter.com/ehsOYY3hjn

This second video attracted plenty of praise...but also the usual anti-cycling sentiment. Thankfully, the Surrey Police admin was on hand to do what they do best...

You’re significantly more likely to suffer a head injury by being a driver in a motor vehicle. Do you wear a helmet when you drive?

The majority of Cycle lanes are not fit for purpose…forcing vulnerable cyclists into the drains, potholes and debris. No requirement to use them. 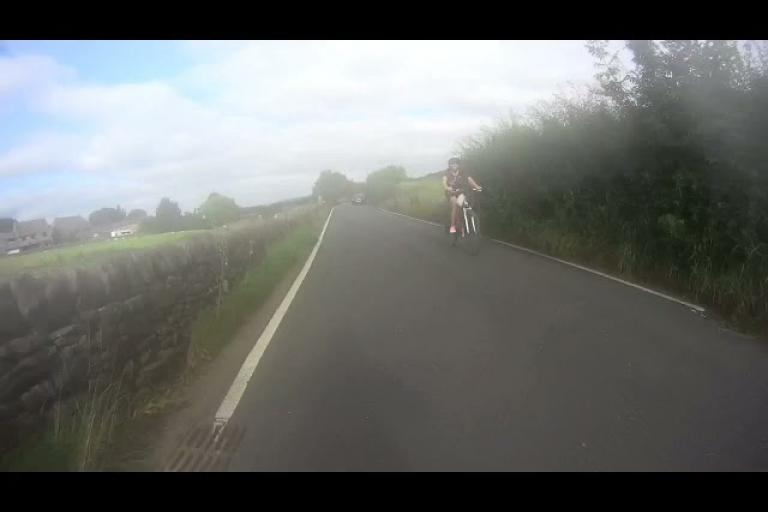 Near Miss of the Day 636: Van driver overtakes one cyclist, almost hits two others head-on

Our regular series featuring close passes from around the country - today it's Lancashire
14
14 September 2021, 09:59
Driver involved in shocking Richmond Park crash which left cyclist in hospital handed a fine and six penalty points

On 10/09/21 at Lavender Hill Magistrates Court, the driver of this Nissan pleaded guilty to driving without due care & attention. He was order to pay costs of £100, fined £150, to pay victim surcharge of £34 and given 6 penalty points on his driving license. pic.twitter.com/mJVAAdnDYt

Back in February we shared the story and subsequent calls to ban motor traffic from Richmond Park after a crash saw a cyclist taken to hospital with facial injuries. At the time questions were asked about how such severe damage could have happened in a 20mph zone?

Royal Parks Police confirmed the driver appeared at Lavender Hill Magistrates' Court and pleaded guilty to driving without due care and attention. He was ordered to pay a £150 fine, costs of £100 and a victim surcharge of £34. He also received six penalty points on his licence.

Royal Parks Police said the entire incident was caught on the driver's dash cam and the force's Twitter account gave more details on the incident: "The driver failed to see a cyclist as he pulled out of the junction with Ham Cross, with the cyclist hitting the side of the car. After the collision, the driver has mistakenly hit his accelerator instead of the brake.

"This caused him to pull away at speed down into Ham Dip, where he then collided with solid metal barriers, narrowly missing the trees. The driver was believed to have been doing about 5mph at the time of the collision with the cyclist."

Following in Lachlan Morton's tyre tracks, Jack Thompson successfully beat the Tour de France to Paris back in July having given those lazy pros a week's head start. In a lovely piece of timing, Thompson is also the current holder of the seven-day distance record Josh Quigley's out to beat this week...

Wahoo Fitness were the official supporters of the Tour challenge and filmed this cracking short documentary following his progress.

What a start 😎! Bike, rider and weather in perfect harmony. pic.twitter.com/G7OuJNJby3

Josh Quigley's latest record attempt is up and running...the ultra-endurance cyclist is having a second crack at the seven-day cycling distance world record. He unfortunately had to pull out of the first attempt back in April after succumbing to some nasty knee pain.

Yesterday was day one of the effort, which he'll be riding entirely on the same circuit in Aberdeenshire. Josh racked up 352 miles on the opening day. To 99.9 per cent of us that would be an all-time big day out. Now try six more days back-to-back...

We'll all be hoping Josh can finally get some good luck out on the road. His 2019 round-the-world attempt ended when he was seriously injured by a driver in Texas. On the same trip his bike was stolen...and he was fined for riding through Bedford town centre. Someone needs to stop smashing mirrors...

Just heard myself and @nedboulting on @BBCRadio1Offici commentating on that small clip of Xander attacking on the pavement at the @TourofBritain … my son got a shock in the car.. “Daddy is that you on the radio” 🤣🤣

You can keep your qualifier US Open win without dropping a set. Has Emma Radacanu ever attacked the breakaway at the Tour of Britain? Didn't think so. Only joking of course...what odds on Xander Graham to win the Tour by 18? Finish your exams and get out to France, lad...

Good to know for the next time anyone wants to assault someone. Just admit it and only give them a black eye and it's completely fine 👍 https://t.co/mJVZatdfB9

Some of you might have seen that Wiltshire Police got back to us last night with a statement on the video of a driver punching a Swindon Wheelers member and knocking another to the ground with their car. The driver was handed a caution...which the police force said was in line with national policy.

The reaction has continued to roll in, with many even more bewildered by the case having heard Wiltshire Police's official line. Chris on Twitter questioned the "no injury" claim: "A black eye isn't 'no injury', even ignoring all the other offences committed (as @wiltshirepolice appear to be)."

Dee McCrossan compared placed the driver's actions in a different context and questioned if the outcome would have been the same..."Crazy. If someone throws hands like this outside pubs/clubs they get charged with assault...Not to mention the assault with a vehicle on his partner...beyond words."

The classic…. motorist objects to being held up by cyclists, so aggressively passes…. But then slows down to dick about and prolong their delay. Can’t be in that much of a rush then.

A black eye = no injury? Since when?

That is exactly the outcome I would expect had that been a police officer repeatedly assaulted and another officer run over. Exactly this outcome.