"Bye bye family cycling": Disappointment as council brags of "exciting new plans"... only to rip out cycle lane segregation; Intermarché–Wanty–Gobert join public roasting of Adam Levine; One of the best sprints you'll ever see + more on the live blog

Dan Alexander is in position, ready to get your weekend started with Friday's live blog... Near Miss of the Day 825: Police refuse to prosecute because cyclist swore after driver pulled out on him

It's déjà vu in this edition of Near Miss of the Day, as a cyclist who was nearly hit by a driver pulling out of a side road was told no prosecution will happen because of his conduct
72
23 September 2022, 15:31
Annemiek van Vleuten WILL start World Championships road race 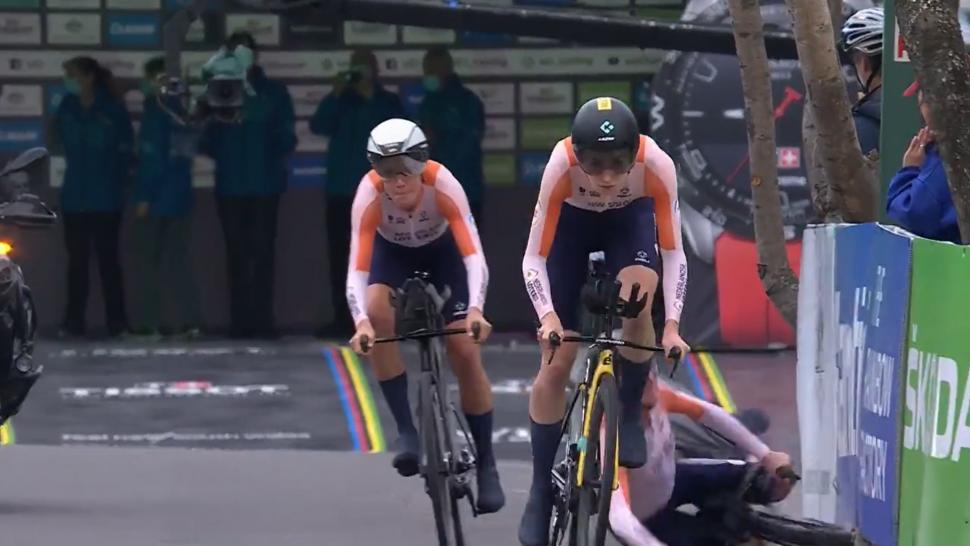 After the mixed relay crash which put her participation in tomorrow's road race in doubt, the Netherlands cycling federation has confirmed Annemiek van Vleuten will be on the startline after all.

Very nice news from Wollongong: Annemiek van Vleuten will ride the road race at the World Cup on Saturday. In a final test today, the recovery turned out to be sufficient to be able to participate

The hints were all pointing towards the all-conquering star of the sport taking part, with national coach Loes Gunnewijk yesterday saying Van Vleuten had been able to get out the saddle and can "make the best of" the situation.

It's a bike lane kind of day on the live blog. Brace yourselves for this one...

Yeah supposed to parallel park. Its been an unfinished surface for years so a free for all. Now that they are marking and finishing the surface, the bad habits aren't going away anytime soon

> Why Silca is at the cutting edge of cycle tech

23 September 2022, 13:36
Apologies for the quieter than usual live blog updates, dipped out to write this, but will have some more posts soon... 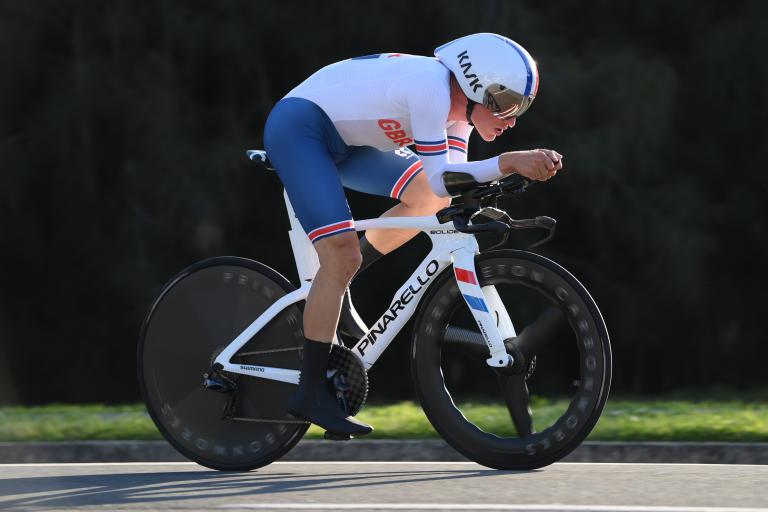 Cycling the coast of Britain is magical by being close to the sea#roundbritain pic.twitter.com/vvQdPPM48N 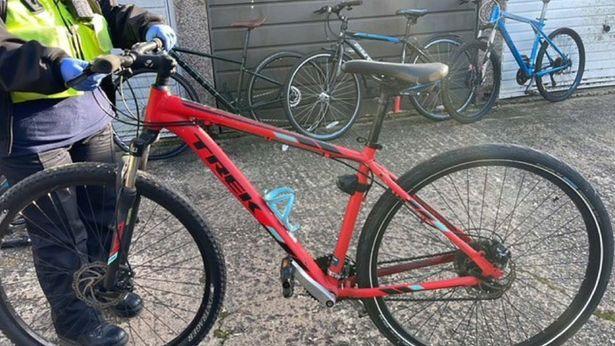 Hertfordshire Police are appealing to theft victims after a cyclist tracked his bike's location to a property where officers then found a further 44 stolen bicycles. A 53-year-old man from Bushey was arrested on suspicion of theft and has been released under investigation, the Islington Gazette reports.

Investigator Kay Leverton said: "We are releasing the images of these bikes that were recovered as we suspect they may also have been stolen and are hoping to reunite them with their rightful owners.

"If you think one of the bikes may belong to you, or if you have any further information you think may assist with our investigation, please get in contact with me via email."

Images of the stolen bicycles...

Council: Listen up everyone, we've got some exciting new plans about your high street. We know how important this is for you so we've thought long and hard and can't wait to tell you...(drumroll please)... we're going to rip out the cycle lane segregation to make it a more people-friendly area...

Spoke too soon. They're going to replace our cycle lanes with wider pavements and bus lanes. In their press release they said we will 'benefit from using the extended bus lanes to cycle along the high street'. Because everyone wants their 11 year olds to cycle with buses right? https://t.co/BOPrdYlLNB

Not keen on kids having to share lanes with buses and other bus lane users eg taxis. How will cyclist safety be maintained beating in mind that large numbers of children cycle to school along the High Street?

If it doesn't have protected cycle lanes, it's not an exciting new plan, it's a backward step.

Newcastle City Council broke the news with a tweet promising "exciting new plans" before, in the press release, adding: "Plans would see improvements made to Gosforth High Street to make it a more people-friendly area, with widened pavements, green infrastructure, seating and cycling parking, as well as measures to prioritise public transport.

"This includes bus lane provision extended on the approaches to Gosforth High Street, with the current bollards removed and replaced with widened pavements for seating and planting to improve the attractiveness of the area.

"The intention to reclaim the space permanently for people who are walking or wheeling will mean this High Street, which currently has some of the narrowest footpaths of any comparable shopping street in the city, would be a nicer place to be."

Here's what the previous lane looked like — although far from perfect, I'm sure some would argue — and how it enabled children and families to access the route by bike...

Many drivers have complained about these lanes but this is what they make possible - thanks to @NewcastleCC. Would be great if the painted man could be turned into a cycling girl 😀 @JaneLabour pic.twitter.com/rlHe2DsQnw

But hey, cheer up everyone, at least "reclaiming the space permanently for people who are walking or wheeling" will "make it a nicer place to be"... 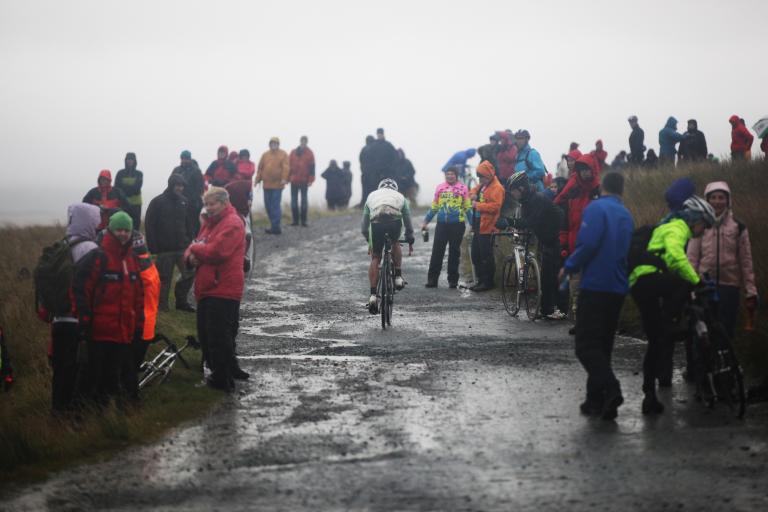 The world's toughest cyclo-cross race is back: inside the legendary Three Peaks

This weekend sees the staging of one of the world’s great bike races, and it’s not in Australia...
5
23 September 2022, 10:03
2023 UCI Road World Championships road race routes revealed — Loch Lomond and Edinburgh to host starts 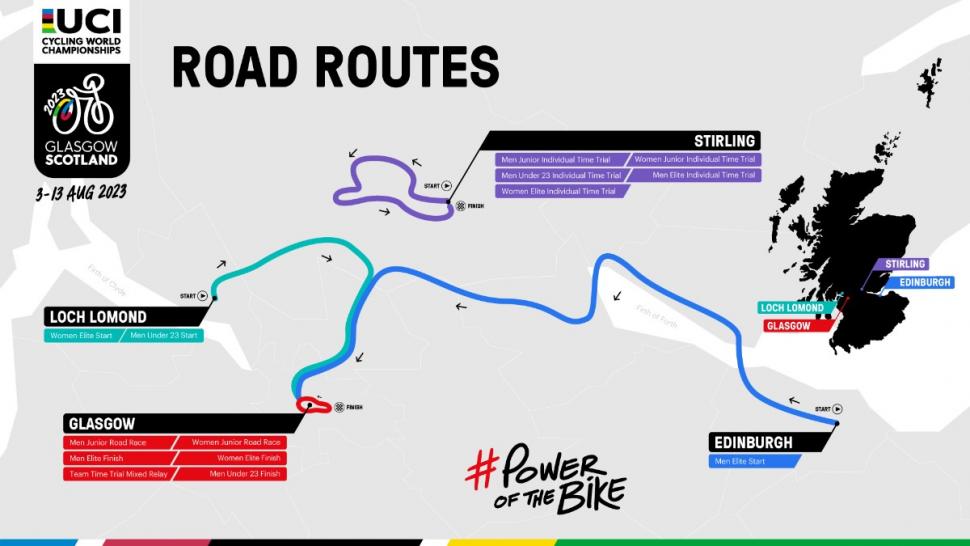 Edinburgh and Loch Lomond were today unveiled as the official venues and starting locations for the elite and U23 races at the 2023 UCI Cycling World Championships.

The men's route will take the riders 277km from Edinburgh to Glasgow with 3,167 metres of climbing, while the women's race ascends 1,930 metres during the 157km route from Loch Lomond.

The majority of the races will be around a 14.4km "technical circuit" in the centre of Glasgow, comprising of punchy short climbs and a finish at George Square.

Full details can be found here...

The junior men's road race had a dramatic finish overnight...

This must be one of the best sprints for the Rainbow Jersey I've ever seen. 💥🌈 Emil Herzog beat Antonio Morgado, they will be teammates next year. It was definitely worth it to lose some sleep and watch this. #Wollongong2022
📽️ @StanSportAUpic.twitter.com/8rS3U2mGMM

Both go to Hagens Berman Axeon for next season, the team responsible for developing João Almeida, Jasper Philipsen, Neilson Powless and Tao Geoghegan Hart. Two new names for the future.

In the U23 race, Kazakhstan's Yevgeniy Fedorov won, with Samuel Watson Great Britain's highest finisher, in 14th. Tomorrow morning the elite riders join the party, beginning with the women's event before the men follow on Sunday morning.

Set your alarms bright and early and get some pre-ride inspiration over your porridge...

2022, eh... what a weird time. A time when professional cycling teams now take to social media to score meme victories against celebrities. Following on from Lotto-Soudal's Leonardo DiCaprio 'banter'... Intermarché–Wanty–Gobert have joined the celebrity-roasting party, editing this leaked message from Maroon 5 singer Adam Levine to someone other than his wife...

Adam Levine reaction when he saw Intermarché-Wanty-Gobert in 4th place of the UCI World Ranking pic.twitter.com/lPvvN1NOSN 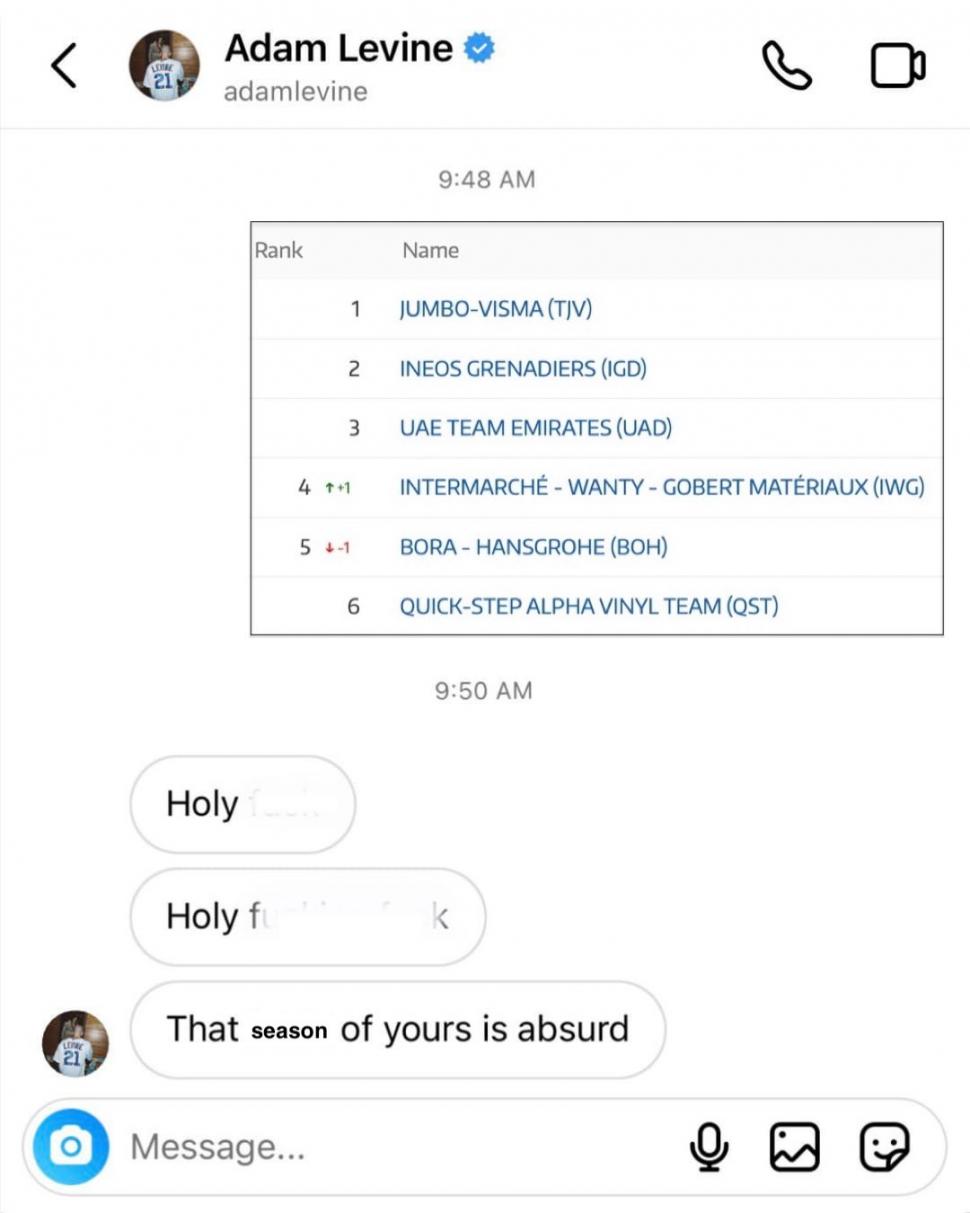 Clarification time (mainly for if you're, quite reasonably, currently sat there wondering who is Adam Levine and what is a Maroon 5?)

2. Maroon 5: aforementioned American 'pop rock' band. Not worth your time, I promise...

4. Levine denies allegations: despite the leaked DMs — which will probably have your head hurting through sheer cringeworthy terribleness — and more women coming forward with similar allegations, Levine says: "I used poor judgement in speaking with anyone other than my wife in ANY kind of flirtatious manner. I did not have an affair; nevertheless, I crossed the line during a regrettable period in my life." 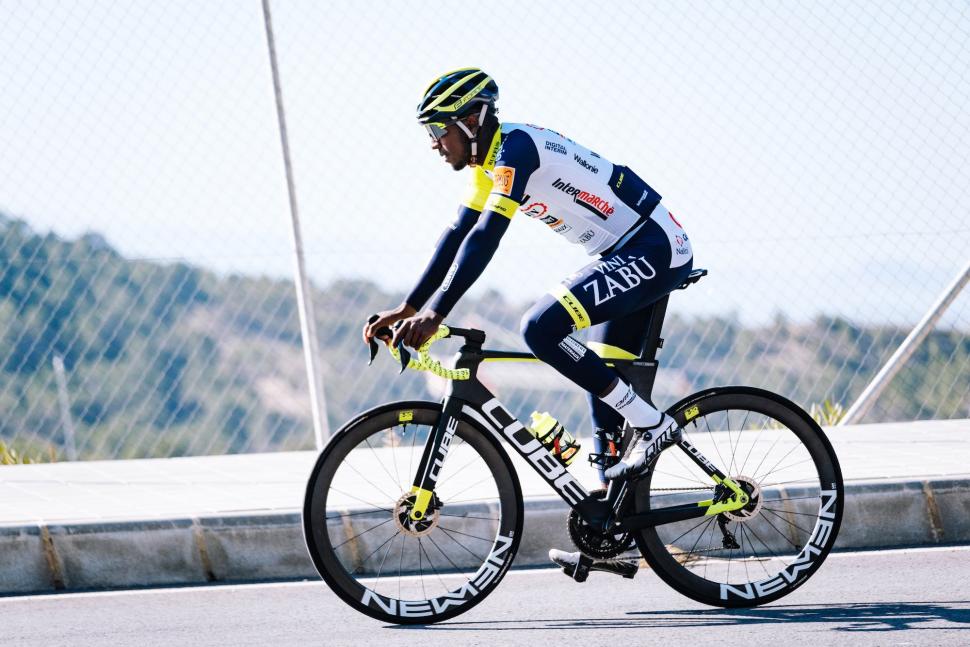 Anyway, the damage has been done — a Belgian World-Tour cycling team has taken the piss out of him... While Levine was left to wonder 'how will I ever recover from this cycling team roasting?', Intermarché–Wanty–Gobert's admin bathed in the applause...

Take tomorrow off. You've earned it. 👏👏👏