"Did a car write this?": Bizarre anti-cycling paintwork warns 'no bycles' allowed; Pineapple passion permeates peloton; Wiggo: It's f****** obvious Cav deserves a place in the peloton; Almeida OUT with covid; Photo of the year + more on the live blog

It's Thursday live blog time and Dan Alexander is here, ready to take you one step closer to the weekend... 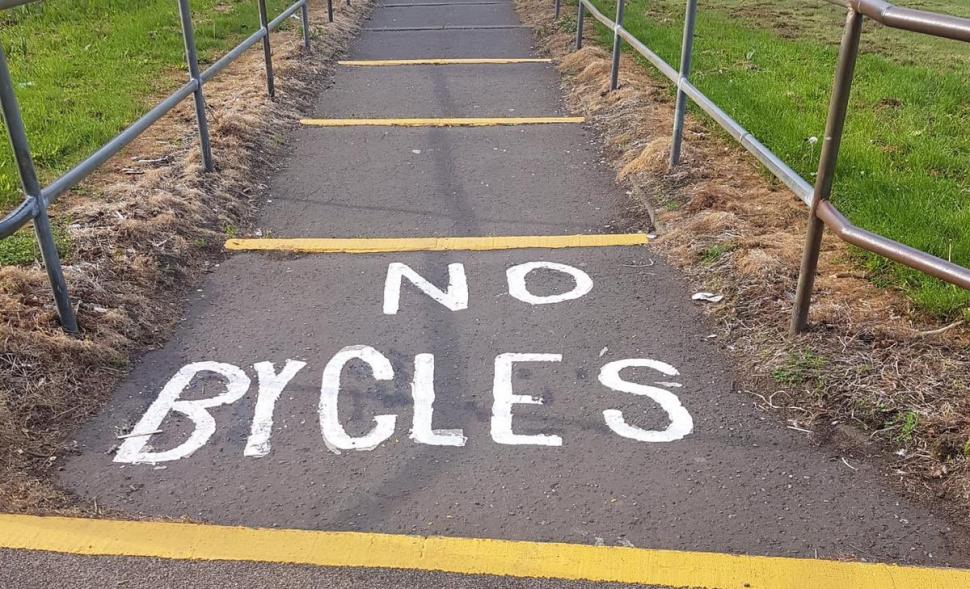 26 May 2022, 15:34
Power of pineapple: Dries De Bondt becomes the third Alpecin-Fenix rider to win a stage of this year's Giro d'Italia

Yesterday, Dries De Bondt was pictured carrying a pineapple up a climb, today he won from the breakaway...coincidence?

Well, Davide Formolo was snapped with some pineapple too, but alas did not win the stage. Then again, only one person can on any given day, so maybe tomorrow's Davide's day...

De Bondt beat Magnus Cort, Edoardo Affini and Davide Gabburo to the line, behind, the frustrated sprinters were led home by Alberto Dainese and Arnaud Démare. Mark Cavendish was eighth. Jai Hindley's late puncture meant he could roll across the line stress-free behind the peloton. Juan Pedro López found himself the wrong side of a split and lost 2:43 on the peloton, but remains fairly comfortably in the white jersey ahead of the final two mountain stages and final day TT.

There'll surely be pineapple on every dinner table tonight...

According to a father a "big cat" chased his son as they cycled through woodland near Doncaster, YorkshireLive reports. Martin Abonyi and his son were cycling in Black Carr Plantation, Doncaster, when the dad says a "large black animal" ran towards his son.

"My son was riding about 30 yards in front of me. As we rounded a corner I saw out of the corner of my eye a large black animal sprinting out from the cover of the woods heading directly for my son, running diagonally to head him off.

"My first thought was of a large black dog as I wasn’t geared up for expecting anything else. The woods are popular with dog walkers, so I quickly looked to my left to see if I could identify the owners of the dog.

"I was a bit concerned at the animal's intentions at this stage, but when I looked back to see if it was close to my son, the animal had disappeared.

"It looked like a very large cat and not a dog, there were no owners or other people in sight or earshot.

"The animal also had to traverse a short section of bracken and undergrowth to get to my son, so the only conclusion I could draw was that it saw me coming, aborted its attack and was laying up in the bracken.

"Pet dogs simply don’t do that. The cover was not that dense so it must have been hiding well. I only told him later when we were out of the woods so not to cause alarm, but he was quite shook up when I told him."

The father apparently returned to the woods with a 'big cat investigator' in the days after the incident, reportedly finding an animal scrape and "what looked like a large cat paw left in fresh earth about 100 yards away from the original sighting". Another member of the public claims to have seen a large cat in the same area on Saturday 22 May, four days after Martin's incident.

I actually like that word. “I have 2 Bycles” has a ring to it

You know what would be really embarrassing? If while taking the piss out of someone spelling bicycle 'bycle' you spelt it 'bycycle'...yeah, really awkward...thanks for that...anyway... 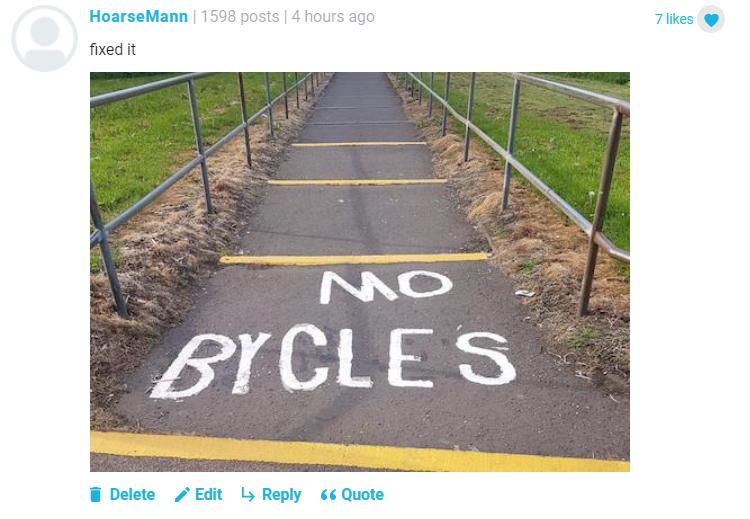 On Facebook, Keith Werrett wrote something very relatable..."I think it must have been written by somebody who was brought up with computers. The mistake is because there is no spell checker in a tin of paint or a paint brush."

Facebook always delivers to be fair. One of our less regular readers, I'd imagine, wrote this..."Perhaps it stands for Boring, Yapping, Cyclist, Lycra, Entitled, Snobs?" Glad you took time out of your day to visit us x.

"If brains were dynamite they wouldn't have enough to blow their nose," Antony Jordn commented. Torc Torr Ance added: "The days of proper English are went."

Colin Davis reckons: "It seems to me like a bunnyhop challenge - can you get enough speed up to miss just that one step?"

Lopez is the new wear of the Maglia Bianca, after Almedia has had to withdraw. #Giro #GiroDItalia #Giro105 https://t.co/uS8Q89L5lx pic.twitter.com/2OMvFhq3rb

Juan Pedro López is the new leader of the youth standings at the Giro. May as well just keep his Trek-Segafredo jersey on...as big a crime as some of those less flamboyant national champs' jerseys we've seen become sadly all-too-common in recent years...

road.cc Oli chucked us a heads up about Peter McKinnon spouting off about cyclists, saying he's a "HUGE" YouTuber...so naturally, no offence to the photography YouTube scene, I'd never heard of him...

Having said that, he does have 5.72 million subscribers, roughly the same as the number of people who live in Denmark...

Amazing how someone simply riding a bicycle prompts so many to run their mouth on social media...go enjoy yourself (and five million subs)...nobody on a bike is going to ruin your day... 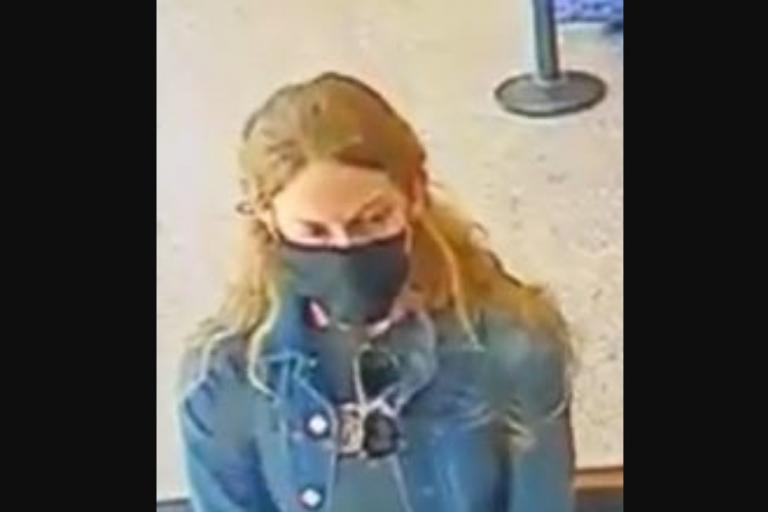 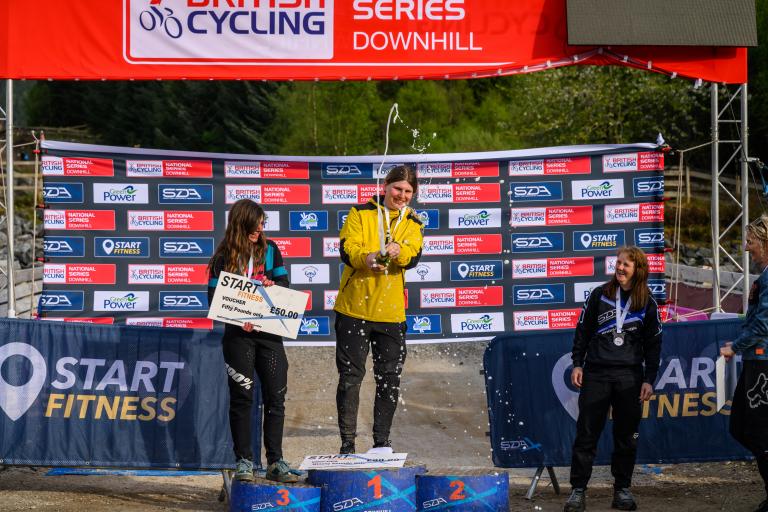 Maxine Yates won the expert category in the women's downhill national series last weekend
0
26 May 2022, 11:02
"The Greenways will enable walkers, cyclists, HORSE RIDERS and other non-motorised users to travel sustainably into the city"

"The Greenways will enable walkers, cyclists, HORSE RIDERS and other non-motorised users to travel sustainably into the city" Pg74. Is this a DAFT or a draft document? Horse riding is NOT compatible with utility trips into City on foot/bike for 8-80yrs. https://t.co/5uZO9YP3vE

One of the stranger things I've read this week...page 74 of Cambridgeshire and Peterborough Combined Authority's Local Transport Plan draft...

To underpin the vision for public transport within Greater Cambridge, significant investment will continue to be made in the active travel network across the sub-region. To persuade people to walk and cycle more, we need to provide safe, integrated, convenient, and high-quality routes and crossings, to segregate people from traffic and protect them at junctions. To spread Cambridge’s cycling culture further into the rural parts of South Cambridgeshire, twelve Greenways will be developed and connected to the city centre. The Greenways will enable walkers, cyclists, horse riders and other non-motorised users to travel sustainably into the city.

Someone at the council has been playing too much Red Dead Redemption..."where you off to, love?" "Just going to nip to the shops to get some milk, I'll leave the keys here, I'm taking the pony..."

A friend of a road.cc friend has set up a global teacher's cycling club "to help teachers feel more together!"

The Teacher Peloton hopes to help a community of teachers (who all happen to love riding their bikes) alleviate "the strain that we put ourselves under, so join us and be part of our community." They are riding RideLondon to raise money for Inspire Malawi and are running this jersey raffle as an incentive to donate to a great cause...

Ashley Gruber is the wizard behind this magical shot of the GC favourites yesterday...

I missed the free pineapple climb? Did i do a different route?

Yates' fall on Mount Etna and subsequent knee problem (likely edema of the bony spongiosa of the patella) weighed down on the rider for all following stages of the Giro d’Italia.

Despite daily therapy and Simon's tenacity, that resulted in a second stage win, the knee pain grew worse and worse, eventually leading to the decision for his retirement from the race. 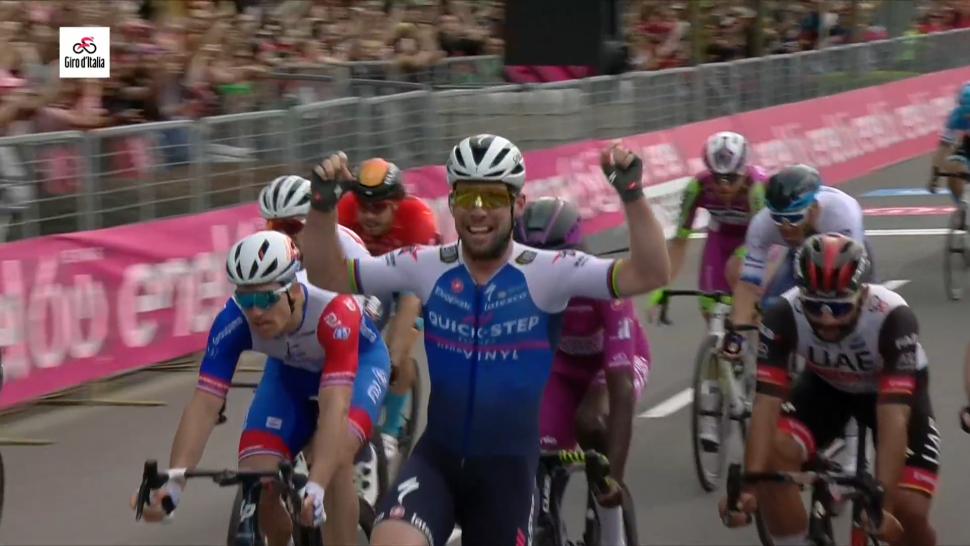 Mark Cavendish has more than enough to deserve a contract with another team in 2023, even if his time with Quick-Step Alpha Vinyl looks likely to end. That's according to Sir Bradley Wiggins, who told Cyclingnews "it's fucking obvious" his former teammate can still do it at the top level.

"Until someone dislodges Cav from that top sprinter's spot, then we shouldn't even have to debate about his future. It's fucking obvious he still deserves a place in the peloton," Wiggo said.

"He's still winning stages at the Giro and races like Milano-Torino, so surely teams will want him. I'd want him in my team if I was a team manager.

"I don't understand why Patrick Lefevere doesn't say that Cav can have a contract for as long as he wants one. But if Patrick Lefevere won't give Cav a new contract, then Rod Ellingworth has to take him on at Ineos Grenadiers and give him a perfect send-off. Why not?" 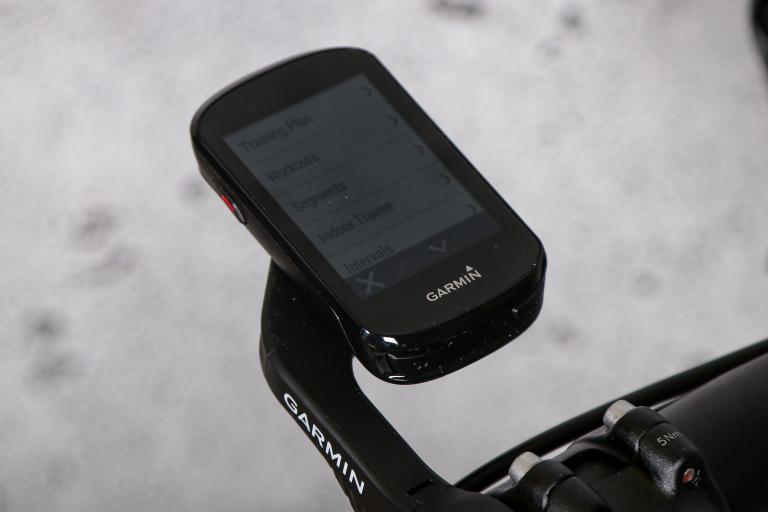 WHAT IS GOING ON pic.twitter.com/NhTPOUmCNZ

It seems there was a fan at the top of yesterday's final climb dishing out pineapples to deserving riders. Dries De Bondt got one, presumably to pass on to teammate Mathieu van der Poel. Maybe just maybe Mathieu's generational cycling talents are breaking down the walls of division built by non-Italians putting pineapple on pizza?

Davide Formolo was another lucky recipient...

😂 Things are getting out of hand.

AG2R Citroën's Lilian Calmejane later tweeted: "Thanks to the guy dressed as a chef with a cast iron pot and a pineapple who, for two days, has given me too much smile in the passes by encouraging us! This is also the magic of the great tours, of cycling, thanks to the supporters."

Meanwhile, Calmejane's teammate Lawrence Naesen was too busy just trying to get to the finish to notice any chef dishing out pineapples... 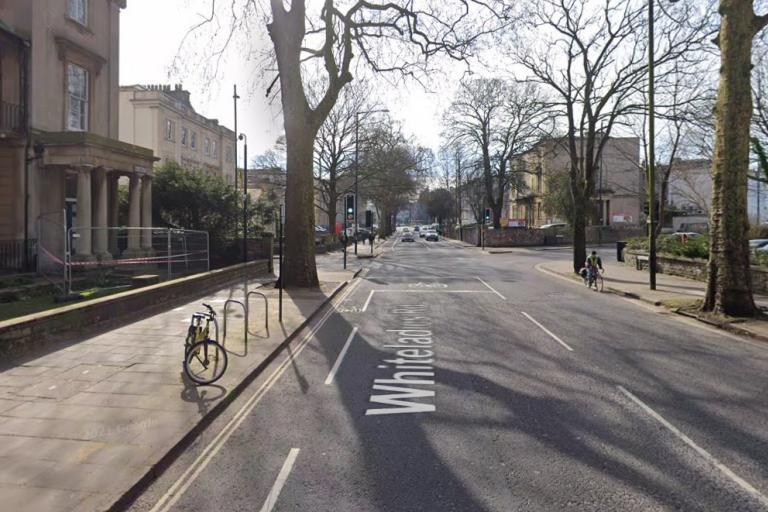 Critics of decision now undergoing consultation say blocked drains are the real problem
34
26 May 2022, 07:54
"Did a car write this?": Bizarre anti-cycling paintwork warns 'no bycles' allowed

10/10 for the ingenuity of creating a new word to fit the space available. We'd expect this to say 'NO BICYcles' in rapidly reducing font size as the 'artist' behind it realised they hadn't left enough room. But no, instead, they've just created a new word...no rgrets...

One amused onlooker suggested all that's missing is a rogue apostrophe and this masterpiece would be complete...

Did a car write this?

Damn! I'll leave my bycle at home and take the bicycle instead

Is that a new perfume?