Why don't cyclists use cycle lanes? Take a spin down the A12 bike path in Suffolk with its charming cracked surface, obstacles and oncoming traffic https://t.co/CnTI1qvMzT #cycling pic.twitter.com/aqoUpB9Z98

I said this would happen. And, to be fair, the rubbish we've had sent in makes the A12 look like an Olympic velodrome...

For starters, this back alley swimming route Sally Smith submitted is something else...

Tried out the new commute today. To avoid getting killed by a lorry opted for the blue signed cycle network route home. What a shitty country we live in for cycling infrastructure. A long video but watch to end for the grand finale of shite. pic.twitter.com/FZzthcT2qa

Or how about this hard shoulder-looking 'cycle lane' that is apparently Cheshire's finest...Yeah, I think I'll stay on the road thanks...

And from Yorkshire...It's nice of the authorities to think of those training for cyclo-cross season when picking cycle paths. Just make sure you stick to the right side of that white line...

Only one man in history has won the Tour de France and Olympic Time Trial in the same year, can you guess who it is?! @Eurosport_UK @discoveryplusUK @SirWiggo pic.twitter.com/JcybcQfCJ4

Meanwhile, in the land of Pog...

This is @TamauPogi right this moment. I think he’s not joining @SirWiggo’s club this year. 😂 pic.twitter.com/nasTY4NVx1

His family expresses their deep appreciation for all of the prayers, support and concern. They now ask for privacy and continued prayers during this difficult time.

The family is planning to hold a celebration of a life well-lived, with details to be shared later. https://t.co/vn0wxDWrgS

Retired Republican politician US Sen. Mike Enzi of Wyoming has died aged 77 after suffering major injuries in a cycling crash. Police say nobody else was involved in the incident near Gillette, Wyoming. Enzi was airlifted to UCHealth Medical Center of the Rockies with a broken neck and ribs after the accident on Friday, but passed on Monday having failed to recover consciousness.

Near Miss of the Day 619: Close pass followed by punishment pass gets driver a “stern talking to” from the police – and nothing more

Our regular series featuring close passes from around the country - today it's Buckinghamshire
16
28 July 2021, 14:16
Tom Dumoulin: I have decided to continue racing Moments after returning to the top of the sport, winning his second Olympic medal, Tom Dumoulin confirmed he has decided to make his comeback permanent. The Dutch rider walked away from pro cycling in January, taking a break, but returned with the Games TT as his big goal for the season. Afterwards, Dumoulin told reporters he is keen to continue.

The Jumbo-Visma rider said the World Championships in Belgium will likely be his next big goal. For now, he can bask in the glory of a second silver medal to go with the one he won five years ago in Rio.

"Gosh, proud. I'm happy. What this means?" he continued. "This was my goal, to get a medal today. I didn't know for the past few months if it would be possible. I also tried to wonder as little as possible. I wanted to enjoy the process here. And it actually worked out really well. I've had a few really nice months preparations behind us. To end it like this is fantastic. For me, this is silver with a gold edge."

This is marked on the map as the A12 cycleway, between Capel St Mary and Stratford St Mary. Go on, complain to me about how "cyclists" don't use those perfectly good bike lanes built for them. pic.twitter.com/wai8ImAniI

Georgina Wilcox's exasperated "really?" on seeing the next stretch of the A12 'cycle lane' in Suffolk sums this one up. Off the road and onto a narrow, overgrown stretch, she decides "it's not too bad", how bad must the previous bit have been?

Then out onto the luxuriously wide surface running right next to the A12, facing oncoming traffic. The cracks in the path add...character? And then the final stretch where the overgrown bushes make it only just wide enough for one rider to squeeze through...At least there's the welcome sight of a petrol station forecourt and all the carbs in the world at the end...

The worst thing about this is probably the incoming comments from you lot up and down the country who have a lane like this or something similar in your area. In fairness, it's probably not that bad if you've got wide tyres, don't need/want to be anywhere in a hurry, like road noise, and don't meet anyone coming the other way...

Everyone hates pavement cycling, until you paint a little bike on the pavement and then it's "why aren't you in the 'bike lane'"

It's fantastic to see you join the @INEOS sporting family 🤝 pic.twitter.com/VQ3YdP3HHu

The historically dominant force in world rugby has joined the 2010s dominant force in F1 and pro cycling as part of the growing Ineos sporting empire. Sir Dave Brailsford welcomed the New Zealand rugby team with a recorded message from the Tour de France in Paris..."A warmest welcome, when asked who are the best in the world, the reference point has got to be the All Blacks. We couldn't be more excited."

The Ineos Grenadiers team boss appeared in the clip with seven-time Formula One World Champion Lewis Hamilton, Mercedes CEO Toto Wolff and other faces from across the group's extensive sporting empire. The Ineos Group already counts Sir Ben Ainslie's America's Cup challengers, French Ligue 1 side OGC Nice and Eliud Kipchoge's sub-two hour marathon record amongst its interests, but this is its first venture into rugby.

At a quick glance you probably wouldn't assume cyclists and rugby players have too much overlap...Perhaps Filippo Ganna could do a job in the pack, or sneaky Richie Carapaz at scrum-half...However, you can be sure Dave B will be off searching for some more marginal gains off the Kiwis to strengthen the team's Tour de France chances in the coming years. Patrick Moster urged Nikias Arndt to “catch the camel riders,” referring to riders from Eritrea and Algeria ahead of him on the road
33
28 July 2021, 11:15
New individual pursuit world record...but not at the Olympics: Zoe Backstedt sets new best junior time The records are falling and the track cycling events at the Olympic Games haven't even started yet. Zoe Backstedt set a new British record and world record this morning at the HSBC National Youth and Junior Championships in Glasgow with a time a full second faster than the old best time set by Ellesse Andrews. Impressive. Near Miss of the Day 618: Morrisons lorry driver in close pass on two cyclists (includes swearing)

Our regular series featuring close passes from around the country - today it's Aberdeenshire
18
28 July 2021, 09:38
Christina Mackenzie on the road in pursuit of Land's End to John O'Groats record

Here we go. Christina Mackenzie is off on her LEJOG record attempt. 52 hours and 45 minutes is the time to beat, a record which has stood unbeaten since 2002. At the first checkpoint at Cornwall Services, Christina was nine minutes faster. Only 800+ miles to go. Up, up, up... 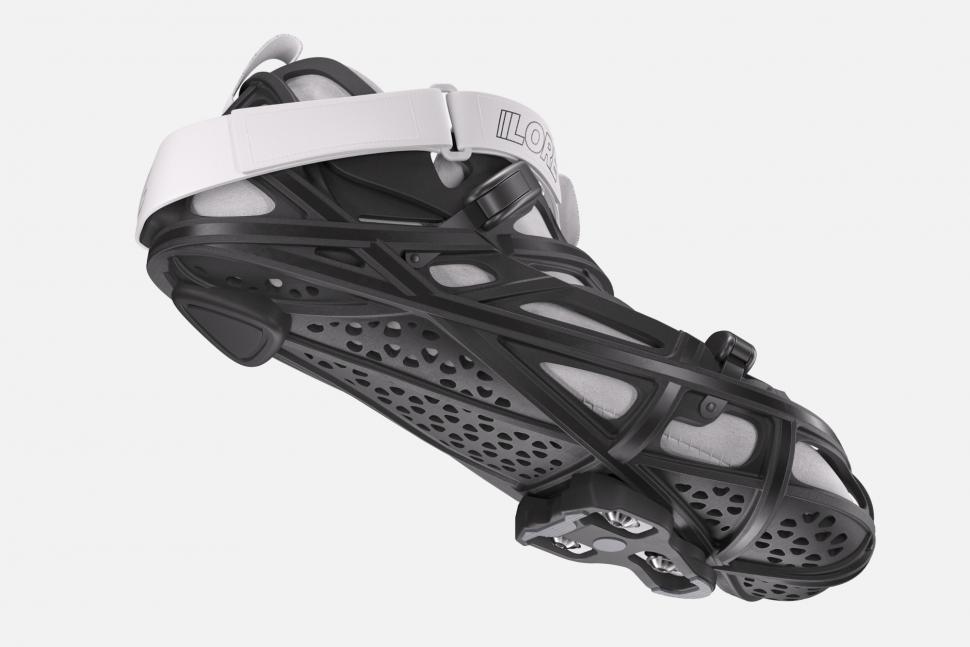 In reference to the rather unusual LoreOne shoes that will cost you a princely £1,378, we'd expect nothing less from a reader named RoubaixCube. Chapeau!

28 July 2021, 07:37
Cyclists unconvinced by "empty words" commitment to active travel as bike lane to be ripped out

What was the explanation?

We love cycling but not on our direct routes because CARS! 🥴 https://t.co/0xx3s6wiAQ

Yesterday we brought you the news that Liverpool City Council's cabinet member for climate emergency, transport and environment has announced a protected cycle lane on the city's West Derby Road will be ripped out. The reason? It had been installed without consultation and was apparently causing congestion. Last night, Cllr Daniel Barrington appeared in a short PR-friendly clip on the council's social media accounts to reassure cyclists, "We’re still committed to active travel and cycling".

Said vid was not received well...Jennifer James asked: "How does this square with the public health efforts in Liverpool? Cycle lanes offer the opportunity to be physically active and provokes positive cardiovascular and metabolic effects which are beneficial to health? Confused by this decision."

Others asked why the decision had been taken so suddenly? And suggested a genuine commitment to active travel would have seen the lane kept in place until alternative safe routes were provided...

An utterly feeble decision, spineless and in the face of evidence... 100,000 trips in its first year.

Shot a video on a dual carriageway and justified the decision to rice the bike lane with there not being enough space for cars. OK champ.

If you were actually committed to active travel you would have waited until the alternative route was in place before removing this one. What do the 5000+ people a day using it do now, get in their cars? How is that going to help traffic, the environment, or health?

“We’re still committed to active travel and cycling.” As long as you drive somewhere else to do it.

No one can't stop Roglic. Not even the finish line. pic.twitter.com/M0UAlVQp3z

28 July 2021, 08:09
Primoz Roglic storms to stunning TT gold winning by more than a minute as Tom Dumoulin takes silver ahead of Rohan Dennis in third 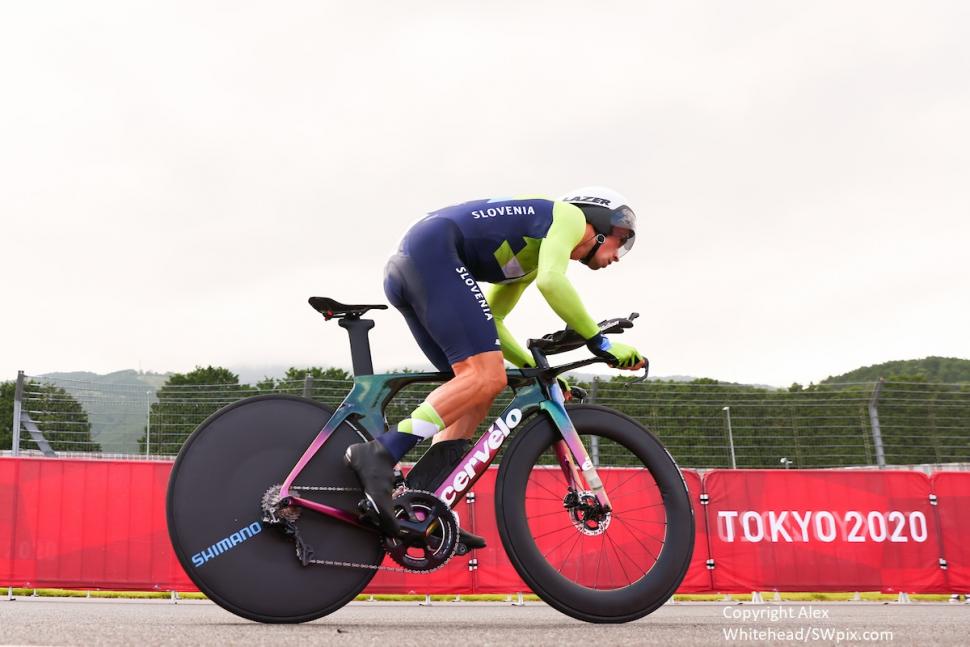 Primoz Roglic of Slovenia has put his Tour de France disappointment behind him to take a convincing victory in the men’s individual time trial at Tokyo 2020 today. Behind, there was the tightest of battles for Olympic silver and gold, Tom Dumoulin of the Netherlands runner-up for the second Games in a row and Rohan Dennis of Australia third.

The fastest time from the second of the three groups of riders out on the road came from Colombia’s Rigoberto Uran, beating the previous best time set by Belgium’s Remco Evenepoel by 2.58 seconds, as he came home in a time of 57:18:69.

By then, the final group containing the main favourites were heading out onto the course, which covered two laps of the Fuji Speedway Circuit, and six riders were within a quarter of a minute of each other after crossing the finishing line for the first time, with the fastest time posted by Roglic.

It was former world champion Dumoulin who set the benchmark time for those aiming for the podium to beat, the Dutch rider going 1 minute 13 second faster than Uran, but that was smashed by more than a minute by Roglic shortly afterwards as the rider, whose Tour de France hopes were wrecked due to an early crash, rode to gold.

The Slovenian put in a storming second lap to take a convincing victory, his time of 55:04.19 just over a minute faster than his closest rider. Team GB’s Geraint Thomas and Tao Geoghegan Hart both finished well down the field, in 12th and 29th place respectively.

"Was there someone in front of me?" 🙊 pic.twitter.com/nWjfFSHb8R The so-called "Dutch curse" in cycling at the Tokyo Olympics has been lifted with Annemiek van Vleuten winning the women's individual time trial. Marlen Reusser of Switzerland nearly a minute back in second place and a second rider from the Netherlands, Anna van der Breggen, finishing third. Team GB's Anna Shackley was 18th, four minutes down on the winner. All credit must go to road.cc's news editor Simon for the early start too - the real hero of the morning's action.