"Keep your hands to yourself, it's not difficult": Fans left uncomfortable as Lorena Wiebes forced to ride away from "hands-on" race marshal; Flanders or Huddersfield? Check out this savage cobbled climb; Cycle lane sweepers + more on the live blog

Happy middle of the week! After your brief — but I'm sure much-needed — mini-break with Ryan, Dan Alexander is back on the live blog ... Lorena Wiebes Binch-Chimay-Binche marshal (GCN+)
05 October 2022, 16:02
Correction: Oooh look at me, my name's Chris Froome and I go on work trips to Israel

Amazing ride out in Israel today on #YomKippur with Guy Sagiv.
No traffic at all to worry about so we took full advantage 😌
G'mar chatima tova! pic.twitter.com/s3gvAlnjRu 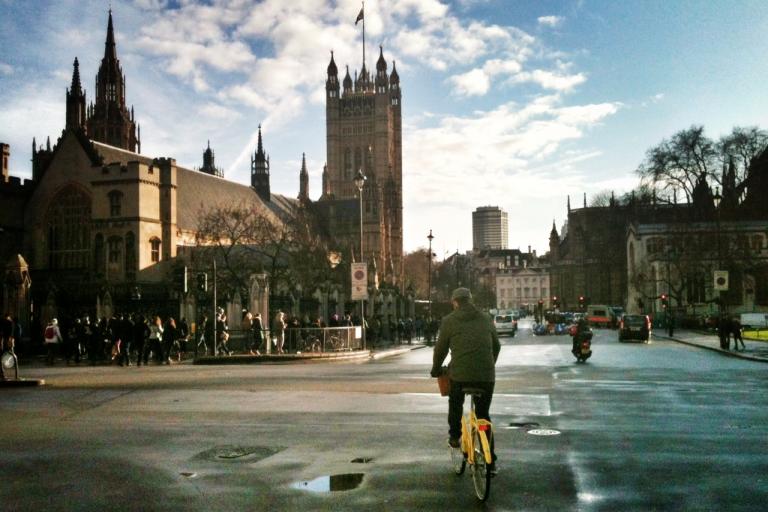 Andrew Gilligan told a fringe event at the Tory conference that he fears Liz Truss could water down the government’s commitment to cycling and walking
43
05 October 2022, 15:39
Uh oh, they're talking about helmets again...

Do we really need another helmet debate on social media?

I'll let you be the judge of that. Feel free to find something less tiresome to read on today's blog...

BUT this one's hardly your usual six-follower, no avatar, provocateur...

Why not both, why limit yourself to a single helpful item. Particularly when one takes months/years and the other a few hours to have delivered.

You know it’s been a long day when your shorts look like this 😅 pic.twitter.com/sxXkXCgNX0

No leg warmers? Sweat marks? Sunshine? You wouldn't get that here in October...

We are pleased to announce the introduction of on-board cameras in races! 🏁 📹

Check out some highlights from this year's racing, thanks to @Monument_HQ.

British Cycling has announced approval for wider use of on-board cameras in sanctioned races, "helping to showcase the thrills and excitement of the sport and enable fans to get closer to the action than ever before".

After a successful trial in this year's National Road Series and National Circuit Series, riders will be able to apply for approval from the governing body prior to an event, filling in this form, at least seven days prior.

"I'm really pleased that we're now able to widen the opportunity for riders and event organisers to capture on-board footage in British Cycling events, helping to showcase the thrills of racing and taking the sport to new audiences," Dani Every, British Cycling's delivery director, said.

"Having successfully trialled the process this summer, and seen the success of on-board cameras in events like the UCI Track Champions League, we're really excited by the potential of their wider use and would encourage any riders or event organisers who are interested to contact our compliance team to find out more."

What do you reckon? Positive news?

I asked for this every year since 2018. After some trials and all that, I’m glad to see @BritishCycling have given the go ahead! https://t.co/SQS0wSudRk

Hope I’m wrong but I don’t think this is the game changer that’s going to stop teams & races going to the wall. The active travel charity has called for “long-term safety barriers” to be removed, after a recent survey found that just 14 percent of parents feel very confident teaching their children to cycle on the road
9
05 October 2022, 13:45
Wahoo Roam V2 first look — Better maps, colours and GPS?

If you missed it yesterday...

Plenty of bezel chat amongst you lot...

Surreyrider was more concerned with the £50 price hike, but back to bezels...zeeridesbikes: "What is going on with that bezel?! I'll stick with my Karoo 2. Battery's life isn't as good (12 hours ish) but at least it works like a smartphone and the navigation is incredible." 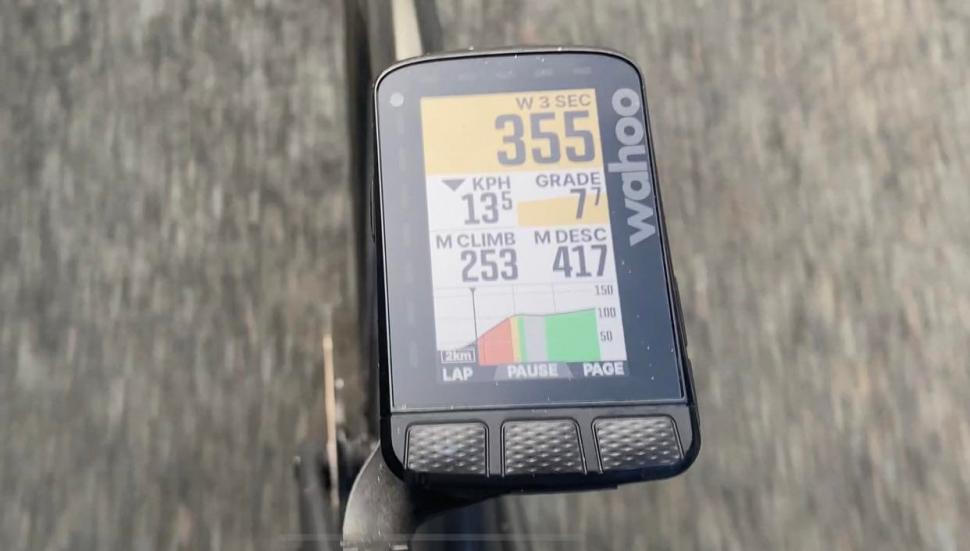 BalladOfStruth joined Liam and Jamie in playing spot the difference: "It's the same as the old one. It looks like the only physical change is the three buttons below the screen have been changed from recessed fiddly buttons under a single piece of rubber (which were a bit of a bitch to press in gloves), to three individual buttons flush with the screen. Otherwise it's literally identical to the old one." 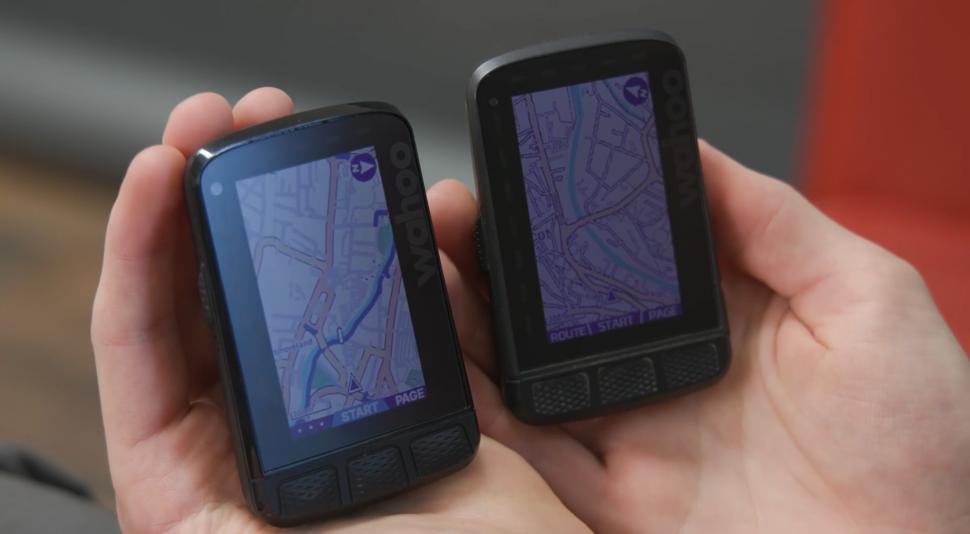 05 October 2022, 13:21
"Some schools have memorial gardens to the children they have lost as a result of poor driver behaviour. Not on my watch": Headteacher takes on parents' bad parking

"Some schools have memorial gardens to the children they have lost as a result of poor driver behaviour.

Not on my watch." https://t.co/TPvbHPjhOk

Now, admittedly — as a few people pointed out here — wouldn't promoting active travel as a school run replacement be an easy option?

Regardless, strong stuff from the headteacher of a school in Dulwich, south London, who is so fed up with parents parking where they want, "endangering the lives of others", that this letter dropped into the inboxes this week...

"For the sake of the children I now ask you to make that change [...] the behaviours of a few are endangering the lives of others [...] some schools have memorial gardens to the children that they lost as a result of poor driver behaviour. Not on my watch."

05 October 2022, 11:40
Flanders or Huddersfield? Check out this savage cobbled climb

Just outside Huddersfield it seems there's a cobbled berg straight out the Tour of Flanders...(not just because of the Strava segement's name)... Get ready for leg-shredding images...

Out for a walk and found this sneaky little cobbled climb about half a mile from home.
One to tackle on the bike one day, when it’s dry!! Not sure what gradient it tops out at but it’s a beauty 😮 pic.twitter.com/pbY8Re7tOm

Or, if you want to read your Recommends... Jack Rawlins, who had a previous caution for attacking a cyclist, chased the man to “teach him a lesson” after clipping him with his wing mirror
52
05 October 2022, 09:47
One vehicle you don't mind seeing in the cycle lane

A motor vehicle I don't mind seeing on the cycle path pic.twitter.com/0ubGKplc8L

A simple tap on the shoulder "podium is this way." Pointing in direction would have been sufficient. Not this uncomfortable showing, repeated touching. https://t.co/gui32loFyk

A few of your comments...

"Yuck. That dude needs to back off, just watched the full replay — she pushes him away several times and he doesn't go. Aside from that, what a finish — metres ahead of second & third, a class of her own. Good to see Le Col Wahoo on the podium too, a smaller British outfit," thisismyusername commented.

peted76 has noticed the problem before: "This isn't a one off problem (I've seen it plenty in all kinds of race) nor (in my opinion) is it a male or female problem. Sometimes, as in this case, it is uncomfortable viewing, just leave the riders alone to gather themselves."

tbh I wasn't really concerned about how uncomfortable the fans were but after watching the video, HE IS WAY TOO HANDSY, I also felt uncomfortable bbllleeeuurrrgghhhhhhhh. Love and respect to Lorena Wiebes, I would have lamped him one. https://t.co/8bY0teqMGa

Always thought this about these weird finish line courtiers.

Who instructs them to do this https://t.co/FTNlfyNMQe

The fans were uncomfortable? Imagine then how she felt.

Here's one of Lorena Wiebes' DSM teammates dropping a like on a Tweet calling the marshal's behaviour "uncomfortable" and asking "how many times does she have to push his hand off her?" 05 October 2022, 08:04
"Keep your hands to yourself, it's not difficult": Fans left uncomfortable as Lorena Wiebes forced to ride away from "hands-on" race marshal

If we were uncomfortable, think how Lorena Wiebes felt...

Binche-Chimay-Binche should have been the story of the Dutch sprinter winning her 23rd race of the season on her final appearance for DSM, and while Ryan gave her deserved props on yesterday's blog, the majority of the post-race chatter was about this less-than-comfortable scene from the finish...

Lorena Wiebes won Binche-Chimay-Binche and then this happened.

There is no reason in this situation that any rider - male or female - should be touched, let alone when they’ve clearly asked not to be.

On commentary, José Been described the man, tasked with escorting the winning rider to the podium, as "a little bit touchy which Wiebes does not appreciate, to be honest".

Wiebes repeatedly pushed the marshal's hands off her back and shoulders before eventually riding off in search of her teammates.

The video of Lorena Wiebes and that way-too-hands-on man is really uncomfortable to watch.

Worse still, I'm sure every woman watching it cringes knowing exactly what it's like to be in Lorena's position.

Just keep your hands to yourself, it's not difficult.

Good finish on the women’s race. @TourDeJose completely correct to point out the inappropriately handsy man trying to steer Wiebes toward the podium. Not acceptable.

Get your hand off her you weirdo https://t.co/TyeBaW6VO2

With full respect to the Belgian one-day race, Binche-Chimay-Binche is not the Tour de France, where the bustle of reporters, photographers and team staff waiting to greet the winner can see a rider swarmed by a sea of attention, getting further and further from stepping on the podium by the second. 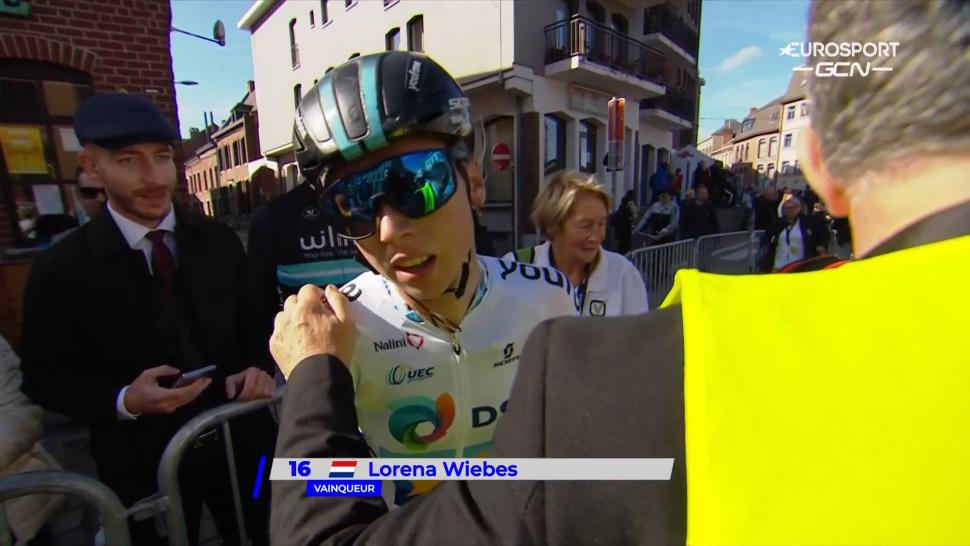 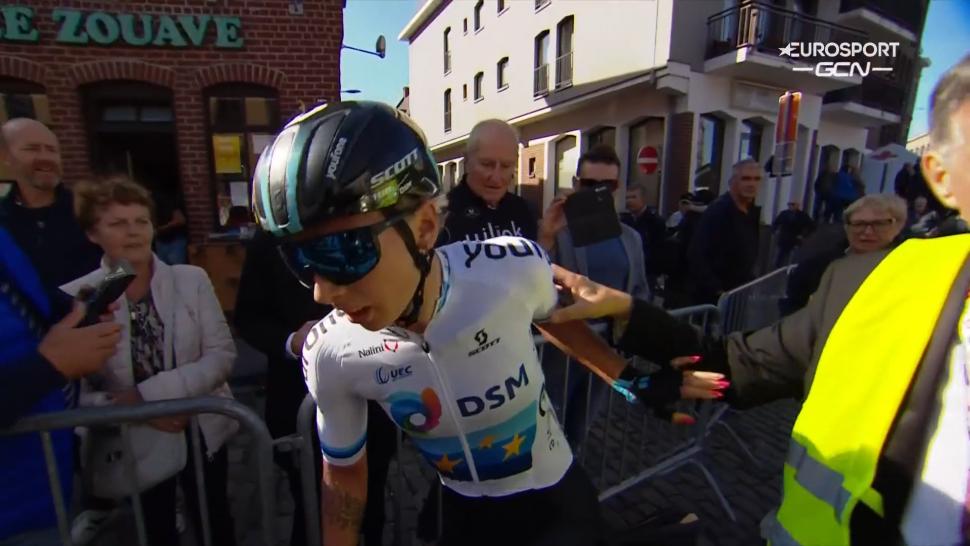 Even there race staff tend to form a human barricade rather than insisting on touching the rider. On a sporting level, when your heart rate is at 190, you can taste blood, legs weak and you're just wondering if you can make it to the podium without throwing up, a hand on the back or someone invading your personal space can be infuriating (not that I'd know what riding to a podium feels like)... 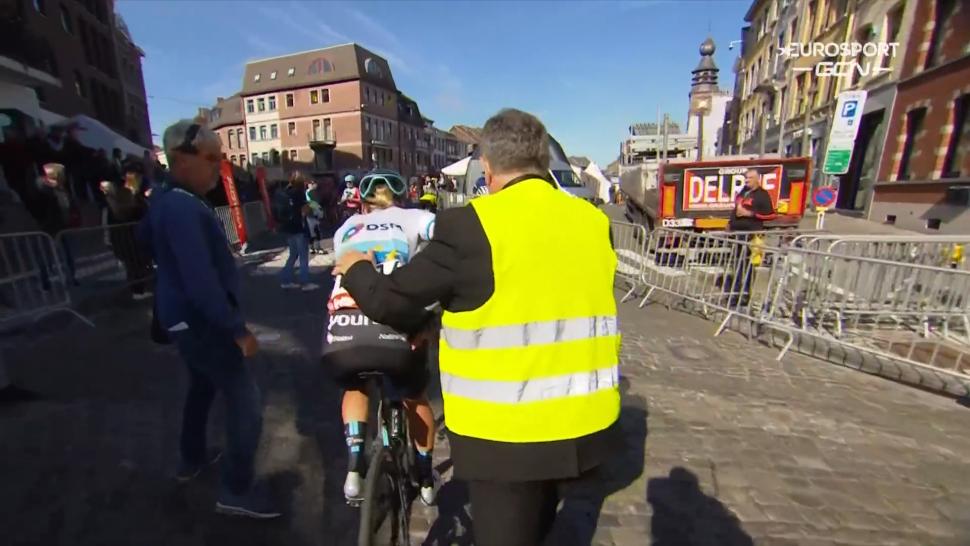 More importantly, on a human level, keep your hands to yourself...(rant over)...