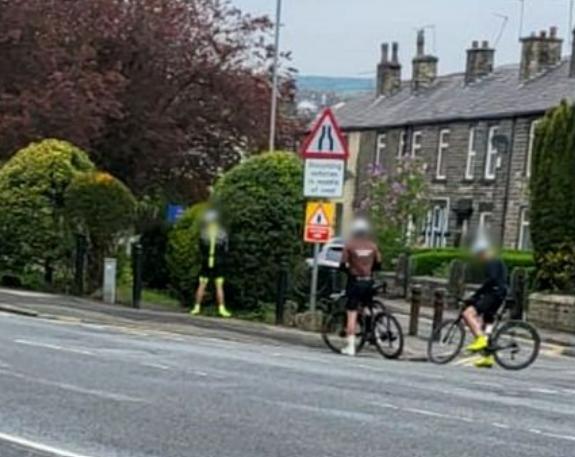 The incident occurred during the annual Tour de Manc sportive, though organisers have confirmed that the rider was not registered for the event
by Ryan Mallon

A cyclist photographed urinating at a war memorial garden in the village of Norden, Rochdale, was not part of the annual Tour de Manc sportive, organisers have confirmed.

The rider, who was standing on the footpath close to the main road while two other cyclists waited on him, was spotted by a passer-by on Sunday morning, at around 11.30am.

At the same time, hundreds of cyclists were passing through the area as part of the Tour de Manc sportive, an annual leisure event featuring four tough rides, the longest of which – the ‘Mad Manc’ – covers 200 kilometres, 10,000 feet of climbing, and all ten of Manchester’s boroughs.

The Tour de Manc’s organisers denied that the offending rider was part of their event and, following an investigation, have managed to identify the culprit and report him to the police.

> Tour of Wessex angers locals with riders peeing in public

Norden resident Elliott Marsland, who photographed the cyclist, described the rider’s actions as “horrific” and “disrespectful”.

“I was walking back through the village… and I noticed loads of cyclists because it was the Tour de Manc that day,” Marsland told the Manchester Evening News.

“As I was walking past the memorial gardens, I saw three guys there, one who was doing something he shouldn’t have been doing. I just thought, how horrific and how disrespectful is that?

“Especially to do it in a village, in daylight, in the middle of the day, is one thing, but in a memorial garden to commemorate the war dead? It’s awful. So I took a photograph and I shouted across to them, but they just ignored me, which angered me a bit.”

Marsland also said that he hopes the actions of gate-crashing riders won’t spoil the event for others in the future.

He continued: “I do a lot of running and you normally have to pay an entry fee for marathons and things like the Tour de Manc, because the entry fee isn't just for admin costs – it goes to charity.

“I saw there were other cyclists, who were just turning in at the junction to go down towards Norden Primary School.

“They had the official numbers on them, so they were registered riders. This man obviously hadn't paid and didn’t have a number, so that’s why he couldn't use the pitstop at the primary school.

“So he has taken it as a freebie and was caught with his pants down, literally. I think this is going to be raised again when the Tour de Manc runs next year.

“There's always a minority who ruins it for the many. This shouldn’t detract from the wonderful 99 percent of participants in the Tour de Manc who have done their jobs and raised their money.”

> Riders banned from New Forest sportives for urinating in public

Peter Winkler, a Conservative Councillor for Norden, said: “I was naturally disappointed that a cyclist, indeed anyone, had been spotted urinating in Norden’s memorial garden, not least because I was hosting a Tour de Manc pit stop just a short distance away that provided toilet facilities.

“Norden is a friendly place and there are several pubs that I am sure would have welcomed a cyclist ‘caught short’.”

The councillor praised the organisers of the Tour de Manc for their swift and decisive handling of the situation, and made it clear that the offending individual's behaviour should not be associated with the event itself.

“Whilst the actions of this person were at best misjudged, it is important that we be clear that he was not a registered participant in the Tour de Manc,” Winkler said.

“The organisers… were as upset as anyone and have been extremely helpful in identifying the rider through event photography and their connections to the cycling community.

“The event is an incredible culmination of the effort and generosity of many people and does an amazing job of raising money for local charities and good causes.

“The riders are always well briefed and extremely grateful for our hospitality, and we are looking forward to welcoming them back again next year.”

One of the event’s co-organisers, Tony Rubins, said that the team behind the Tour de Manc was “upset to hear this had happened. We launched an investigation and found photos of these riders.

“They had no Tour de Manc rider numbers. We reached out to our rider community and the offending rider was identified.

“As we believe an offence may have been committed, we passed on the rider details to the local authorities. We are always delighted to have the support of the Norden Community and we warn our riders to be courteous and obey the law. We look forward to visiting Norden again on 30 April 2023.”

This isn’t the first time that cyclists have been punished for relieving themselves in public during races or leisure rides.

In 2014, the company behind the Wiggle New Forest Spring Sportive banned 18 riders from its events for breaking rules such as urinating by the roadside rather than in the portable toilets provided by the organisers.

The banned riders had been caught urinating outside the Forest Park Hotel in Brockenhurst, while it was also alleged at a meeting of the New Forest National Park Authority that some cyclists had defecated on village greens while taking part in sportive rides.

Earlier in the same year, five junior cyclists were fined for urinating before a race on the Menin Gate in Ypres, one of the best-known memorials to British, Irish and Commonwealth casualties of World War One.

Race organiser Bart Vannieuwenhuyze said that those participating in the junior race, which started at the memorial to mark the centenary of the start of the Great War, had been warned beforehand to respect their surroundings.