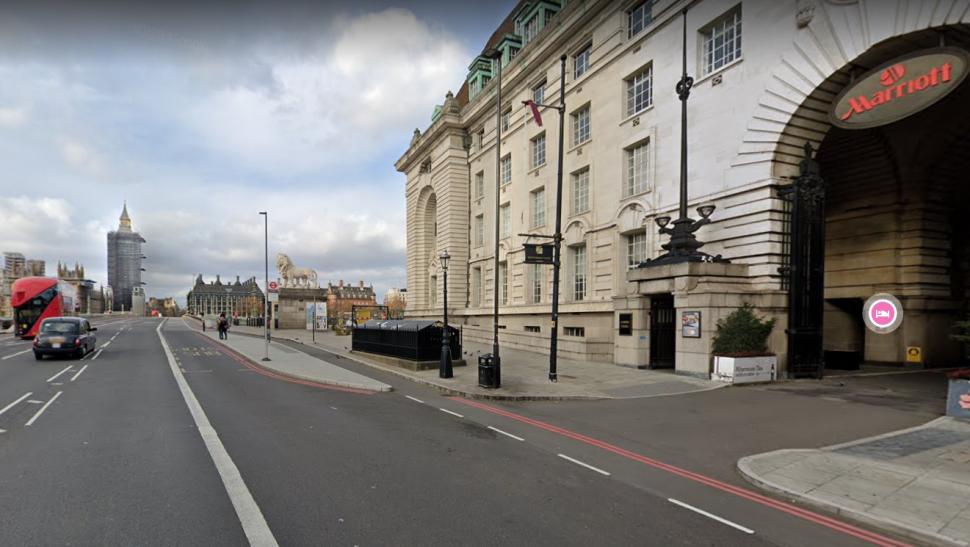 Updated to include comment from Simon Munk of London Cycling Campaign.

A London cyclist has tweeted about how he was left-hooked by a taxi driver as he rode along a protected cycle route on Westminster Bridge, and believes that the design of a floating bus stop is to blame because it does not make motorists who are planning to turn left slow down.

The incident happened yesterday afternoon at 4pm as the rider, Niklas, headed across the bridge towards Waterloo, with the taxi driver turning across his path to enter the Marriott London County Hall Hotel that occupies part of the headquarters of the former Greater London Council, causing him to brake sharply to avoid running straight into the vehicle.

The cab turned left and crossed the bike lane without slowing down or looking, despite the view being blocked by a stopped bus. I shouted, threw on my anchors (pulled my highest "stoppie" ever), and finally managed to swerve the collision into a tackle instead of head-on. pic.twitter.com/U7KE2atUaY

A better designed junction would force the one turning to slow down, giving them better time to look. The angles on this one scream about taking the turn at speed.

On the side of Westminster Bridge that Niklas was riding on, there is a bus lane and a mandatory, painted cycle lane with the floating bus stop just before the hotel providing a section of protected cycleway to the left (the entrance to which is often blocked by pedicab drivers touting for fares, and at times an ice cream van).

The photograph at the top of this article clearly shows how the kerbing at the end of the bus lane side of the island curves towards the hotel – and the left turn can therefore be taken by a driver at a higher speed than if there were more of a right angle to the kerb.

Replying to a commenter on his tweets, Niklas said he may have been safer going straight ahead, rather than using the cycle lane.

A better designed junction would force the one turning to slow down, giving them better time to look. The angles on this one scream about taking the turn at speed.

Niklas told road.cc: “The cabbie did stop, was apologetic and admitted fault. I do of course blame the driver for the awful manoeuvre, but the real culprit is the shit road layout that enables it, plus having the bus stop blocking the view both ways.

“Thankfully I had no bad injuries, as I reacted quick enough to scrub most of my speed and managed to avoid a head-on collision. It would probably have hurt a lot more if I’d contacted the side of the cab with my face, instead of my shoulder and hip.

“There was a third party who also came to ask me whether I was okay, someone with a badge around their neck,” he continued.

“Thinking back, I'm not sure if it was the bus driver (stopped at the bus stop) or just someone who happened to be there.

“I was probably so full of adrenaline I wasn't really thinking straight. I was also meeting some people and wanted to carry on.

“I do remember I did check myself and the bike before I hopped back on the bike and carried on.

“There was no damage to the bike,” he added, “I’m pretty sure the Kona Paddy Wagon could survive the apocalypse.”

The floating bus stops on the Lambeth side of the bridge, and particularly the one on the opposite carriageway, outside St Thomas’ Hospital, encountered strong opposition when plans were first announced, with opponents claiming they would put hospital visitors, including patients and the disabled, at risk from cyclists.

Guy’s and St Thomas’ NHS Trust admitted in 2016 that the “serious concerns” it raised regarding patient safety were merely opinions rather than being based on evidence.

Niklas’  experience shows however that on the County Hall side at least, the design is one that can put cyclists in danger.

“The compromises and weaknesses in the end design have to do with how, despite there apparently being an all-powerful cycling lobby, London’s stakeholders often weaken schemes.

“Despite that, this scheme still is a vital link across the river when most bridges remain far more hostile to cycling, and we’re glad they’re there.

“We urge Niklas to make use of our free legal helpline if he’s a member (other orgs also provide such a service) and if others have had similar experiences at this point, please contact LCC and we’ll try and bring more pressure to bear here on getting improvements.

“As ever, perfect cycle schemes don’t exist, and the ones London gets are often down to the hard graft of staff and borough volunteers at LCC.”