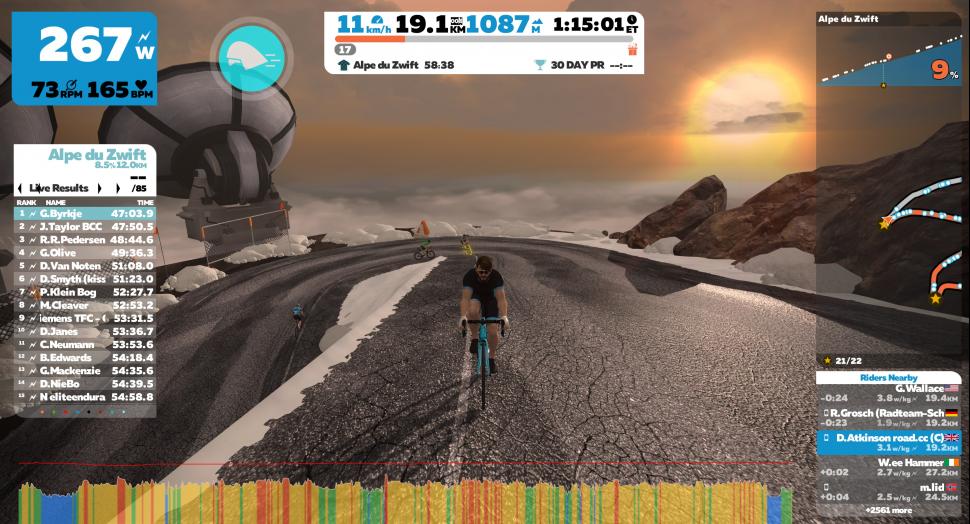 A cyclist from Fife has set out to attempt to ride a virtual Everest every day on Zwift for the next fortnight to raise money for charity – and in the process will become the first person to complete the climbing challenge on consecutive days.

Ross Duncan from Dunfermline is aiming to climb 8,848 metres, the equivalent height of the world’s highest mountain, Mount Everest, reports The Courier.

The 34 year old set out yesterday on the challenge, which will see him climb a total of 124,000 metres over the next two weeks, on the Alpe du Zwift ascent.

His effort aims to raise at least £5,000 for the charities CHAS – Children’s Hospices across Scotland – and the My Name’5 Doddie Foundation, set up to support research into motor neurone disease by former Scotland and British & Irish Lions forward Doddie Weir after he was diagnosed with the condition.

“My latest challenge, to climb Mount Everest every day for 14 days, might seem to some as a bit terrifying, so it’s quite fitting that I’m starting it on Halloween,” Duncan said.

“I’m actually really looking forward to it though, as I’ve always enjoyed challenging myself and proving that even things that seem impossible are possible.

“As an ultra-cyclist I’ve taken on various difficult challenges that have taken me way out of my comfort zone, and there’s no better feeling than completing a challenge that I have set for myself, such as this.”

Duncan’s previous charity challenges include riding 124 kilometres every day for 124 days in a row, which raised £6,000 for CHAS.

“People often ask me how I do it and I always tell them the same thing – it’s about having the desire to do it and from there you just break it up mentally.”

His initial idea was to ride 2,500 miles in 20 days, but he had to change his plans as a result of stricter rules aimed at containing the coronavirus pandemic.

Fiona Leslie, senior community fundraiser at CHAS, said: “Ross has raised so much for CHAS already and we are so grateful to him for again taking on another Herculean challenge which will make such a difference to the lives of the many children and families we support who need our help now, more than ever.”

On his fundraising page on Virgin Money Giving, Duncan said: “The challenge is based on the124 number I used for a previous challenge that I did for CHAS at the end of 2018.

“I will be using a Tacx Neo 2T and have my back up Tacx Neo smart trainers for this challenge,” he continued.