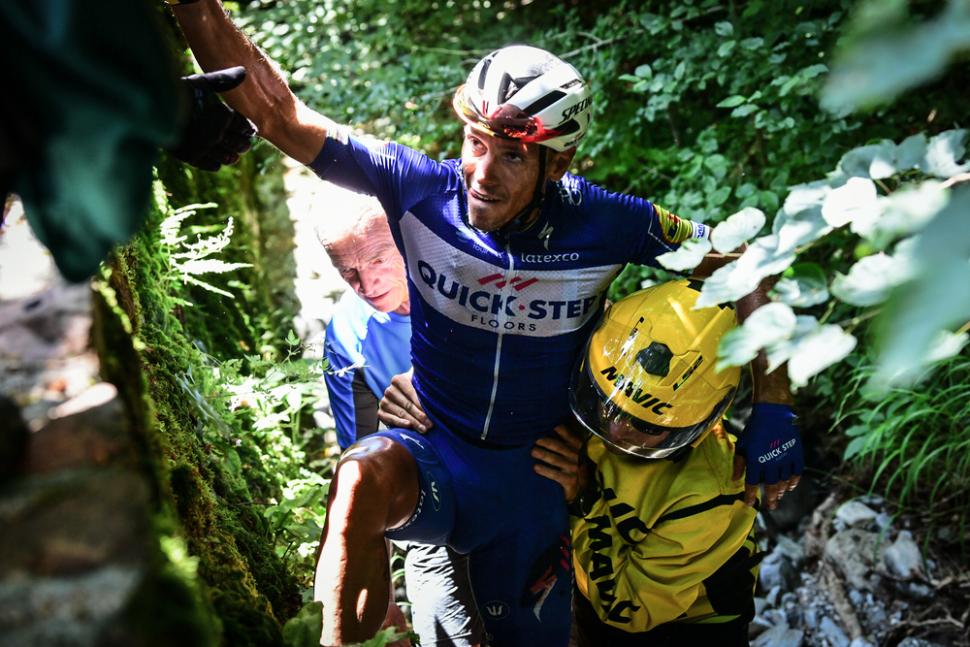 Imagine ​this scenario. You’re zooming down a descent after watching a Tour de France mountain stage, possibly imagining yourself emulating your heroes, when you overcook a bend and end up in a ravine below – and get rescued by two of the biggest names in the sport, four-time Tour de France champion Chris Froome, and former world champion and five-time Monument winner, Philippe Gilbert.

> Is Chris Froome still unhappy with his disc brakes?

That’s exactly what happened after yesterday’s Stage 17 of the race when a cyclist crashed as he rode back down the Col du Portet following overall leader Tadej Pogacar’s stage win that tightened his grip on the yellow jersey.

It was Gilbert himself who revealed what had happened, with the incident happening just 24 hours after the race had revisited the descent of the Col de Portet d’Aspet where he himself had crashed over a parapet while leading Stage 16 of the 2016 edition of the race – the picture above shows him being helped back onto the road.

In an interview with the Francophone Belgian TV channel RTBF, the Lotto-Soudal rider, who finished the stage more than half an hour after the winner, said: “On the Col du Portet, I was hugely encouraged, and I thank the fans for that, it’s heartwarming.

“The three of us – I was with Rick Zabel and Marco Haller – really benefited from the atmosphere.

“I can tell you that lots of things happen on a climb! On the descent, coming back down from the finish, I was following a cyclo-tourist who overshot a bend and ended up 20 metres further down.

“I stopped to help him with Chris Froome and Christopher Juul-Jensen,” he continued.

“There are things that aren’t known by the media, but yesterday I took almost 20 minutes to help this man!”

He added: “We called for help because he was still badly messed up. These are experiences that we also live through.”

We’re unable to find any update on the cyclist’s condition, but we wish him well.