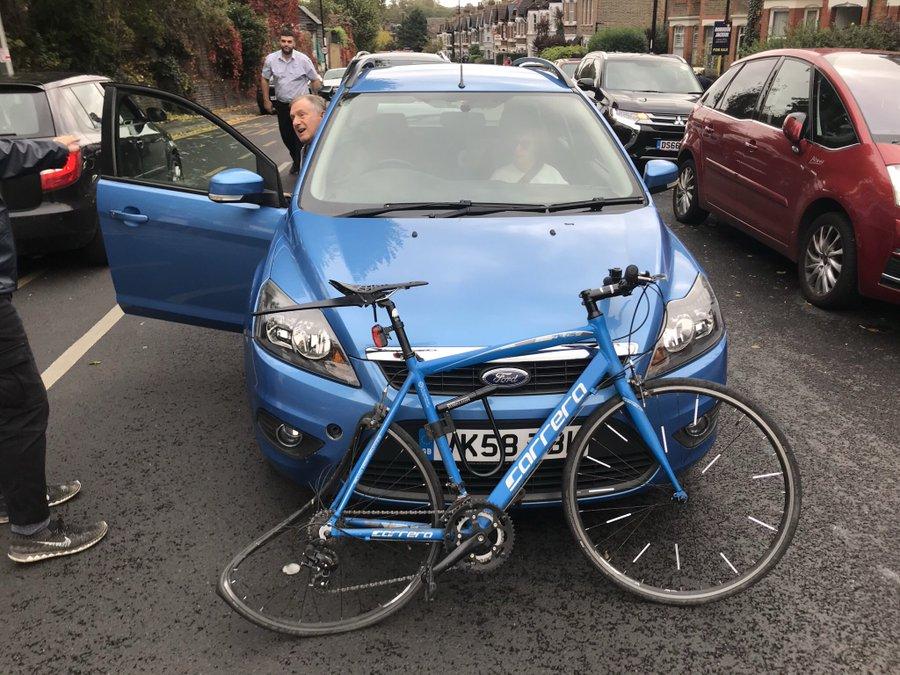 Paul Crompton's bike after Derek Pipe rear-ended him (via Twitter)

Nick Freeman, the lawyer nicknamed ‘Mr Loophole’ for obtaining not guilty verdicts for celebrities charged with motoring offences, has secured the acquittal of a London cyclist who had been accused of causing a crash.

Paul Crompton, aged 54, appeared at Bexley Magistrates’ Court yesterday charged with riding his bike “without due care and attention” following an incident in Lewisham on 24 October 2020, reports the News Shopper.

Oct 2020 I was rammed from behind by a motorist as I was cycling. Unbelievably, @CPSUK decided to take me to court for “cycling without due care and attention”. Today I was given a NOT GUILTY verdict. I was represented by @TheMrLoophole who made sure justice was done. pic.twitter.com/QV3HIN5NVI

The prosecution had claimed that Mr Crompton – a television producer whose credits include the Channel 4 show Escape to the Chateau – had braked suddenly in front of 74-year-old driver Derek Pipe, causing him to crash into the back of his bike.

Mr Crompton, who sustained soft tissue damage in the incident on Ladywell Road, described the charge against him as “insane” and told the court that he had feared being “sandwiched in” between Mr Pipe’s Ford Focus and a row of parked cars and that he knocked on the driver’s window to try and make him aware of his presence.

“I wanted to warn him that he'd done a dangerous manoeuvre and I would hope that a warning would mean he would think about it next time,” he explained.

“I knocked on his window and shouted, ‘Didn't you see me?’ very loudly.”

He said he then rode in front of the car, but was “catapulted” over his handlebars after the driver crashed into the back of his bike, destroying the rear wheel.

Mr Pipe had claimed that Mr Crompton had clipped his wing mirror and hurled abuse at him during the incident, and that he had then stopped twice in front of his car and given him no time to avoid the crash.

He told the court: “The cyclist came up the outside of me and then put his bike across the front of my car towards the windscreen and started hurling abuse, shouting, going off in a very intimidating, aggressive manner.

“I was just proceeding safely behind him then all of a sudden he stopped again a second time,” said the motorist, who claimed he was driving at five miles per hour when he struck Mr Crompton.

“The distance we both travelled was so short it was impossible for me to hit the brake in time,” he added.

Mr Freeman, who described Mr Pipe’s version of events as “littered with confusion,” said that even if the cyclist had come to a halt suddenly, Mr Crompton had not allowed adequate braking distance between his vehicle and the rider.

He said the claim that his client meant to cause the collision was “ludicrous,” bringing about “this rather unique and bizarre situation Mr Crompton finds himself in accused of riding without due care and attention.”

“The prosecution has not proven the case so that we are sure beyond reasonable doubt. We therefore find Mr Crompton not guilty.”

Following the verdict, Mr Crompton said that he was “utterly, utterly relieved.”

He added: “Although it sounds farcical you still question which way they will go because it's one person's word against another.”

Mr Freeman, whose past clients include Sir Alex Ferguson, David Beckham and Jeremy Clarkson, said: “The whole case has been bizarre,” and described it as “a complete waste of people's time, trouble and money.

Happy to report a successful outcome for my client #cycling https://t.co/TFOUKQxa1I

“This has taken up three hours of time,” he continued. “It’s cost the taxpayer probably thousands of pounds.

“Mr Crompton will now be commencing civil proceedings against Mr Pipe,” he added.

Last month, the Government responded to a petition posted by Mr Freeman last June on the Parliament.uk website in which he called for cyclists to be registered and wear visible ID, be subject to penalty points if they commit offences and be forced to ride in cycle lanes where applicable.

In response, the Department for Transport said: “The Government has no plans to introduce any such requirements for cyclists. The current trials of rental e-scooters will inform future policy on them.

“The Government considers that the costs of a formal registration system for cycle ownership would outweigh the benefits. The safety case for such a system is not as strong as that for drivers since, by contrast with motorised vehicles, cycles involved in collisions on the highway are highly unlikely to cause serious injury to other road users.”