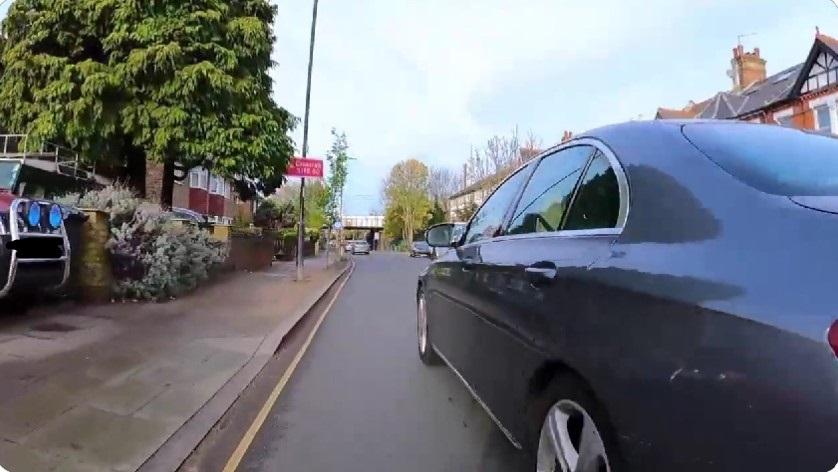 The cyclist says this is the worst close pass he has ever received on a stretch of road in Hanwell, London that he claims is already a "hot spot" for poor driving standards...
by Jack Sexty

Just weeks after a video of a driver failing to stop to let a five-year-old cyclist and his father pass went hugely viral, another cyclist, this time carrying his infant child in a child seat - has shared footage of a driver passing them with inches to spare on a narrow London street.

The cyclist, Ruairi, can be heard saying "f**king idiot" as the driver of the Mercedes overtakes on Church Road in Hanwell, West London, 20 seconds into the clip. Other vehicles are travelling in the opposite direction as the driver makes the dangerous manoeuvre, with parked cars making the available road space even narrower.

Ruairi told road.cc: "My son and I were on our way back from his Saturday football training. It's a short 7km ride from Hanwell to Gunnersbury Park, Ealing, London. We travel by bicycle if dry, which has been pretty regularly this year.

"The bike is a Merida Silex 400, with a Yepp Maxi seat... a really good seat and solid attachment post.

"[There is] no real cycling infrastructure apart from bus lanes on the main roads along the route. Although Church Road is a main road, it has no cycling provisions other than bicycle paint marks.

"As you can see in the footage, we are cycling when a Mercedes performs a very close pass.

"This part of the journey is a hot spot unfortunately, but this is the worst close pass yet."

Ruairi says he has reported the incident to the police.