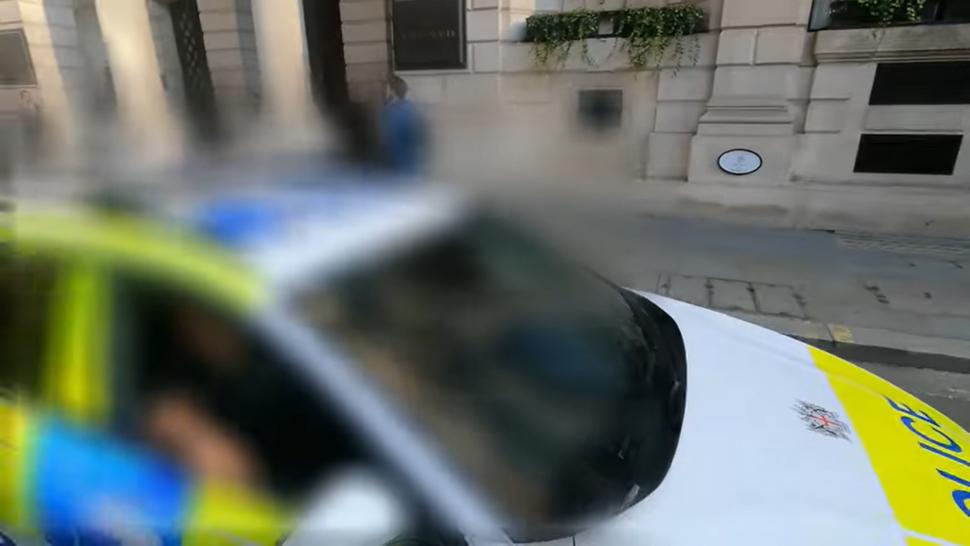 City of London police officer tells cyclist he shouldn't ride in the "middle of the road" (credit: Velodrone/YouTube)

"Check the Highway Code": Police officer claims cyclist shouldn't ride "in the middle of the road"

City of London Police officer told the cyclist "you shouldn't be cycling along in the middle of the road [...] there's a cycle lane [...] I know the Highway Code"...
by Dan Alexander

Over the weekend we reported how Greater Manchester Police apologised and promised all officers would be made aware of Highway Code rules after a video surfaced showing a "shocking level of ignorance" from one officer who told a cyclist he had to ride single file next to the kerb.

Well, the video prompted another reader to send us their recent frustrating police encounter, this time with an officer from the City of London force who told him he should not be riding in the "middle of the road".

The reader said it was a "disappointing interaction", but stressed the only aim of sharing the footage is to highlight the "scale of the challenge that cyclists face in public understanding of what is not only perfectly normal and legal cycling, but what is in fact recommended in the Highway Code as good practice and to be safe on the roads."

"I'm not in any kind of righteous steaming fury here — this is just someone who thinks they know the Highway Code but doesn't, it isn't the end of times," he said.

"I've blurred their face because it's not really important who the individual is, and because we all make errors in our jobs that we wouldn't necessarily want to define us."

In response to questions about if he had reported the incident to City of London Police, the reader told us: "I'm really not interested in doing that, or singling out an individual here for what I would perceive to be an institutional gap.

"I'm far more interested in knowing what, if any, systems the police force has in place for ensuring officers who go out on the road are aware of and promote public understanding of the very valuable guidance in the recently clarified Highway Code.

"If anything is going to change in public attitudes on the road, the police forces really have to lead the way and be positive champions for the hierarchy of road users."

What does the Highway Code say?

Rule 61 of the Highway Code:

Use facilities such as cycle lanes and tracks, advanced stop lines and toucan crossings where they make your journey safer and easier. This will depend on your experience and skills and the situation at the time. While such facilities are provided for reasons of safety, cyclists may exercise their judgement and are not obliged to use them.

Pointing out the danger of crossing the junction by bike, the road.cc reader explained there was "almost no motor traffic on the road, and certainly none preventing me from reaching the advance stop box — so using it would not make my journey any easier or safer." He continued: "On the contrary, with pavements busy with pedestrians who may step out at any point, several traffic islands on the approach to the junction — and at one point a pedestrian walking down the middle of the road towards me — the safest position is absolutely to be centre of the lane."

"You shouldn't be cycling in the middle of the road"

Contrary to what the officer said, Rule 213 of the Highway Code is as follows:

On narrow sections of road, on quiet roads or streets, at road junctions and in slower-moving traffic, cyclists may sometimes ride in the centre of the lane, rather than towards the side of the road. It can be safer for groups of cyclists to ride two abreast in these situations. Allow them to do so for their own safety, to ensure they can see and be seen.

Ride in the centre of your lane, to make yourself as clearly visible as possible [...] at the approach to junctions or road narrowings where it would be unsafe for drivers to overtake you.

"I was on the approach to a large and complex junction with a dual set of traffic lights on the approach," the cyclist explained. "There is considerable risk to cyclists from motor vehicles wanting to turn off to one of the side roads while they go straight ahead or to an opposing turn off.

"There is almost no conceivable situation in which it would be more appropriate to be in the centre of the lane on the approach and in the advance stop box for when the light goes green.

"Unfortunately this officer, rather than knowing or recognising any of this, is determined that he 'knows' that the Highway Code says 'I should be in the bike lane'.

> Why don't cyclists stick to the left of the lane?

"This is a common misconception by the general public, and one which contributes often to cyclists receiving verbal abuse and even 'punishment passes' or other deliberately dangerous road behaviour when they are in fact acting entirely in keeping with Highway Code recommendations for their own safety.

"I'll be the first to admit that some of the recommendations are counter-intuitive. Believe me, they are counter-intuitive to many cyclists too — but they are thoroughly researched and proven to be the best way to stay safe, especially at and on the approach to large and complex junctions with a history of cyclist fatalities.

"The police should absolutely be at the forefront of communicating and demonstrating to the public that they understand this — and, dare I say, not confusing lines from tabloid agitators with what the Highway Code actually says."

road.cc contacted City of London Police for comment and to raise the cyclist's wish for wider education on the Highway Code within the police force, but did not get a response at the time of publishing this story.