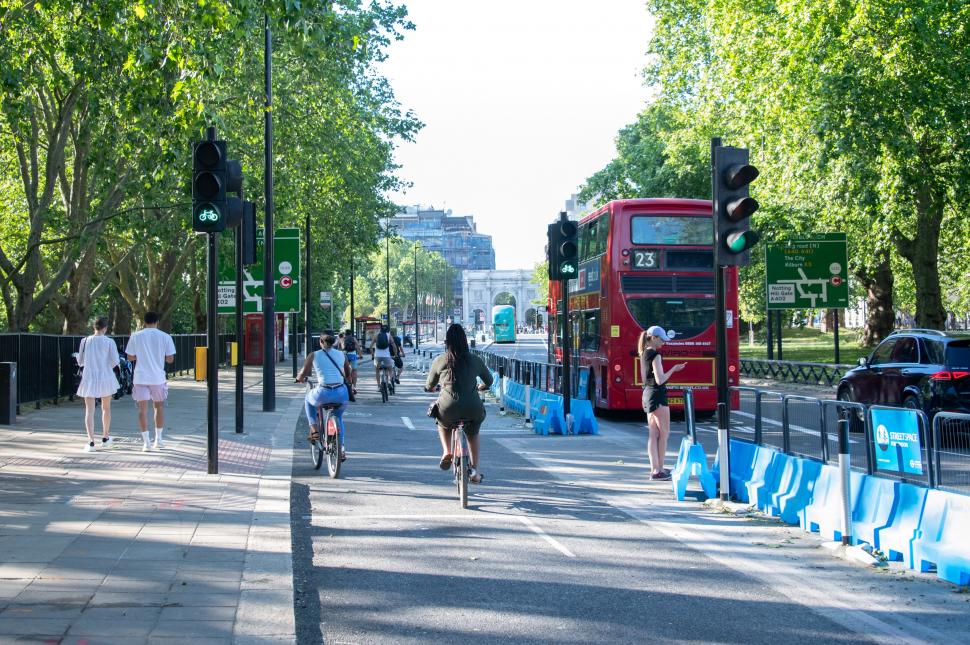 London: £22m for emergency cycling and walking schemes so far

Transport for London (TfL) has allocated £22.26m to 24 London boroughs for emergency interventions like strategic cycle routes, school streets, low traffic neighbourhoods and pedestrian space in town centres – half of the total money it has to spend on its active travel COVID-19 response.

Road.cc has early sight of the breakdown of funding from central Government, that some of London’s 32 boroughs may not yet be aware they were awarded. The money is intended to help Londoners avoid public transport by walking and cycling more during the COVID crisis, while preventing a resurgence of private motor vehicles across the city.

The bulk of the money, £12.64m, is allocated to strategic cycle routes, with £4.29m for low traffic neighbourhoods, £3.56m for space in town centres - things like widening pavements - and £1.75m for school streets.

Although the remainder of the funding will be allocated in the next three weeks there are some surprises in the list of boroughs awarded large sums. The London Cycling Campaign says while the volume and pace of funding is positive, the funding model appears opaque, and warns some boroughs without prior form on delivering cycling infrastructure, will need “watching like hawks” to ensure they deliver.

We've now approved 3 rounds of funding for my #SteetspaceLDN plan to keep our roads free from congestion, supporting 508 projects worth £22m across 24 boroughs:

TfL told road.cc: “Each of the projects is being assessed on its own merits rather than specifics of the boroughs they are in.

“This is about half of our funding,” a spokesperson said, adding they are three weeks into the six-week process, and this is funding from weeks one to three. Funding is being allocated in weekly tranches.

"We are checking in with each borough weekly, as the pace of delivery is going to be so fast, so that if there are any delays we can switch the money to other projects," the spokesperson said.

According to TfL it chooses schemes based on criteria such as deliverability, location, value for money, and unmet demand for cycling and walking based on its Strategic Cycling Analysis – as well as locations where public transport trips can be switched to cycling and walking. Many of these criteria are set out in its Streetspace guidance for emergency infrastructure.

The London Cycling Campaign’s (LCC) Simon Munk said the list raises questions for the LCC, including why certain borough schemes were chosen over others, and whether the various schemes knit together into a cohesive cycle network. Tower Hamlets and Lewisham, who implemented emergency schemes before funding was available, have come out with some of the least funding so far, at just £40,020 and £20,683 respectively.

Munk called the number of low traffic schemes being funded across London “incredible”, but adds the devil will be in the detail.

He said: “I have seen one borough where they have filtered one road and called it a low traffic neighbourhood scheme. Other boroughs like Lambeth have a really clear sense of what I would call a low traffic neighbourhood, and they are piling them in at a rate of knots. Has TfL and [London’s Cycling and Walking Commissioner] Will Norman done the due diligence on what these schemes are? I’m hoping so but there’s a huge difference between boroughs in what they consider a cycle scheme to be.

“Westminster painted cycle lanes in the door zone and are calling that cycle infrastructure, it’s against DfT (Department for Transport) guidance, it’s against Streetspace guidance, is that still getting funding?”

Westminster City Council has not been awarded any funding from TfL so far, according to the list seen by road.cc.

Looks like no protection, just paint, and runs on the traffic side / door zone of parked cars.

How will this work for new cyclists?!

Munk adds “When DfT says it’s giving money to a borough what is the quality process?

“It’s slightly opaque and the pace with which we are moving and the level of schemes being funded, that’s all very exciting. We are hoping TfL has a really good sense of what’s an appropriate level of provision, but we can’t see that from this. We also hope TfL and DfT are working together properly and there isn’t a sense of whether that’s happening.”

Here is a google sheets list of boroughs with funding, and how much money they have been allocated for what so far https://t.co/7WXSJRh6i3

A TfL spokesperson said: “Walking and cycling will be central to London’s recovery from coronavirus and we’re determined to ensure that people living in every borough have access to high-quality infrastructure. It’s more important now than ever before that walking and cycling is made safer, easier and more appealing right across the capital. Each application for funding is being carefully assessed on its own merits and money will only be awarded for schemes which meet the principles laid out in the guidance we have issued to boroughs and published on our website.”

This article was updated on 19 June with a TfL response regarding weekly progress check-ins with boroughs - and with TfL's final statement.