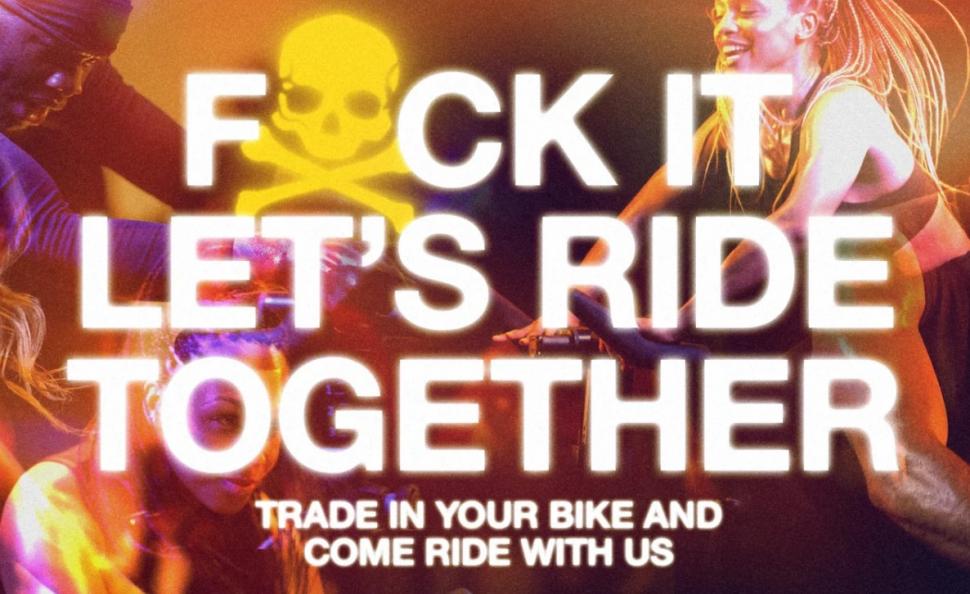 Spin studio brand SoulCycle is trolling Peloton by offering users of the at-home fitness brand free classes – provided they trade in their bikes.

After the pandemic hit key markets including the US and UK, Peloton thrived as gyms and fitness studios were forced to close and lockdown led people to exercise at home.

Since then, however, its sales and share price have plummeted due to a number of factors including greater competition in the connected fitness market and a fall away in demand as gyms reopened that has left it with excess stock of its bikes.

Downturn in sales also forced it to scrap plans to manufacture its bikes and treadmills in the US, with all prodiuction now offshored to a long-standing partner in Taiwan.

In its new SoulCycle Reunited campaign, the spin studio chain emphasises the group riding rather than solo session aspect of its classes – accompanied by an Instagram post declaring “F*ck It, Let’s Ride Together.”

On its campaign page, SoulCycle says: “We’re dead set on seeing you back with your pack, so we’re giving you the opportunity to trade in your bike for the equivalent value of in-studio classes at SoulCycle. That’s a package of 47 classes added directly to your account.

“We’ll pick up your bike so you can get back to the joy of riding with your pack.”

The offer is open to “the first 100 people who sign up to trade in their Peloton bikes,” and SoulCycle says that “all participants must reside within the contiguous United States.”

Other conditions include that they must be over 18, live within 20 minutes of a SoulCycle studio, be a first-time SoulCycle user or not have attended a class since 16 March 2020, and be the owner of a Peloton Bike or Peloton Bike Plus.

Outside of North America, SoulCycle has two studios in London – one in Soho, the other in Notting Hill, although given that stipulation of residence in the lower 48 states, ie excluding Alaska and Hawaii, Peloton users here who might be tempted by the offer will be unable to avail themselves of it.