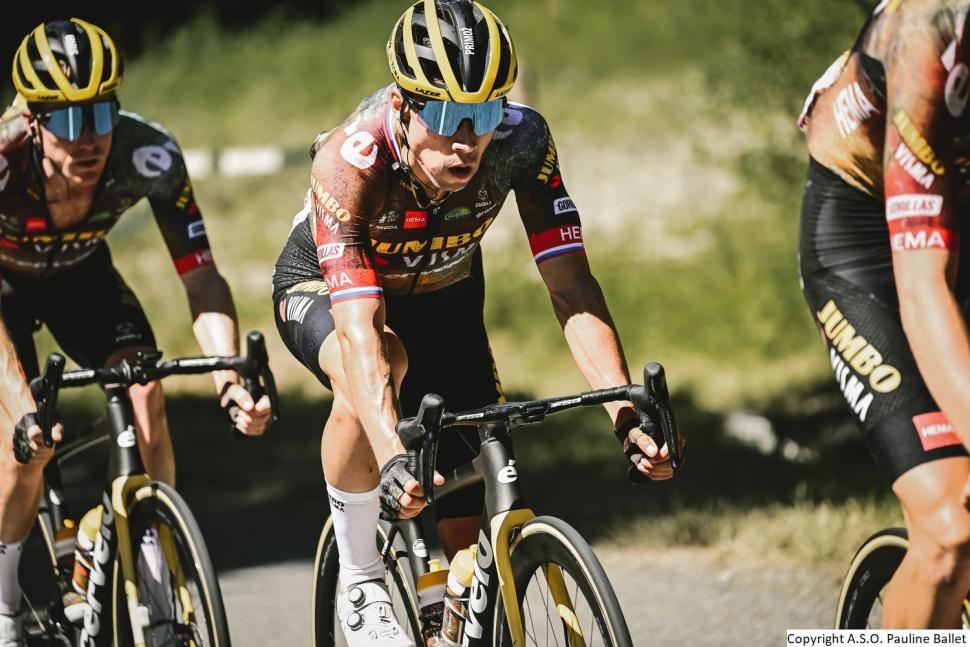 Team Jumbo Visma’s Primož Roglič has not started today’s Stage 15 of the race due to the continuing impact of an injury he picked up after crashing during the opening week of the race. Meanwhile organisers of the Tour de France have invoked the UCI’s Extreme Weather Protocol ahead of the 202.5km stage from Rodez to Carcassonne, with temperatures forecast to hit 40 degrees in Occitanie this afternoon.

Introduced in 2016, the Extreme Weather Protocol, contained in UCI regulation 2.2.029 bis, requires that when extreme conditions are forecast, the organisers and chief medical officer of the race as well as representatives of teams and riders, hold a meeting to determine what measures should be adopted.

Specific measures that will apply today are:

Riders will be allowed to take on foot and drink from the very start of racing at kilometre zero, which marks the end of the neutral zone, until 10km from the finish

They will be allowed to toss their bidons towards fans instead of only being allowed to dispose of them in dedicated zones, and

The time limit today will be calculated at the time of the stage winner plus 20 per cent.

In some cases, invocation of the Extreme Weather Protocol can result in races or individual stages being cancelled altogether, or re-routed or shortened, as happened in last year’s Giro d’Italia when the length of the Queen Stage in the Dolomites was reduced from 212km to 153km and the Passo Fedaia and Passo Pordoi climbs skipped after forecasts of heavy rain and snow.

Besides the Extreme Weather Protocol itself, fire fighters will also be using thousands of litres of water to cool down the roads the race passes along, with predictions that today could see the record surface temperature ever recorded at the race beaten.

André Bancalà, who is in charge of route logistics and safety at the Tour, told AFP on Friday: “During a heatwave, such as the one we are expecting of over 38 degrees, the road temperature gets much higher than that, around 60 degrees.

“The absolute record for heat was in 2010 with a road temperature of 63 degrees when Sylvain Chavanel won in the Jura.

“But this weekend we may even break that, so we are mobilising between us and the fire brigade, to combat that.

“In certain places, the asphalt is going to start melting, not everywhere of course, but it is going to get much softer. So you can imagine how that might end?

“The solution will be to pour water on it.  We will have vehicles with 10,000 litres of water taken along the way, the regional departments are going to help us to cool the roads.”

Bancalà explained that timing was crucial. “You have to do it at just the right moment, if you do it too early it just heats up again,” he said.

“If you do it too late the peloton rides onto wet surfaces. It has to be around 15 minutes before they get there.

“Think about it. If the road surface is 55 or 60 degrees, and the pedal is only 20cm above that, then the rider is subject to exposure to extreme temperatures.”

One rider who will not have to endure the heat today is Roglič who has withdrawn due to the continuing effects of his crash on the cobbled Stage 5 of the race.

The Slovenian needed to pop his shoulder back in after the crash, which was apparently caused by a TV motorbike knocking a hay bale out of position, which Roglič then hit.

Primoz about his #DNS in stage 15 @LeTour

“I’m proud of my contribution to the current standings and I trust that the team will realise our yellow and green ambitions. Thanks to everybody for your great support.” pic.twitter.com/aw0juGFWwO

Runner-up in Paris in 2020 to his compatriot Tadej Pogačar of UAE Team Emirates, Roglič was well out of contention for the overall, lying more than 33 minutes off the race lead – with the yellow jersey currently held by his Jumbo-Visma team-mate Jonas Vingegaard.

The Dane had a lead of 2 minutes 22 seconds over Pogačar ahead of today’s stage, and following tomorrow’s rest day in Carcassonne, the Tour heads into the Pyrenees, where we will find out whether the absence of support from Roglič may harm Vingegaard’s defence of his overall lead.