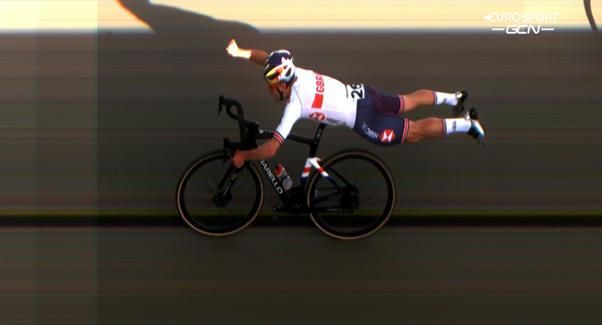 A flying Tom Pidcock capped off a remarkable weekend for British cycling by becoming the first rider from the UK to win the elite men’s event at the world cyclocross championships.

The former junior and U23 world champion added the senior rainbow jersey to his growing collection, attacking halfway through the race to solo to a confident, dominant victory in Fayetteville, Arkansas.

After a rapid start by Dutchman Lars van der Haar, the Belgian team tried to take advantage of the tactical character of the fast and dry course, firing Toon Aerts ahead early in the first lap, though this was quickly chased down by Pidcock, who himself quickly recovered from a relatively slow start.

The British rider then made a ferocious effort during the second lap, breaking up the sizeable front group until only the Belgians Michael Vanthourenhout and Eli Iserbyt could follow.

However, the fast and wide circuit in Fayetteville has lent itself this weekend to cautious, tactical racing, and by the start of the third lap a group of 10 had reorganised at the front.

A flurry of attacks followed, first by France’s Clement Venturini (usually seen sprinting on the road for AG2R) and then Belgium’s Laurens Sweeck and Vanthourenhout, which forced Pidcock to chase, though the multi-talented Brit looked comfortable following these moves.

The race then turned on its head in a matter of seconds – Pidcock dive-bombed Vanthourenhout on a tight and sharp section on the fourth lap, with the British rider’s long-time rival Iserbyt clipping out on the same corner.

Pidcock duly took advantage of his rival’s misfortune, putting the hammer down and forcing an isolated Iserbyt to chase on his own, effectively and single-handedly destroying the Belgian team's tactical advantage.

The Olympic mountain bike champion opened up a 20 second gap on the fifth lap, though the chase behind was aided by a regrouping which occurred thanks to a concerted effort by Venturini to bring Iserbyt back.

However, despite Belgium having three riders in the five-strong chasing group, the pursuit behind Pidcock slowly began to resemble the disorganisation traditionally found at the end of a road classic, with the Brit's lead extending to half a minute.

A strong move on the climb by Van der Haar finally broke things up with two laps to go, dropping the feisty-looking Venturini and leaving the remaining podium places to be fought out between the Dutchman and Iserbyt, with Van der Haar convincingly winning the sprint for silver.

But there was no stopping Pidcock, who maintained his composure at the front of the race (with a bit of showboating thrown in on the final lap for good measure) to take an assured, historic, and thoroughly deserved win.

“That was always going to be super hard race,” Pidcock said after his win. “The drier it became the more tactics would play a part.

“The Belgians were trying to ride a tactical race, but I was having none of it! I found my opportunity and made it stick.

“With Wout [van Aert] and Mathieu [van der Poel] not being here, I think it almost became harder to win the race, because everyone expects that the race is going to be easier now. But you can’t go into the race with that mentality – it’s a super hard race no matter who’s in the race.

“We came here with a plan and a process, and we just stuck to the process, and it turned out good in the end. Coming to America, a week in a hotel, the stress builds up – it’s a difficult one to manage.”

Pidcock's historic win caps off a hugely impressive weekend for the British team in Fayetteville. Zoe Bäckstedt put on a dominant performance to take the junior title, with her teammate Ella Maclean-Howell behind in fourth.

Harriet Harden and Cameron Mason battled to tenth and fifth in the U23 women’s and men’s events respectively, while Nathan Smith sprinted for the victory in the junior race but had to settle for bronze behind Switzerland’s Jan Christen.