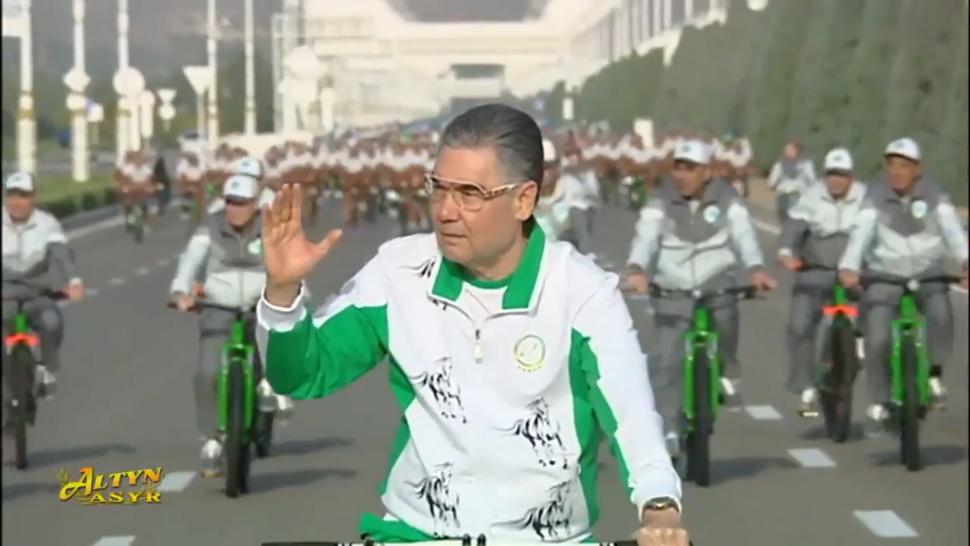 The resolution tabled by Turkmenistan's authoritarian government calls for the "integration of bicycles" worldwide to increase road safety and reduce emissions...
by Jack Sexty

The 193 members of the UN have this week unanimously adopted a resolution that officially states the bicycle is a vital tool to combat climate change, calling on member states to “integrate the bicycle into public transportation, in urban and rural settings in developing and developed countries.” While the news was welcomed by active travel campaigners, it was perhaps less comfortable to find out the resolution was proposed by Turkmenistan, whose cycling-obsessed outgoing president ran a totalitarian regime set to continue under his son.

As noted in a press release detailing events from the most recent UN General Assembly meeting, Turkmenistan's representative noted that "...the bicycle has been a major mode of transportation for 140 years and offers health benefits, convenience and accessibility for millions of people, as well as supporting the reduction of greenhouse gas emissions."

The representative also noted that cycling is still seen as a sport rather than a viable mode of transport in many parts of the world, something that they said must change.

The non-binding resolution calls on member states to "give special attention to cycling in cross-cutting development strategies, including bicycle sharing services," with a particular emphasis on bike sharing as a way to cut greenhouse gas emissions in urban environments.

The European Cyclists' Federation said that although the resolution is non-binding, "it is an important step towards the recognition of cycling as an important mode of transport and a positive step forward from the COP26 Transport Declaration Glasgow in November 2021."

Turkmenistan's president loves cycling ("velosport"), he bloody loves it. Here he is walking around a giant monument erected to cycling as a song about cycling is performed in the background pic.twitter.com/3EjmaZgJz7

Turkmenistan's outgoing president Gurbanguly Berdimuhamedov has long been known as a huge fan of cycling for transportation and as a sport, decreeing a whole month of cycling for his country back in 2013 and holding huge processions annually to coincide with World Bicycle Day.

64-year-old Berdimuhamedov, who has been president of the landlocked Central Asian nation since 2007, has technically relinquished power to his son Serdar today, following an election last month where, perhaps unsurprisingly, he won with a landslide 72.97% of the vote. It's thought Gurbanguly will still be heavily involved in the running of Turkmenistan.

Although Berdimuhamedov Sr aimed to be less totalitarian than his predecessor Saparmurat Niyazov when taking office - such as only making citizens say a sacred oath that states their tongue will shrivel if they speak ill of the president "on special occasions" rather than several times a day - Turkmenistan is still near the bottom of numerous human rights rankings. This meant the UCI's decision to award Berdimuhamedov its highest distinction in June 2020 faced some backlash; however the UCI defended this, saying that the president shown “a particular commitment to cycling.”

Awarding Turkmenistan the 2021 UCI Track World Championships did appear to be a step too far for the UCI though, as Berdimuhamedov was told on World Bicycle Day of all days that his country would no longer be hosting the championships, with the Covid-19 situation thought to be a deciding factor. This meant the dictator sometimes cut a forlorn figure on his annual World Bicycle Day procession through the Turkmen capital Ashgabat last June.

Is the UN's resolution for the greater good, or should we look upon anything proposed by this brutal regime with suspicion? We'll just hope that if the day ever comes where every person in the UK owns a bike, it won't be because they were forced to by an autocratic leader who is the subject of an ostentatious personality cult...