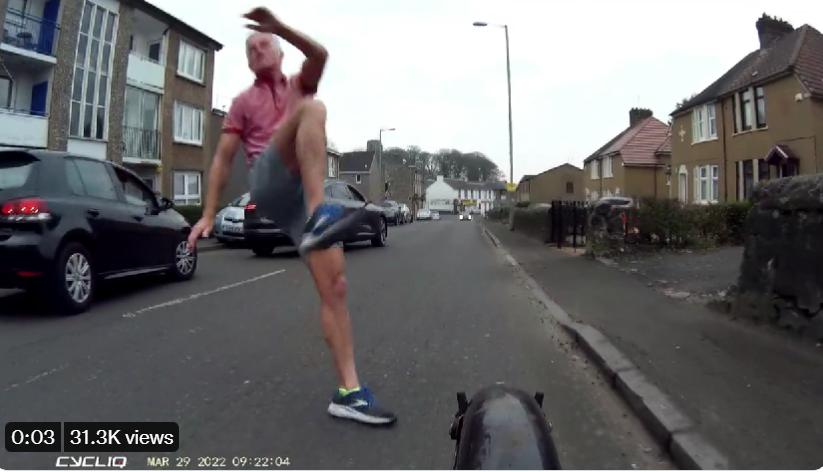 Video: Driver aims ‘can-can’ kick at cyclist, misses – and falls on his backside

Updated with quotes from the cyclist who filmed the incident providing more details.

A video of a driver aiming a kick at a cyclist, missing, and falling on his backside has gone viral on Twitter, with more than 40,000 views on the social network within the first three hours of being posted.

In his post, cyclist Alan Myles said that he had spotted a motorist using a mobile phone at the wheel, and when he stopped and knocked on the window, the driver of the vehicle behind got out and tried to kick him.

Recorded a phone driver this morning. Driver BEHIND, get so angry about me "touchin' the mota" (knocking on the window) that he gets out and does this. Classic of the genre. Phone driver reported. @roadcc @markandcharlie @MikeyCycling pic.twitter.com/EQ2FAFvCHN

“I seem to attract older men with a penchant for attempting violence that is beyond their competence,” Alan told road.cc, referring to a video filmed in Yorkshire that we featured last year in which he was punched on the shoulder and helmet by a driver whom police subsequently told to “engage with anger management” through a community resolution process.

> Video: Driver who assaulted cyclist told by police to “engage with anger management”

Talking about the latest incident, which happened in Lennoxtown, East Dunbartonshire this morning, he said: “Cycling to work having ridden to school with the kids, the first driver nearly pulls into me whilst his using his phone on his lap.

“I circled round, had a quick chat and the driver opened his door onto my bike and knocked my Garmin off.

“I only noticed as i rolled away so doubled back again, picked it up and the ‘kicker’ got out and well ... we know the rest,” he added.

We weren’t the only people who, on viewing Alan’s video, drew an immediate comparison with the infamous ‘Clown takes a pratfall’ video posted to YouTube in 2015, which has racked up nearly 10 million views on the video-sharing website.

The first thing I thought of 😂

Others likened the motorist’s kicking style to a can-can dancer, or Liverpool captain Steven Gerrard’s infamous air kick against West Ham United in 2008.

How i wish I was more adept at photo/movie manipulation.. needs cutting and pasting onto the can can .. or can't can't in his case XD pic.twitter.com/FU56obl8RX

Alan confirmed that he had reported the mobile phone-using driver to the police, but some viewers urged him also to report the motorist who had attempted to kick him.