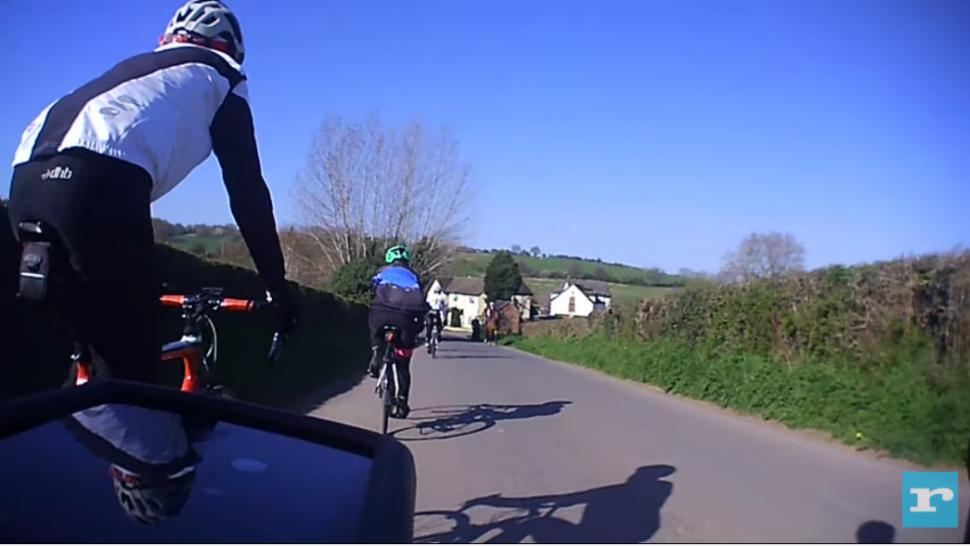 A cycling club member sent the video to road.cc to remind cyclists to be extra careful when approaching horses
by Simon_MacMichael

A video* of a horse rearing up as a group of cyclists approached has outlined the importance of taking extra care around horses, according to the road.cc reader who recorded the footage.

> Look out for horses — here's how to pass horse riders safely

The video shown a group of cyclists slowing down on a descent as a horse and rider comes towards them. The animal was somehow spooked, and a man pushing a pram behind managed to get out of the way as the horse reared and turned.

Luckily, the woman riding the horse managed to get it under control quickly – and road.cc reader Adrian, who shot the footage, told us that the baby in the pram slept throughout.

Adrian told us: “I have posted many near misses by cars and vans, showing careless or wilful dangerous driving over the years towards cyclists and thought this video may be something of a change to remind us of other vulnerable road users, namely a baby in a pram.

“Whilst out riding with [Adrian's cycling club], enjoying the sunshine and new lockdown rules, this Easter Sunday our group of seven riders encountered a very nervous horse.

“Our club president was ahead of me and you can see us bunching up, showing braking was taking place,” he continued. “We would have normally carried much more speed than this to help with the hill to come.”

As for what caused the horse to suddenly rear up, we wondered whether it might have been the flapping jacket that one of the riders was wearing?

“I think you may be right about the flappy jacket as two of our riders passed without any incident,” Adrian replied.

“Louise with the blue jacket was a bit flappy as the temperature had warmed up from near freezing to a pleasant 13 degrees-ish.

“So just a reminder to pass horse riders wide and slow.

“Only the lightning reactions from Dad, removing the pram from harm’s way, saved the day.

“The good news was that the baby remained asleep throughout, completely unharmed and totally unaware of the incident,” he added.

As we highlighted in our article on Monday about the latest update to the Countryside Code, in 2018 Cycling UK teamed up with the British Horse Society to launch a nationwide Be Nice, Say Hi! campaign – the concept was originally devised by Cycle Sheffield – to encourage horse riders and cyclists to share country roads and bridleways safely.

The Be Nice, Say Hi! initiative was drawn up in part due to an incident in the 2018 Royal Windsor Triathlon in which a participant on the cycling leg of the event made contact with a horse and rider as he undertook them at speed.

The incident made national headlines and the cyclist, Iain Plumb, was subsequently given a life ban from events organised by Human Race, and was also found guilty at Windsor Magistrates’ Court of riding without due consideration.

Equestrians, like cyclists, are considered vulnerable road users – as the British Horse Society and British Cycling pointed out in leaflet issued in 2016 entitled Code of Conduct for Horse Riders and Cyclists: “We share similar risks when riding on the road". You can find more advice about riding bikes safely around horses here.

* Update, 11/4/21: The footage of the incident has been removed following a request.