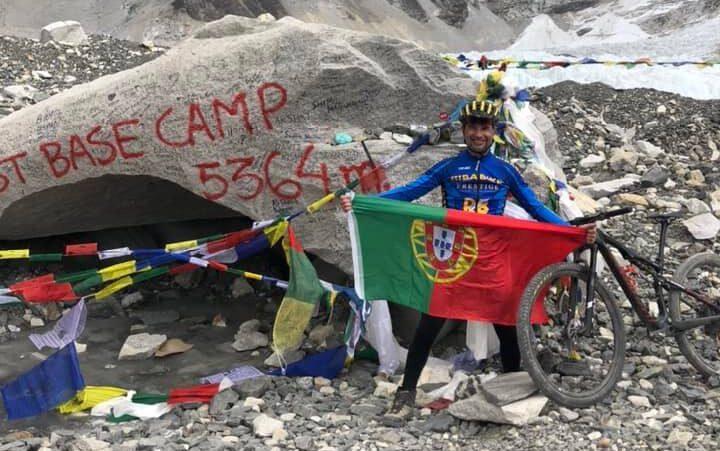 You can all stop Everesting now, this guy has done it for real (well, most of it)

You can all stop ​Everesting now – a cyclist from Portugal has done it for real, and claims* to be the first person ever to cycle solo to the Base Camp of the world’s highest mountain.

Okay, pedalling to an altitude of 5,356 metres isn’t quite what is required to qualify for the Everesting Hall of Fame, with the challenge requiring participants to climb a total of 8,848 metres on multiple laps of an ascent, but we reckon Pedro Bento can be forgiven for not making it all the way to the summit.

To get to the Base Camp, he rode 450 kilometres over 11 days, reports The Portugal News and on the way experienced “several adventures, many difficulties, cold and suffering,” including shouldering his bike over “rocks, suspension bridges and impassable bicycle paths.”

Bento, who was raising funds for the Dreams of Kathmandu and Rainbow Volunteer Club project, said that he is “the first Portuguese to take a bicycle to Everest Base Camp” and the first cyclist to ride from “Kathmandu and Everest base camp alone (only three people had done so before, but in a group.)”

Braving sub-zero temperatures at times, on his journey he also had the “privilege of attending a ceremony of Buddhist monks in a temple at an altitude of 4,200 metres.”

As you can imagine, it was a pretty arduous ride from a physical point of view.

“On the last day I got altitude sickness: headaches, vomiting, body aches, loss of appetite,” Bento said, “and I managed to make the remaining route eating just one KitKat, over two hours of climbing, with the oxygen levels in the blood to 62 per cent.”

The physical toll was such that after making it to Base Camp, he had to be airlifted to hospital in Kathmandu, “due to the fragile state,” he explained.

His efforts have helped raise more than €3,000 “for children who live in completely run-down neighbourhoods, in canvas shacks, in the middle of open-air dumps, even on the outskirts of Kathmandu.

“Right now, the Rainbow Volunteer Club project, in partnership with the Dreams of Kathmandu project, are working with the aim of taking many of these children to school, to ensure that women in these neighbourhoods have access to the hospital when they give birth, to find families for orphaned children and, at the same time, to provide decent meals whenever possible”, he added.

* We say claims, as we have it on pretty good authority that this feat had already been achieved by extreme ultra endurance cyclist Omar Di Felice back in March of this year. You can read all about his incredible effort here.