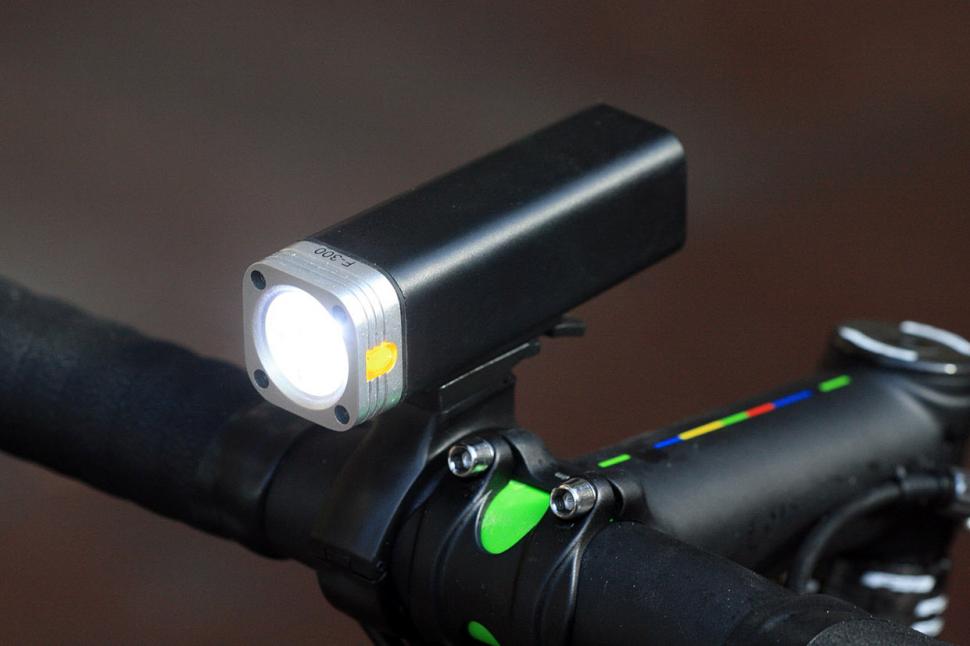 8
10
Weathertight light that will work on short stretches of dark path as well as around town
Weight:
125g
Contact:
www.madison.co.uk
How we test

The Electron F-300 Lumen front light may be small, but as far a light goes, it certainly packs a decent punch.

A single LED with a claimed 300 lumen output, the light should be able to guide you through some dark alleys where streetlight is poor. An output of 300 lumens is never going to see you that far in the pitch black, but it's perfect for urban locations.

The light has a fairly standard three-mode system, offering high, low and pulse. All three modes have their uses. Low was great for riding around at dusk in town because it was perfectly bright enough to make me visible to cars. The pulse was used when visibility was a little poorer and the pulse is quite subtle on this, which I liked. It never made me feel like I was at a disco, yet was obviously flashing. I found the high mode performed surprisingly well on an unlit coastal path I cycle on quite a lot.

The battery life claims seem to be pretty true to real time use. It did hold out for two hours when on high and longer on pulse and low. There is a battery indicator on the power switch which uses traffic light colours to indicate the current charge.

Charging the light happens via a micro USB cable, which takes a couple of hours. There is a really weathertight rubber cover protecting the connector from the elements. It's on the bottom of the light, so helps protect it from knocks as well.

The power button is situated on the rear of the light, so facing the rider. It's in a great location for pressing to turn on or change mode. It does take some getting used to the quick two presses needed to turn it on though.

The light beam itself is fairly decent. I kept it on low for riding around well lit streets and found it gave off a good beam. The real test happened when I took it on a three-mile section of unlit cycle path. I was pretty impressed with it as it lit up the path reasonably well in front of me. I know the path and was happy to keep my speed up with the light.

The light projects right out in front of you and doesn't have any glare for the rider, which is a bonus. A lot of lights can be distracting when you see them out of the corner of your eye.

As for the waterproof claims of the light, which is that it is 'robust' and 'water-proof', I have to say these are very true. I had ridden my bike, washed it and put it away, only to go outside three days later to see the light on the soggy grass. It had been left in at least two days of solid rain and lived to light another day.

The light is aimed at road users. The manufactures claim it is a "high performance 300 lumen light packed with features". It certainly works very well as a front light and is very robust.

Rate the light for quality of construction:
10/10

The light feels solid and well made.

The power button is easy to use, but it fails here on the ability to release the light from the mount without a bit of a struggle.

The quick release clamp is really easy to use.

Three nights outside in the cold and rain, the light still works like it did when new.

The battery length is pretty decent.

I can see this light lasting, it has already had a bit of a hard life and is still going strong.

Rate the light for weight, if applicable:
8/10

It's light enough to not be a burden, yet heavy enough to feel well made.

A good price for a great little light.

The light performed just as it should. It lit an unlit path well enough to travel safely.

I was impressed with the water proof level.

The light was difficult to remove from the mount.

I usually ride: Giant defy  My best bike is:

I've been riding for: Under 5 years  I ride: A few times a week  I would class myself as: Experienced