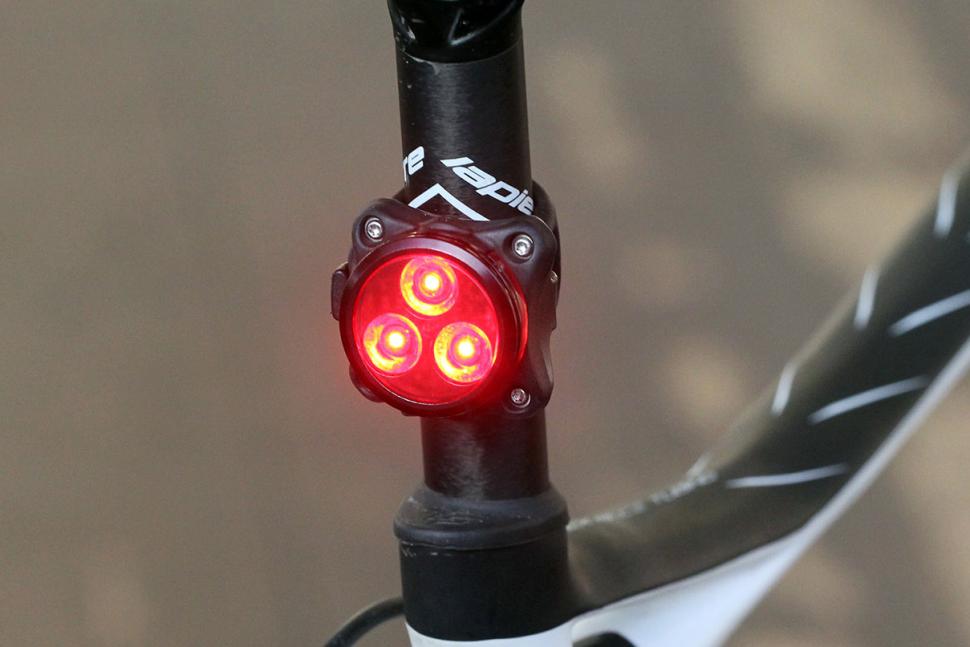 While the Lezyne Zecto Auto features a clever and power-saving automatic shutoff, it's underpowered compared to similarly priced lights and not without a few niggles.

The Zecto offers six modes, running from a steady economy mode through various pulsing modes, to a flashing daytime mode. A short press of the power button, which is easily accessible from the saddle, switches between modes, while a sustained press turns the light on and off – all very standard. Though it's no bad thing giving the user options, a couple of the pulsing modes are so similar in terms of output and battery life that they don't really offer anything different from each other. It's also worth noting that while Lezyne claim a headline 20 lumen power output, you only get this in one mode – daytime flashing – while the others make do with 10 lumens and the eco mode 5.

For night commutes on unlit roads, the Zecto's pulsing modes provide enough power to be seen and stay safe. However, this can be achieved by lights costing nearly half the price, in smaller and lighter packages too. Where the Zecto must justify it's nearly £40 retail price is in its daytime performance. In this respect, it comes up lacking as it is clearly underpowered compared to other lights in this price bracket; the 20 lumen output is just not enough to really stand out in murky and poor visibility conditions. For more urban rides, the Zecto does provide some visibility from the sides to improve safety at junctions, but again, there are other lights that are better in this respect.

The Zecto Auto's headline feature is the light's automatic shutoff system, which turns the light off when no movement is detected for three minutes. To turn it back on, give the light a small tap, and it immediately springs back into life. This feature is great for mid-ride café stops when you can easily forget to turn a light off, and also helps to eke out battery life that little bit longer when stopped at long traffic lights. However, as handy as this feature is sometimes, it adds £10 onto the retail price compared to the standard Zecto, which is identical in terms of light output. Whether this feature is worth the premium is debatable, especially as it pushes the Zecto Auto into competition with lights that are much more powerful and more suitable for daytime riding.

Battery life was found to match the claimed run times quite well, with the flashing and pulsing modes reverting to a low economy steady mode as the battery reached empty. Handily, Lezyne have added some battery charge indicators to the side of the light so there shouldn't be any surprises halfway into a commute. Run times for the pulsing and 10-lumen constant modes are in the 4-hour region, which will mean a mid-week charge for those with a reasonable 30-minute each way commute. However, the 20-lumen day time flashing mode is capable of running for 10 hours which is quite impressive. This is due to the slightly extended pauses between flashes when using this mode. Though the delay is noticeable, it doesn't compromise safety in my opinion.

The Zecto attaches to a seatpost via a stout rubber strap, with rungs to accommodate different seatpost diameters, though it won't work with aero posts. The attachment process is quick and easy so there's not much faffing required when removing the light to be charged. The Zecto's rear cover includes a moulded-in clip to enable attachment to saddlebags or rucksacks. This clip is on the large side and requires quite a thick strip of material to attach securely. In its clip-on configuration, the light is rotated 90 degrees which reduces side visibility considerably, as the power button and charging port now find themselves on the sides of the light instead of on the top and bottom respectively.

The clip design also means that the light sits a little off to the side when attached to the seatpost, but this was merely an aesthetic oddity and didn't affect the direction of the emitted light or pose any thigh clearance issues.

A standard micro-USB cable is used to charge the Zecto, taking approximately 2.5 hours to charge from empty. The use of a standard charging port is welcome in these days when people have whole drawers filled with cables. Most people will already have a micro-USB cable kicking around somewhere, so the Zecto isn't adding to the clutter.

Having said that, due to the deeply recessed design of the charging socket, some micro-USB cables may not actually charge the light at all without having to forcefully hold the cable and light together. Indeed, the cable that was supplied with the light didn't actually work and a replacement, with a slightly greater length of exposed contact, had to be used. The charging port is sealed by quite a thick and stiff rubber flap which requires a bit of fiddling to get to seat properly inside the recess.

In summary, the Zecto Auto's automatic shutoff system is a neat feature that prevents a lapse of memory from completely depleting battery life. However, this comes at a cost as the Zecto Auto is underpowered for daytime riding compared to some of its competition, and isn't without a few niggles such as the poorly designed charging port.

The Lezyne Zecto Auto is targeted to users requiring a high output rear light, including the ability to use it for daytime riding due to its 20 lumen "Daytime Flashing" mode

3 LEDs in a plastic/CNC'ed aluminium housing

As usual from Lezyne, the machining work is good and the overall quality and feel of the light is positive. However, the fit of the seal over the charging port could be improved as it currently requires a bit of attention to get to seat correctly.

The one button operation is intuitive and easy to use with gloves on.

The rubber band attachment is simple to use and is adaptable to different seatpost diameters. However, it won't work for aero posts and the band is too long to attach to a seatstay. The light also sits oddly off to one side of the seatpost, though this doesn't affect the performance.

The sealing of the charging port works, but requires a bit attention to get the rubber flap to properly seat in the recess.

The battery life is accurate to that quoted. The run time for the pulsing modes is a little on the short side for reasonable daily commutes, but the daytime flashing modes 10 hour run time is quite impressive. What really lets the light down is the design of the charging port which is too deeply recessed to work with a lot of micro-USB cables, including the one provided with this test light.

The automatic cutoff feature is neat and useful if you often forget to turn the light off. However, the daytime mode isn't powerful enough to cut through murky and poor visibility conditions.

No issues during the test period, apart from the finicky charging.

The auto shutoff is an interesting feature, but the light lacks power compared to others in this price bracket.

A decent enough light but doesn't stand up for the true daytime riding that it's intended for.

Charging port which didn't work with some micro-USB cables.

Did you enjoy using the light? The issues trying to find a suitable charging cable clouded my enjoyment.

Would you recommend the light to a friend? If they were very forgetful.

I usually ride: Canondale EVO Red  My best bike is:

I've been riding for: Under 5 years  I ride: Every day  I would class myself as: Semi pro