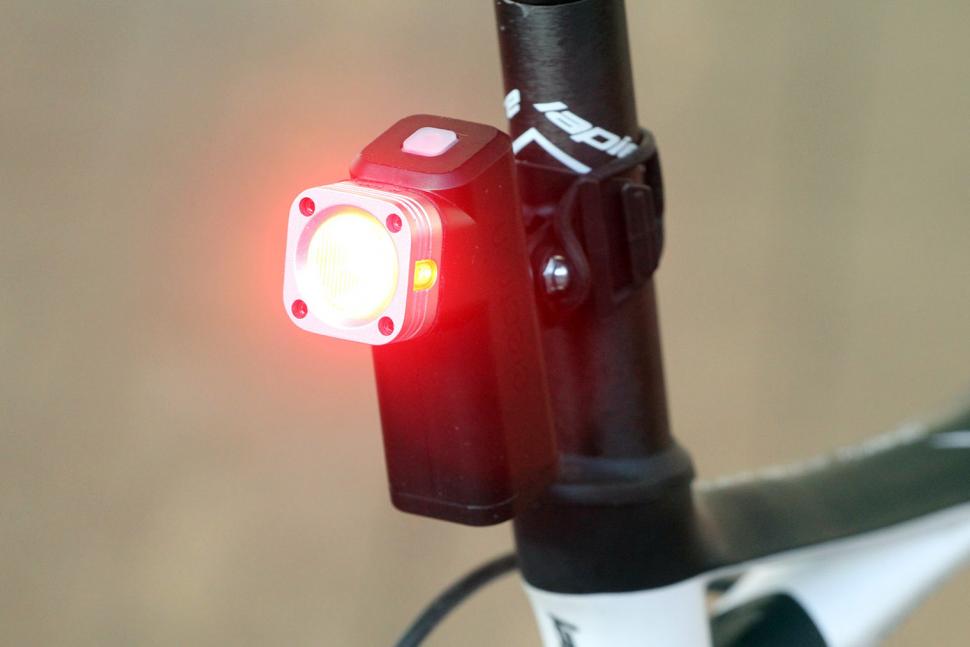 The Electron R100 rear light has a sturdy construction and a very bright beam, but the unusual clamp means it may not appeal to all cyclists.

As you might have guessed, the 100 in R100 indicates the number of lumens. For a rear light, that's pretty bright, although of course you can get brighter. It's plenty to warn cars of your presence when on dark country roads, and good for commuters in city streets as well. According to the Electron website, the beam illuminates the road behind you with a red glow. It also has a 'flat top' so approaching motorists will see you but not be dazzled. This all depends on the angle you set the light, of course. More on this below.

You get three modes: constant, pulsating, and flashing. The integrated lithium-ion battery gives you a massive 28 hours when the light is on flash mode, 6 hours on pulse, and 3.5 hours on constant. While testing the light, these claims proved to be correct, with the light actually staying on for nearer four hours in constant mode. Charge time is a claimed 12 hours (again, about right) using a mini-USB port – an increasingly common method these days.

The light unit is an unusual shape, a sort of upside-down L, with the battery in the upright bit, and the section containing the bulb and lens in the sticky-out bit. Very scientific this. The sticky-out bit is not at right angles to the upright bit, which means you have to tilt the upright bit to an angle of about 70 degrees so the light shines backwards horizontally. This is easy to do, as there's a single pivot point between the light and the clamp where you can adjust the angle with a finger-bolt. The end result is the upright bit sitting roughly parallel to the angle of your seatpost, while the light's beam shines straight back.

As is usual with many rear lights, the Electron R100 comes with a clamp that you fit round your seatpost. It consists of a plastic plate and a strong rubber loop. Rather than being semi-circular, so as to align completely with the outer edge of a standard seatpost, the plastic plate has a notch in it, so you can fit it on aero seatposts. Nice idea, but this means that on standard seatposts the whole face of the plastic plate is not fully in contact with the seatpost, which means the clamp has a tendency to wander sideways, possibly exacerbated by the whole light unit vibrating on the single pivot point, with the end result that after a few miles the light can end up not shining straight back at approaching traffic.

And another niggle: the finger bolt that you use to adjust the angle of the light sticks out about 2cm from the pivot point, and I found my thigh rubbed against this bolt on every pedal downstroke, which was very annoying, although that might differ according to your own saddle position (not that mine is unusual).

The Electron R100's recommended retail price is a penny under £50, although you can find it discounted to about £45 at a few on-line stores. This puts it very roughly in the same price bracket as lights like the Niterider Sentinel or Cateye Rapid XX, but the former is a neater construction, gives out 30 lumens and has funky lasers that create a 'virtual bike lane' on the road, while the latter is also neat, gives out 50 lumens, and can often be found further discounted down to about £35.

All in all, the Electron R100 has very bright illumination but the price isn't a bargain. It'll do the job if you need a rear light for a bike with an aero seatpost, but you still need to watch out for the protruding finger bolt. Definitely worth trying before you buy.

This is a rear light that attaches to the seatpost of your bike with a clamp. The distributor's website highlights these features:

'100 lumens of rear LED power! Single LED generates a wide beam with a flat top, designed to be seen, not dazzle. 3.5 hour run time on maximum power. This light will illuminate the road red just behind the bike. Push-button waterproof switch, easy to operate even with winter gloves. Robust, water proof design, perfect for those wet winter nights. GoPro compatible bracket will even fit aero posts thanks to it's unique design. Micro USB lead included."

Construction is very good. The light unit is definitely sturdy enough to withstand some very bumpy roads and being dropped on the workshop floor.

The light is easy to use in that you use a single button to turn the light on and off, and to toggle through the three modes. The button can be hard to operate with thick cloves, but that's an issue with many lights.

The clamp is designed to attach to standard and aero seatposts. On standard seatposts there seemed to be not enough grip to hold the clamp in place, and so the light sometimes twists to one side. This could be exacerbated by the whole light unit vibrating on the single pivot point. Generally, rear lights that attach more directly to the seatpost, such as the Leyzene Zecto or Blackburn Super Flea, seem to be less prone to twisting.

Very good. This light has been on the bike during some test rides in torrential rain storms and never missed a beat.

The battery is very good. The manufacturer claims 28 hours of light when in flash mode, 6 hours on pulse, and 3.5 hours on constant. While testing the light, these claims proved to be correct, with the light actually staying on for nearer four hours in constant mode. Charge time is a claimed 12 hours and this was also correct.

The light puts out a very bright beam but it's let down by the clamp, which allows the light to twist sideways, so overall performance is not good.

The total weight with mount is 113g. Very good for the degree of brightness and battery run-time provided. Lights with bright beams and long run-time are often heavier.

The Electron R100 costs about £45. Looking only at a very crude lumens-per-pound basis, this is good value. But take the other features into account and it's less good. For less money you can get lights which, while not as bright, are bright enough for most cyclists, and seem to be better designed for fixing to your bike.

The Electron R100 does well in its primary function, in that it puts out a very bright beam. However it's let down by the clamp, meaning overall performance is compromised.

Very bright beam, especially for the weight of the unit.

Did you enjoy using the light? No.

Would you recommend the light to a friend? Maybe, if they needed a bright light on a bike with an aero seatpost, but I'd still recommend they tried it first.

The Electron R100 has very bright beam and impressive battery life, and on that it would score 9. But the price isn't a bargain, while the twisting clamp is annoying (unless you have an aero post) and the protruding finger bolt is irritating, all together knocking off a couple of points, to give a total score of 7.

I usually ride: an old Marin Alp, an old Cotswold steel classic, an old Jensen steel classic  My best bike is: an old Giant Cadex carbon (can you see a theme here?)