7
10
The latest biography, giving a well-presented memento of his attempt on the Hour record
Weight:
839g
Contact:
www.vintage-books.co.uk
What the road.cc scores mean

Would you like a complete and up-to-date biography of Sir Bradley? As the title suggests, this book is not it – and in fact we should not expect to see such a book until he has finished his cycling career, which will be after the Rio Olympic Games at the earliest.

Instead we are treated to a series of interim biographies, each marking a significant milestone in his career: In Pursuit of Glory (2008); On Tour (2010); and My Time (2012).

Bringing things right up to date we now have My Hour. This story will rightly be a full and important chapter in any complete 'whole of career' biography, but for now we have this semi-coffee table book.

As with his previous biographies, the book covers a lot of his earlier career, but in this case it focuses on events that are relevant to the Hour record. Given Wiggins' well-known knowledge and respect for the history of cycling, it is no surprise to see his thoughts on several of his Hour record heroes.

Wiggins sees Merckx's record as the benchmark, and reveals that 'I'm planning on doing some tests with similar kit to see what the numbers are', with a view to perhaps taking on the Athlete's Hour with the appropriate restrictions in equipment. Could be interesting; I hope that we hear more about it soon.

Miguel Indurain is another of his heroes, and at the time of his 1994 record 'to find out what was going on in the sport you had to wait until Thursday when Cycling Weekly came out. It seems crazy now, but I had to wait six days before finding out whether Indurain had broken the Hour record or not.' The 'cycling fan' mentality is still in Wiggins, so when he discovered that Big Mig was going to be present at his attempt, he did something that any fan of the sport would want to do: he asked wife Cath to bring along one of Indurain's yellow jerseys that he had so that it could be signed. 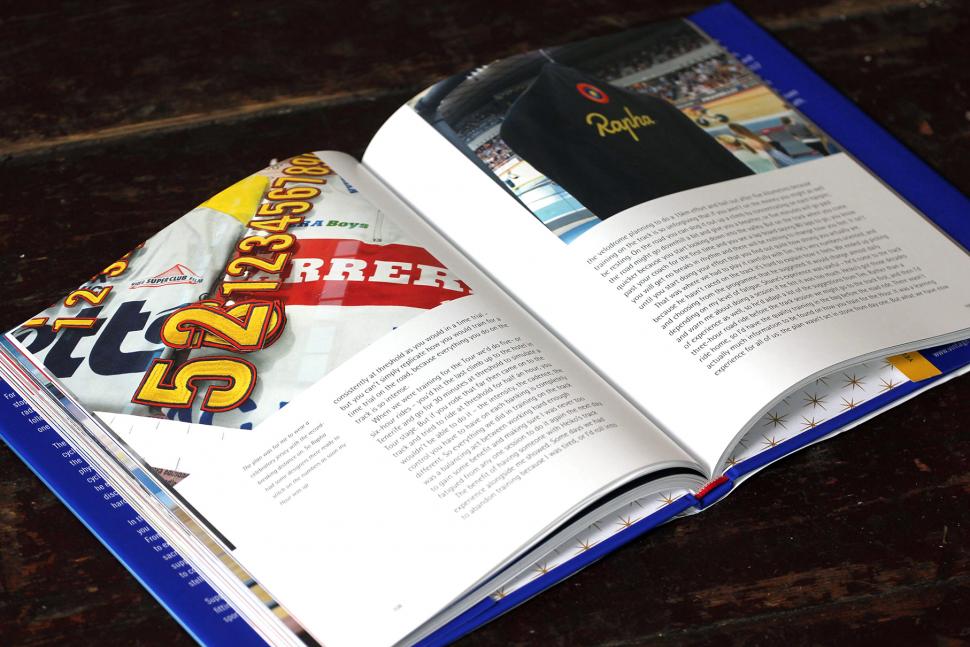 The book is full of high quality photographs, many of the bike – and many of Wiggins with various formats of facial hair. On the day it was a clean shaven Wiggins, looking for every last marginal gain. When having a final shave and haircut on the morning of his record attempt, 'the hairdresser asked if I was doing anything interesting today. 'Not really,' I said.' It is stories like that which make Wiggins such a good subject for writers and interviewers, and naturally many have already been told on this website and elsewhere.

There was an unsuccessful attempt on the British 10-mile Time trial record (covered here), which was a once-in-a-lifetime opportunity to satisfy an ambition to 'do a '10' as World Time Trial Champion, to show the rainbow jersey on British roads.'

The reasons for attempting the record are covered, and obviously the change by the UCI (the governing body of cycling) to allow current technology was important. However, for Wiggins, adding to the romance of the Hour record is important, and the opportunity to join a select group of five riders who have won le Tour and held the record is what really motivated him.

There was some comment at the time about the legality of the handlebar used, as it was claimed it was not commercially available (see here); Wiggins assures us that 'contrary to what was claimed after the record, anyone can buy their own – Pinarello offer the service through one of their brands, MOST.' I suspect that if you need to know the price you can't afford them.

Although the attempt was successful, with a significant increase over Alex Dowsett's record, there is a good explanation for the difference that atmospheric pressure makes and why it prevented Wiggins from going even further. For every 20 millibars increase in air pressure, the lap of a 250-metre track will take 0.1 seconds longer. As the air pressure continued to rise, he even had to drop down to a slightly lower gear than that used in the final tests so that he would still be pedalling at his optimum cadence.

Perhaps we should be grateful that as a result we have been left with a record that is seen by most as merely very difficult to break, but not unassailable, so that the recent surge in record breaking attempts might continue.

> More books? Here are our favourites at road.cc

There is a mention of Team Wiggins and its aims), and this is contrasted with his own experience at Team McCartney which 'lasted a whole two weeks before the team collapsed'. On past performance we can expect another partial biography at some time to cover this latest phase of his cycling career.

This book brings together a lot of the stories and pictures from the record attempt. While many have been seen before, this book gives more background and provides a well presented memento of the occasion.

The latest biography, giving a well-presented memento of his attempt on the Hour record

Make and model: My Hour by Bradley Wiggins

The blurb says: "In this revealing book, Sir Bradley Wiggins takes you behind the scenes of his record attempt. From planning to preparation, and from training to execution, Bradley shares his thoughts on his sacrifices, his heroes, and the people who have supported him along the way – as well as what is to come as he heads towards the twilight of his stellar career."