Bells and Bikes by Rod Ismay

7
10
A most readable and entertaining book – despite the unlikely subject matter
Weight:
200g
Contact:
www.v-publishing.co.uk
What the road.cc scores mean

After reviewing Greig Leach and Rick Robson's books, I honestly thought that we had seen all the books we were going to about the Tour de France's visit to the UK. Surely there could be nothing more to say about our Grand Depart? I was wrong, as Rod Ismay proves with Bells and Bikes.

It's taken a while to arrive, but another minority interest has now been unearthed, linking bell ringing and le Tour. Not the sort of bell that might feature on your handlebar, but the sort you would find in a church tower.

What's the connection? Well obviously we saw Bradley Wiggins ring a bell at the London 2012 opening ceremony, so perhaps that was seen as something to build on. Or could it be the chance to give 'the big ring' another meaning? Perhaps there could be an opportunity to link Campagnolo and campanology...

No, the real connection is that author Rod Ismay (pictured below, with five-time Tour winner Bernard Hinault) is passionate about Yorkshire, cycling, and bell ringing. His knowledge and enthusiasm for all three is very evident, and is the reason that this book exists. Ismay's day job is working as an accountant at the Post Office, and he is probably equally as passionate about that as well, but manages to keep it under control. He is clearly what you might call 'a character'. 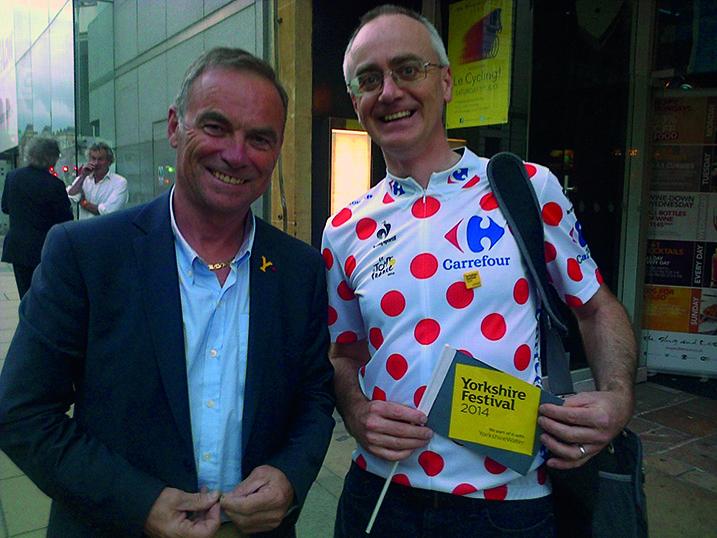 The book is the story of Ismay's involvement in organising celebratory bell ringing to take place in churches along the route of le Tour before and during the event – and after, at the subsequent Tour de Yorkshire. It is 'an improbable journey of [bell] ringing, cycling, community and culture'.

As part of his preparation, Ismay had to decide on a name for a website and Twitter presence; disappointingly he rejected 'le Tower de France' and settled on the only permutation of bikes and bells available at the time: https://bellsandbikes.com.

Improbable as it may be, it may not be the most esoteric TdF-related website out there, and we are introduced to one of Ismay's favourites from an Australian duo 'whose lives revolved around cows on the route of the Tour de France'.

Ismay accepts that while his venture was unusual, he was outdone by the Hebden Bridge Piano Festival, which built a Piano Porté so that 18 cyclists could tow a grand piano up Cragg Vale – while it was being played. You couldn't make this up. Since the piano music was being played in the key of F, and the church bells at the start of the climb were in the same key, it was inevitable that they would end up working together. (In case you were wondering, the piano took 3 hours and 52 minutes for the climb, whereas the race took about 17 minutes.) It is those exploits and the stories behind them that make this book so worthwhile – you just never know what to expect next. I never thought I would be interested to learn about Sub Space, 'a magazine for Sub-Postmasters'. Don't be surprised to see it appear on a future edition of Have I Got News For You...

The book provides more information about bell ringing than I have ever read, but for the most part it is interesting and easy to understand – although I did get lost when trying to understand the rationale for 'seven factorial', which is '5,040, and this is the milestone defined as a 'peal'.' Anyway, I now know that it requires three hours of ringing. 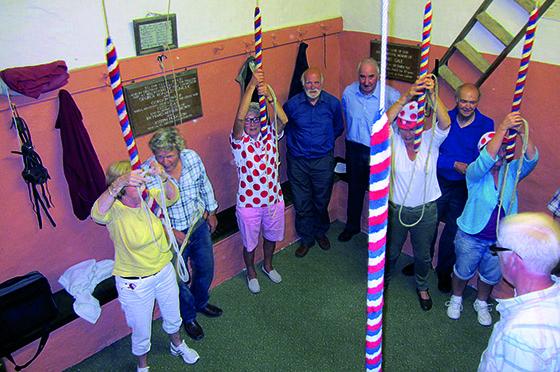 Throughout the book Ismay tries his best to encourage new recruits to continue the fine tradition of bell ringing – or more specifically the 'English Change Ringing' practised in this country. A comparison is made between cycling and bell ringing: the latter is becoming an increasingly niche activity practised mainly by the elderly, and apparently it could learn a lot from cycling's success – if only there were a willingness to embrace change.

Ismay's endless enthusiasm is evident throughout, and makes for a most readable and entertaining book. British eccentricity at its best.

A most readable and entertaining book – despite the unlikely subject matter

Make and model: Bells and Bikes by Rod Ismay

Rod Ismay has a passion (some would say obsession) for the Tour de France. If you think you know someone who is obsessed, think again, but fortunately Rod's issues found their natural home when his native Yorkshire became the host for the 2014 Grand Départ.

Rod also has another passion – as well as cycling he is quite keen on bell-ringing, so why not combine the two? Why not get all the bells ringing along the Tour route, why not organise countless events, countless meetings, why not drag in churches far and wide, why not involve your employer, your friends, your family, why not photo-bomb five-time Tour winner Bernard Hinault?

Rod threw himself, his King of the Mountains jersey and his endless enthusiasm head first into making this Grand Départ about as good and memorable as it could be. Rod has written with passion about Yorkshire, its people, those two stages of the world's greatest cycle race and the churches, ringing their bells all along the race route.