A little over a year ago I reviewed Book de Tour, which portrayed highlights of the 2014 Tour de France through the medium of watercolour paintings. The artist Greig Leach is at it again, but instead of Le Tour, this time in his Art of Cycling he has covered the 2015 World Road Championships; with his home town Richmond being the host (Virginia, not Yorkshire), it was a once-in-a-lifetime opportunity that could not be missed.

Cycling is far from the most popular sport in America, so there was some justifiable nervousness about holding the event there. However, it is generally accepted that Richmond provided good organisation, a good course, and worthy winners.

Mementos of Le Tour are many and varied, whereas there is normally relatively little available for any world championships, so it is encouraging to see the good work of the Richmond championships being followed up with this book. 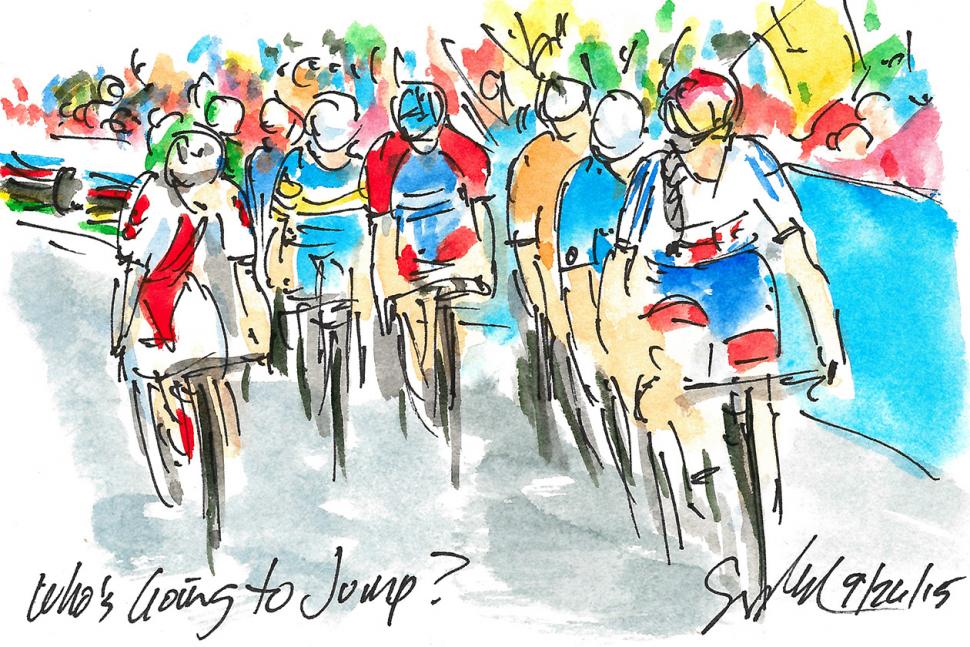 If books are not your thing, there is another option: it was recently announced that Peter Sagan's home country has featured his championship win on a stamp, as we reported here.

As with the TdF book, on each page Leach provides a watercolour of some key moments from all 11 races in the championships, supplemented with a few lines of explanatory text. As before, the watercolours are designed to capture the speed and movement of the race, but the rate of production does mean losing some detail. 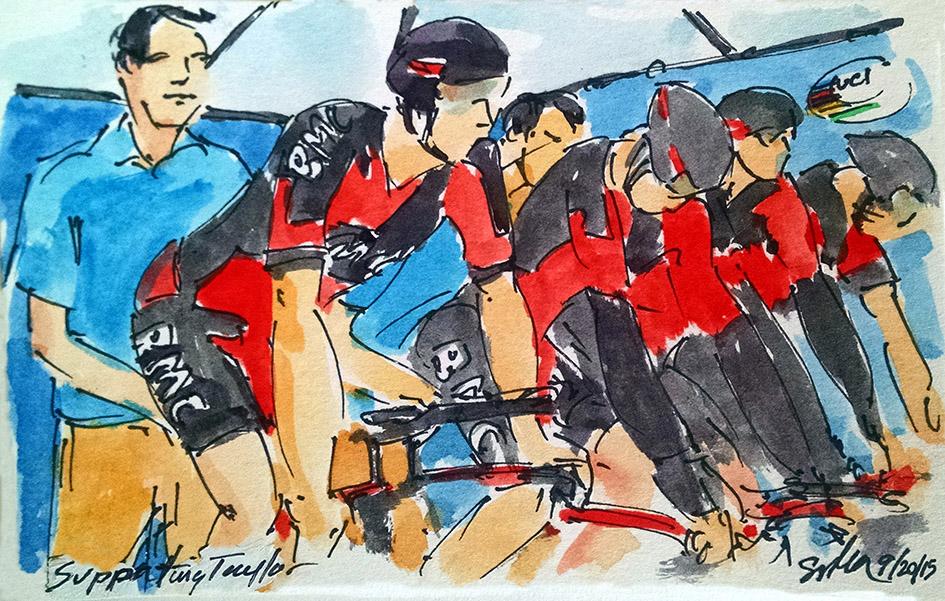 An important difference is that instead of painting from live TV pictures, Leach was present at the event – which meant he could also cover races that were not televised. When we learn that none of the junior races were broadcast because 'unfortunately the UCI was unable to sell these events to any of the television companies', you realise that while we might be making some progress on achieving coverage beyond the 'senior male' races, there is still work to be done. A map of the course for each race also shows the locations that Leach used for each painting. Given the recent debate over the necessity and number of motorbikes used in professional races, it is perhaps fortunate that he abandoned his idea of 'riding pillion on a motorcycle alongside the peloton to capture the race in real time'.

> Other books every cyclist should have on their shelves

For the most part, the book sticks with the successful formula of the previous one. There are a few obvious differences, such as the hardback cover and a few adverts from Richmond-based businesses, but this is a result of a less obvious difference – that Leach was able to have the project funded by a local paper (the Richmond Times-Dispatch), instead of using Kickstarter again, which, he says, 'is a stunning amount of work to make happen'.

Greig Leach says: "This book continues my celebration of cycling through my original watercolors created while races are being contested on the open road. The 2015 UCI Road World Championships took place on the streets of my adoptive home town of Richmond, Virginia. I created this artwork, from the epicenter of the championships, with everyone eagerly looking over my shoulder as they awaited the climax of the race and the unveiling of the winner of the coveted rainbow jersey. Each painting is presented with my interpretation of the unfolding race, taken from my daily blog posts at www.theartofcycling.blogspot.com. I trust you will enjoy my take on the power and speed, heartbreak and jubilation of professional bicycle racing."