6
10
Decent construction and power but it's pricey and let down by the narrow beam pattern
Weight:
108g
Contact:
www.moorelarge.co.uk
How we test

There are four main considerations when buying a light, in my opinion: performance, price, ease of use and build quality. So how did the Sigma Buster 200 LED front light fare? In a nutshell, it's very good as an urban light to be seen by and is solidly constructed while being nice and light, but it's slightly fiddly to use and you can buy similar lights with an RRP about £20 cheaper. However, if you look online you can currently find it discounted by about £15.

It has six modes: three steady (200, 100 and 50 lumens) and three flashing (normal, strobe and SOS). Burn times compare well to those claimed by Sigma. On full power it lasted 1hr 50mins (claimed 2hrs) with the battery indicator showing red for the last 30mins, but then it died suddenly and without warning. On normal flash it lasted an excellent 9:50 (claimed 6hrs) with the last 50mins on the red indicator. It charged in 2:30, faster than the stated 3 hours.

The beam from the single LED is very bright – you don't want to look straight at it from close up, that's for sure. This makes it perfect for using to alert other road users when cycling around town. The light has a tiny window each side for side visibility, but you can barely see them under streetlights.

Despite Sigma's claims, I didn't rate the Buster 200's performance on unlit roads. Using it on the towpath portion of my commute in steady mode, it throws its beam quite far ahead but it's so narrow and focused there's little peripheral illumination. Also you have to choose between either seeing a way ahead, or pointing it down to see what's closer in front of you. I much prefer a wider-spread beam pattern, like that of the similarly priced Knog PWR Commuter 450 and Ravemen CR300, for example, or the £10 cheaper Niterider Swift 450.

My initial impression of the light was that it looked a bit cheap, with its removable rubber casing, but I mistook the lightweight aluminium body for plastic. In fact, build quality is good, as you might expect for a German-engineered unit, and the case protects it if you drop it, which I did. It's a good size and weight for commuting, fitting easily in a jacket or jersey pocket. However, the plastic screw-bracket handlebar mount is a bit disappointing. It stays put fine with rubber shims and you don't need a screwdriver to attach it; instead, the long screw tightens by hand, but a disconcerting amount of it protrudes just where your thumb goes while sliding the light on or off. It's a bit fiddly aligning the light body with the mount too, but on the plus side this swivels so you can adjust the direction of the beam. You can buy a rubber strap mount separately – it's a shame Sigma didn't supply this instead of the screw bracket because they're so much quicker and simpler to fit. Also in the box is an action camera mount adapter, for attaching the Buster to your helmet. 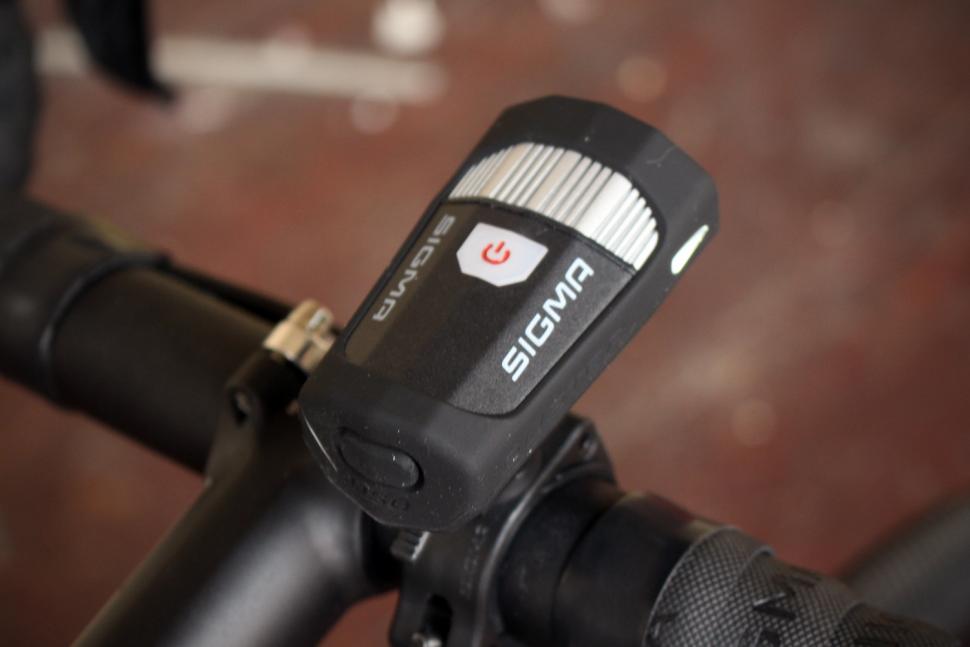 The power button serves triple duty as a mode selector and battery indicator, showing green and red. To switch the light on you need to do a fast double-press, to turn it off press and hold. This means it's virtually impossible to switch it on accidentally when it's in your bag, which is a good thing. However, you have to get the timing right to turn it on – once I thought it had died but I just wasn't pressing it fast enough, lesson learnt! Also, the button can be a bit fiddly to operate because you have to press it quite hard, and when wearing gloves it's hard to feel it because it's almost flush with the light body. Toggling through modes takes a single press of the button.

Overall, there's a lot of good features in the Buster 200, but it doesn't add up to a great light for the money, mostly down to the narrow beam pattern, which makes it unsuitable for using on unlit roads.

SIGMA SPORT represents German technology at its highest level, combining innovative design with precision engineering. We test all our products in our in-house laboratories to withstand the harshest conditions, ensuring quality continually through our production.

To turn it on you need to press the button twice in quick succession; too slow and it doesn't work. Also it's tricky to feel the button through thick gloves as it's almost flush with the light body.

Bracket is a bit fiddly to fit/remove quickly, the screw protrudes a fair way so you could potentially catch a finger on it, and there's no swivel head. I would prefer a rubber strap mount.

It's described as water resistant, not submersible, so I wouldn't rely on it in prolonged downpours.

Performed in line with the claimed times, which are pretty good.

It works very well as a light to be seen by, but for a similar RRP you can buy lights with a better beam for riding on unlit roads, such as the Knog PWR Commuter 450.

The screw-bracket is inferior to the light.

It didn't impress me nor light my way particularly well, as promised by Sigma, but the bright, focused beam certainly catches motorists' attention.

The bracket with screw sticking out; too narrow and dim a beam in steady mode; limited side visibility.

Did you enjoy using the light? Yes – as an extra flashing light to be seen by.

It's an okay light, let down by a narrow beam pattern, bracket and price for what you get.