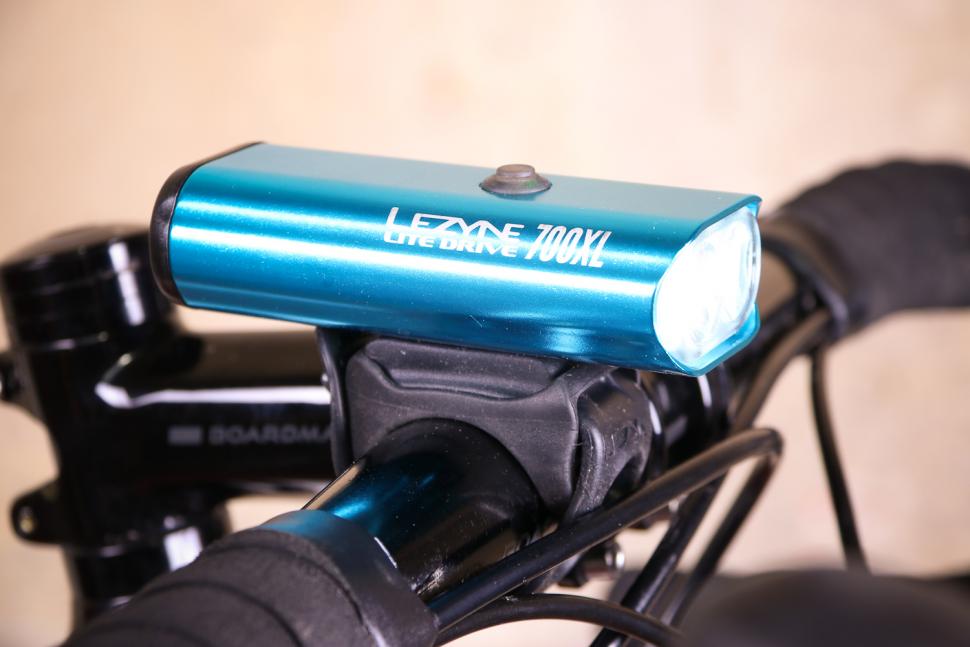 7
10
Good value front light with enough output for most road use, lots of modes and acceptable battery life
Weight:
150g
Contact:
shop.upgradebikes.co.uk
How we test

As the entry-level light in Lezyne's Performance range, the Lite Drive 700XL offers enough brightness for riding in the pitch black at a price that is pretty competitive.

The light has an anodised metal body, with a simple rubber strap to fix to the handlebar. So far, so Lezyne. One thing you couldn't accuse Lezyne's range of is wilful and confusing variety. The five Performance lights are all very similar indeed, with a range of output levels and battery run-times.

They all appear to have the same mounting mechanism, the same range of modes and the same control system, so you just choose how much light you want (or how much money you want to spend) and pick the one for you.

Fitting it is simple with the classic stretchy rubber strap. It's very quick to swap between bikes, although the downside is that it's not held in place as rigidly as some more engineered mounting solutions. Generally I found it stayed where I put it, but rattling through a pothole would be enough for it to swing forwards. Often the solution to this is to hang the light underneath the handlebar, although that can be tricky here as it can foul on the brake and gear cables.

Operation is straightfoward, and a lot like many other lights: long press on the button to switch on and off, and short presses to cycle through the modes.

There are a total of eight output modes – five are constant, ranging from the full 700 lumen Overdrive mode to the 15-lumen Femto mode. There's also a day flash mode, which is two short flashes, repeated once per second. This uses the full 700 lumen output, and so is pretty eyecatching and effective at getting you noticed. A further flash mode uses a much lower power and single flashes, giving longer run-times.

The final mode is Pulse, which is much like you'd imagine – a gentle pulsing on and off.

Run-time on full Overdrive mode is a scant hour and a half, but I found that the second most powerful constant mode ("Blast", 400 lumens) was enough for most night-time riding, and has a run-time of three hours.

Generally, run-times match those claimed, although I'm afraid I didn't put the stopwatch on the Femto mode, which should run for a whopping 76 hours.

A neat feature, which is a bit of a Lezyne signature dish, is the "race mode", which allows you to limit it to just two modes (the 700-lumen overdrive and 150-lumen economy). The advantage is that it keeps things simple and avoids the dreaded moment where you have to cycle it via a flash mode to get back to high-power, depriving you of light at the precise moment you decided you needed more of it.

Lezyne doesn't specify which type of LEDs are used other than to describe them as "ultra high output". They are closely spaced, each with their own lens, and generate a beam that is broadly circular, although as you can see, above, from our tests, it is brighter towards the lower half and with a slight darkening in the upper left hand corner. My suspicion is that this is more down to assembly tolerancing and variability than a deliberate attempt to offer a cut-off beam. I found it relatively straightforward to direct it such that the bright central area was on the road in front of me rather than into drivers' eyes.

Comparing to other lights in the same price bracket using our comparison tool, it must be said that a number of lights with a claimed 600 lumens appear to outshine the Lezyne (on 700 lumen Overdrive mode), for example the Cygolite Dash Pro 600 and the (admittedly more expensive) Knog PWR Road 600. This goes to show that manufacturers' claims of lumen output don't necessarily offer a perfect comparison. The housing has cutouts either side of the lens to allow some light to spill out to the sides, and this certainly helps with all-round visibility.

Commuting during the winter months, I tend to use a daytime flash mode in the mornings and a mixture of steady modes for the way home. With a 30-35-minute journey in each direction, I found that I could get three or four days before I needed to recharge. That's a lot less than when using larger (more expensive) lights with larger batteries, but the good news is you get plenty of warning via the battery light indicator, so I never found it ran out of charge unexpectedly.

The power button lights up green when full, yellow when below 50 per cent, red when below 10 per cent and flashes red when below 5 per cent. In reality, it errs commendably on the side of the conservative, such that I found I had enough juice left to get me home even when deliberately leaving the office with it flashing red.

Charging is via the ubiquitous (for now... USB C is on the way, folks) micro USB socket. It's concealed behind a chunky rubber bung on the back of the light, which does a very good job of keeping water out, but is also quite effective at keeping some of my USB cables out. The supplied cable fits in fine, but the moulded part of the plug of some of the charger cables I had lying around wouldn't fit through the hole; an issue because the actual socket is recessed 13mm into the light. This does make it fiddly to connect up, and I think that it's an area where the light could be improved.

Overall, the Lite Drive has a decent level of output for a pretty reasonable price. The battery capacity is less than some other lights, but it gives you plenty of warning when it's running down. There's a very good range of modes making it suitable for a variety of environments from the busy urban street to full-on dark road riding. Connecting a charger is a bit of a fiddle, mind.

In the same price bracket, the Cateye Volt 400 is well worth a look (I've tested the 300 and the 1600 and both are superb), although the maximum output is quite a bit less, while the Moon LX360 has a much more tightly focused beam that doesn't give a lot of peripheral vision on dark roads.

Good value front light with enough output for most road use, lots of modes and acceptable battery life

Mostly standard but with the added bonus of Lezyne's signature "race mode" which cuts the outputs to just two – low and high – if you don't want to have to cycle through all the others. Nice touch.

Simple stretchy rubber strap does the job and makes switching from one bike to another simple. It doesn't play as nicely with cables if you want to hang the light under your handlebar as some lights, and it's also not rock steady over bumpier tracks.

Survived 5 minutes under a shower without an issue plus a few drizzly rides.

Pretty much as claimed. It's not class-leading in this respect but it's not bad given the output available and the price. The deeply recessed USB charger socket won't win many friends – it's one of the most fiddly lights to charge that I've used.

In the higher power modes there's enough light to go pretty quickly along dark lanes, which is impressive at this price point.

No issues during testing. My previous experience with Lezyne lights suggests its batteries aren't as durable as some (and there's no simple way of replacing them), but it's early days with this one.

It's a decent light for sensible money.

It did a good job for my commute which goes out of town on some darker roads. Impressive illumination for not a whole pile of cash, with acceptable battery life.

The strap doesn't hold it as well as some. The USB socket is fiddly and not compatible with some cables.

It's impressive to get this sort of output from something so small and relatively inexpensive. Yes, the strap mounting isn't my favourite, and the recessed USB socket is annoying, but I reckon this is a good value light with enough output for most road use.