6
10
Versatile light with some nice touches, but overpriced compared with others at this price point
Weight:
195g
Contact:
www.infini.tw
How we test

As its name suggests, the Infini Tron 800 will deliver 800 lumens top whack and it's perfectly adequate for scorching along unlit backroads. It also has a decent spread of constant and flashing options for suburban and town stuff too.

I've been pleasantly surprised by the Tron's solid build, versatility and frugality – especially in the lower modes for use round town. That said, though I've seen it quite heavily discounted online, at full rrp it seems a bit overpriced.

The 10-watt USB headlight is a five-mode, torch-type light. It's CNC machined aluminium throughout, which theoretically gives the diode, switchgear, circuitry and lithium-ion cell a sporting chance of long and productive lives. I've accidentally dropped ours onto a hard, kitchen floor with no obvious signs of trauma.

Conversely, I was surprised to learn that the Tron complies with IPX4 (water spray); to be fair, this should be adequate for general road duties but the Xeccon Spear 900, for example, boasts IPX6.

Either way, it passed my garden hose torture test without missing a beat, and there are plenty of pricier models that also only comply with IPX4.

Its intelligent design – where the light automatically staircases to a lower setting when operating temperatures exceed a certain point – is a welcome feature, though the casing hasn't become remotely warm during testing, even after 90 minutes at top whack, let alone clicked down a setting. Then again, the mercury has been in low single figures for much of the test period.

In keeping with others using this technology, it won't plunge you into glimmer mode when you're hustling along deserted lanes, but it should prevent premature wear and tear on the system.

The lens is well designed, casting a decent spot and peripheral presence, inspiring a bit more confidence at roundabouts and junctions.

Like most torch-type 'commuter plus' models, the Tron employs a best-of-both-worlds spot and flood hybrid beam. Quality of output is good and it produces an extremely broad, pure arc. It lacks the same purity as some pricier fare that I've used on a longer term basis, including Moon's Meteor Storm Pro, but it's more than adequate for backroad scratching.

Given my very rural surroundings and late meanders, 800 lumens upward is my go-to. The super-bright mode permits a steady tempo of 25mph or so along the flat, with ample warning of holes and similar hazards. Beam quality is also passable for bridleways and short sections of forest trail, though think scenic cut-through rather than trail blazing.

Navigational limitations become more apparent when descending at 30mph or so, but in my experience that's not uncommon with this genre of light.

Oncoming traffic seemed to take note from at least 50 metres or so, and as I said above, peripheral bleed was better than I'd expected when emerging from unlit junctions.

Inifini cites two hours' run-time from a full charge, and ours has come within two minutes of this.

Boost mode seems around the 400-lumen mark. This gives plenty of punch for the outskirts of town, especially in the sense of being seen. Same goes for semi-rural stretches, and in relatively clear conditions there's sufficient navigational bite too.

As an experiment, I ran the 400 lumens through the suburbs and even town centres at rush hour. Overkill perhaps, but its output was assertive rather than aggressive. Or at least it didn't seem to infuriate anyone at close quarters and in slow moving traffic.

Again, run-times seem faithful (within a few minutes of the four hours quoted).

The lowest of the three constant settings is adequate for well-lit town centres and shared paths, although a touch impotent for my liking. In these contexts, where it's about being seen rather than seeing with, I've tended to opt for pulsing, which cracks out a decent tempo. Most traffic clocked me at 100 metres, a bit further along unlit roads before dusk.

I've had almost the full 24 hours from it, too, fully juiced.

Neither pulsing nor its flashing counterpart are marketed as daylight modes, and something like the Bontrager 350 RT will blow them into the shade. Nonetheless, both are pretty good in low light.

Flashing is the more frugal; Infini suggests 400 hours, and I've come nowhere near calling its bluff. This means you can run it all day and switch over to the see-with settings when darkness falls without denting reserves.

When it comes to charging, the Tron has a standard micro-USB lead, but it's very short. It might be fine when it's supping from your laptop but isn't very convenient for mains refuelling.

Zero to hero, we're talking a genre-competitive three hours or so. Unusually, constant green denotes charging and it turns clear when fully juiced.

The switch is a small, positive centre-mounted affair, which requires the usual two-second press before engaging, with little chance of accidental engagement in pockets or luggage. Coursing through the modes is done with subsequent single prods.

Despite the small surface area, it's easy enough to operate while wearing winter-weight gloves.

The battery life indicator window has proven very accurate and intuitive. Green denotes full to 50%, orange is 49-25%, and below that it flicks to red.

Giving it a double flick before shutting down confirms reserves, making recharging decisions that bit simpler.

Unlike the Spear 900 and some other budget blasters, which default to a prescribed setting, the Tron features a proper memory function. Power up and you'll start where you left off.

The mount is remarkably similar to the Xeccon Spear 900's, both in terms of design and execution. The light slides atop the channels, locking in place with an audible click.

The spec says the bracket should fit diameters from 19-31.8mm, but it showed serious signs of indigestion with my oversized extension bracket and bar. It will go on 31.8mm bars, but it's a bit of a struggle. No problems with 26mm diameters, but these are becoming increasing obsolete/collectable, depending on your viewpoint. 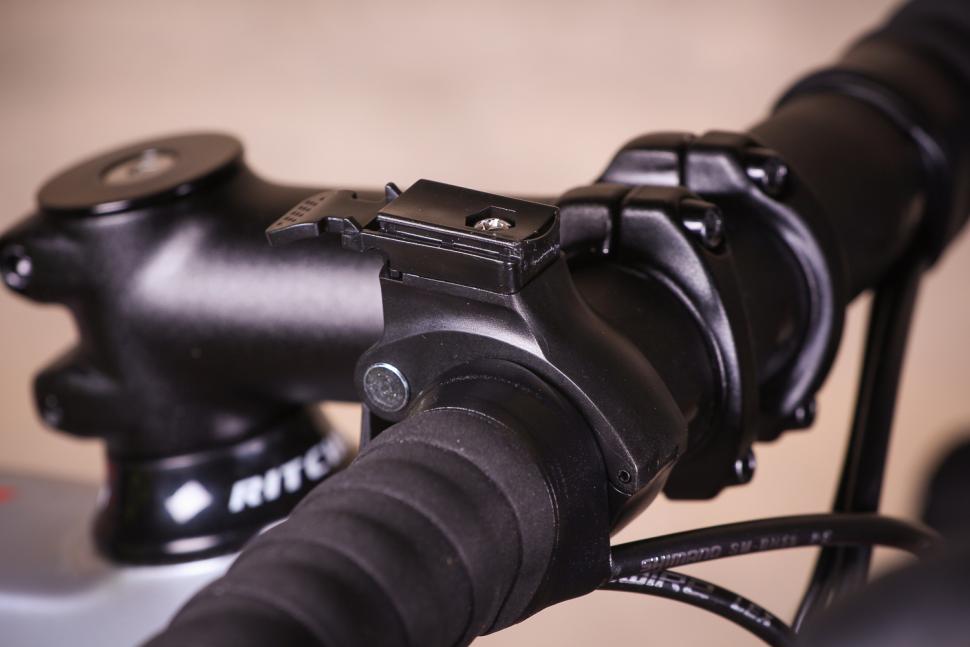 Once locked shut, the bracket is fit for purpose, with no hint of slippage or vibration when tackling poorly surfaced roads and lumpy lanes.

Overall, I've been both pleasantly surprised and slightly disappointed by the Tron's performance. In many respects it's a very capable light with some nice touches. I've seen it discounted to the £70 mark and at this price I'd be tempted to take a closer look.

On the flip side, even allowing for generous run-times and decent settings, the specification isn't as impressive as models giving comparable change from £100, such as the Ravemen PR 1200, or indeed those with much smaller price tags, such as Lezyne's Macro Drive.

Versatile light with some nice touches, but overpriced compared with others at this price point

It's a torch-type light with a sensible range of settings for navigating unlit lanes and for being seen round town.

* Push button switch operation is easy to operate, even with winter gloves

* 2 prong adaptor included for use with action camera mounts

Solid and nicely finished, although mounting bracket is good rather than great.

Intuitive to use, with sensible spread of settings for most riding contexts and a decent blend of power/economy.

Worked well enough but less refined that I might expect from this price point.

Surprisingly good. Extremely faithful to the times cited and recharging times are reasonably swift, relative to other torch-type competition.

Good beam pattern meant 800 lumens was more usable at full pelt and along unlit lanes than I was expecting. Semi-rural and town-friendly modes are pitched correctly too.

A good all-rounder but at full rrp a little steep relative to the spec and other brands.

Overall, the Tron 800 has proven a very capable torch type light. Settings are well suited to riders who want to be seen through built-up areas, yet have enough power for spirited back road fun. Materials are generally good, charge times are equally reasonable. The bracket, though, is good rather than great and the overall spec is less competitive than others of similar price.

A bit pricey, relative to the overall spec.

Would you consider buying the light? Not at full rrp but would consider if discounted.

Would you recommend the light to a friend? In the running, if discounted.

A decent light when all's said and done but it faces fierce competition from more powerful and/or cheaper models.