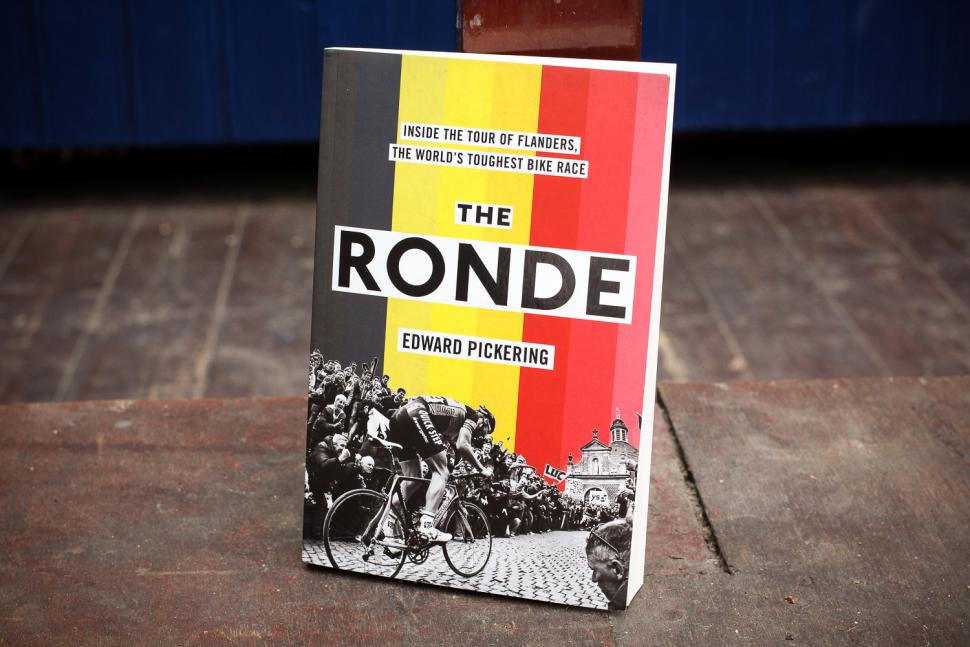 The Ronde by Edward Pickering

8
10
A consummately well-researched history of the event, the region and the people who have made The Ronde what it is
Weight:
419g
Contact:
www.simonandschuster.co.uk

The Ronde is more than a book about a bike race. Part chronological micro-analysis, part travelogue, part love letter, if it were to become the definitive work on the matter for the next century I wouldn't be surprised. It's hard to see what any subsequent author could do but rehash or paraphrase.

The Ronde van Vlaanderen or 'Tour Of Flanders' is the toughest one-day bike race in the world. This is borne out by the fact that no one has ever won it more than three times. No one. Six people have won it three times, eleven twice – while four people have won Le Tour five times. Even Eddy Merckx – unquestionably the greatest competitive cyclist ever – only won The Ronde twice, whilst winning other one-day classics like Milan-San Remo seven times and Liege-Bastogne-Liege five, not to mention equal-topping the multiple-wins charts of Le Tour and the Giro with five apiece.

The Ronde stands alone as a singularly hard nut to crack, a combination of luck, strategy and form needing to come together exactly on cue, on one day early in April. Short of issuing mandatory seal-fat-based embrocation then releasing polar bears onto the course or setting stretches of cobbles on actual fire, it's hard to imagine a worse day out on a bike.

And let's face it – that's why we visit, or watch, or in this case, read. To cycle is to suffer, said someone once. Or indeed anyone, faced with a 30kph block headwind on the run home after 90 miles out in it. But as Pickering dissects, arranges and serves back in minute detail, The Ronde is in another league. Through his sector-by-sector analysis, one gets a muddy, cobbled, gutter-eye-view of each and every change in gradient, surface or wind direction.

Pickering chose the 2011 edition to structure his tale around, starting from the off in the main square of Bruges, heading out into what we learn is a fiendishly complicated region, bestrode by political, religious, economic, geographic and meteorological variations (Pickering makes an almost-identical summary on the last page of the book, which I had not reached before writing the previous sentence – it's the over-arching take-away from the read, that the Vlaamse Ardennen is far more complicated than an outsider would think).

For what is a very small part of Europe, an awful lot has happened to Flanders, in the distant and recent past. At one stage hosting the richest city in the world (Antwerp – don't worry, it's still there, just not as well-off), Flanders has seen its fortunes come and go, reflected in the door-knocking reminiscences of residents whose houses line the famous climbs of The Ronde.

Another recurring theme is that change is ever-present in the region, and indeed in The Ronde itself – shifting starts, finishes and routes making each successive year different from the past, but always drawing on the region's innate geographical structure to make for a cracking day's racing.

Pickering unwraps cycle-race shenanigans of various technical and ethical shades, from welched-upon 300,000-franc bribes, to the fact riders need to go all-out around 100 times over the course to remain in a winning position at the end. That averages at about once every three minutes. Whelp.

For the cycling fan, it's all in there. All of it. Whether you're a keen weekend bimbler or a Cat 2 with fire in your cleats, there's anecdote, statistic and reminiscence aplenty. I'd say a read before any visit to cycle in the region would be well worth it, if for nothing other than a broader appreciation of what could be easily overlooked as a boring bit of Europe to speed through on your way to the Alps.

Much is made of unpacking the 'Flandrian' man-myth – the hallowed ability to ride the legs off your competitors under atrocious conditions, probably to then go long-range solo, win, and not say much about it afterwards. What becomes clear through multiple interviews is that while there is historic basis in the poor-farm-labourer-escaping-one-mud-splattered-destiny-for-another schtick, it's not necessarily inherent in the genes. Of such things are myth made, and we'd be worse off as a global culture to too-brightly illuminate the reality that hard bastards can be and are born all over the place.

I'd say a prerequisite to enjoying The Ronde is a personal love for suffering, or desire to wallow in that of others. An affinity for what the riders over the last century have gone through will be a hand in the small of your back, as Pickering leads you a merry, mucky dance through this surprisingly not-flat bit of western Belgium. You'll crest that hellengen with a better appreciation of what competitors go through in the name of sporting glory and our entertainment.

A consummately well-researched history of the event, the region and the people who have made The Ronde what it is

Make and model: The Ronde by Edward Pickering

It's for fans of bike racing, or the region.

'It wasn't a race but a war game' Bernard Hinault

The Tour of Flanders – known to cycling fans as the Ronde – is the biggest one-day bike race in the world.

It is a potent mix of grit, cobbles, steep climbs, narrow roads, national pride, beer, brutal weather and the maddest, most passionatefans in the sport. It's the Tour de France boiled down into a single day of non-stop action – the Belgian equivalent of the Grand National, Wimbledon and the FA Cup final. And there's yet more to it than that.

Edward Pickering tells the story of the Tour of Flanders, its history, culture and meaning, through the prism of the 2011 Ronde, an incredible edition that was one of the most exciting bike races of the past half-century. He weaves the narrative of that day into a broader study of the race, with eyewitness accounts from the key locations of the Ronde and dozens of interviews with the riders.

The Ronde is a textured portrait of a race, but it also explores the deep links between bike races and the landscape and culture in which they take place, and explains how cycling works, with the most detailed analysis of a single event ever seen."

Ed Pickering is one of the UK's leading cycling writers, having written for a range of publications from Cycling Weekly to the New York Times and Loaded. He is the author of the critically acclaimed The Race Against Time and The Yellow Jersey Club, and the editor of Procycling magazine.

You come away knowing much more about the race and the region than before, likely with the plan to read it again next March.

The anecdotes and learning about the region.

Sometimes Pickering over-eggs the step-by-step leapfrogging coverage, which is what I imagine most people could do without as they probably aren't after the 2011 edition specifically, more a broader appreciation of the race and the location. A decent editing of these bits would have improved readability.

Would you recommend the product to a friend? Yes, if they were into the region or the race, or bike racing in general.

It's mostly a good read, occasionally cracking, occasionally tough going. This is the inevitable nature of a fan's book, written by a fan, for fans. Overall though, it does a very good job of illuminating and educating.