9
10
Despite a couple of minor flaws, the Giant Recon 1600 really impresses with its brightness and competence at such a good price
Weight:
242g
Contact:
www.giant-bicycles.com
How we test

The Giant Recon HL1600 is an excellent value headlight and packs some smart thinking alongside its superbright output. It's not perfect, but it's pretty damn good.

If you're in the market for a bright front light, we've tested a couple of models that can punch up to a hefty 1,600 lumens: Blackburn's very good Countdown 1600, and this Recon 1600.

A quick check of the beam test above shows the differences in the two lights' beam profiles, where the Recon has a wider distribution of its 1,600 potential lumen output but a less focused central portion than its rival, while out on the road it shines a little more downwards towards the road than the more high-beam-like Countdown.

In reality, I found the Countdown gave marginally more clarity when looking 20m-plus down the road, while the Recon gave slightly better peripheral vision across the width of the road closer to me.

In the 1,600-lumen top modes, the Recon outstrips the Countdown by a few minutes in burn-time (1:35hrs versus 1:20hrs), and it seems able to stick to that top mode for longer too. The body naturally gets incredibly hot – too hot to hold for any length of time and it will burn you if you try – but it doesn't power down quite as readily, if at all if it's getting enough cooling in winter air.

That top setting is underpinned by 800lm and 300lm static modes, as well as a 100lm standard flash mode. It's not particularly disruptive, but it does the 'please notice me' job well and will do so for up to 100 hours, according to Giant.

What sets the Recon apart, however, is the smart setting (shared by its lower-powered sibling, the HL900). It's easy to miss it as you scroll through the settings, mistaking it for a simply brighter flash mode, but the normally green indicator around the function button flashes blue to indicate that the ANT+ chip inside is looking for a speed sensor to connect to. 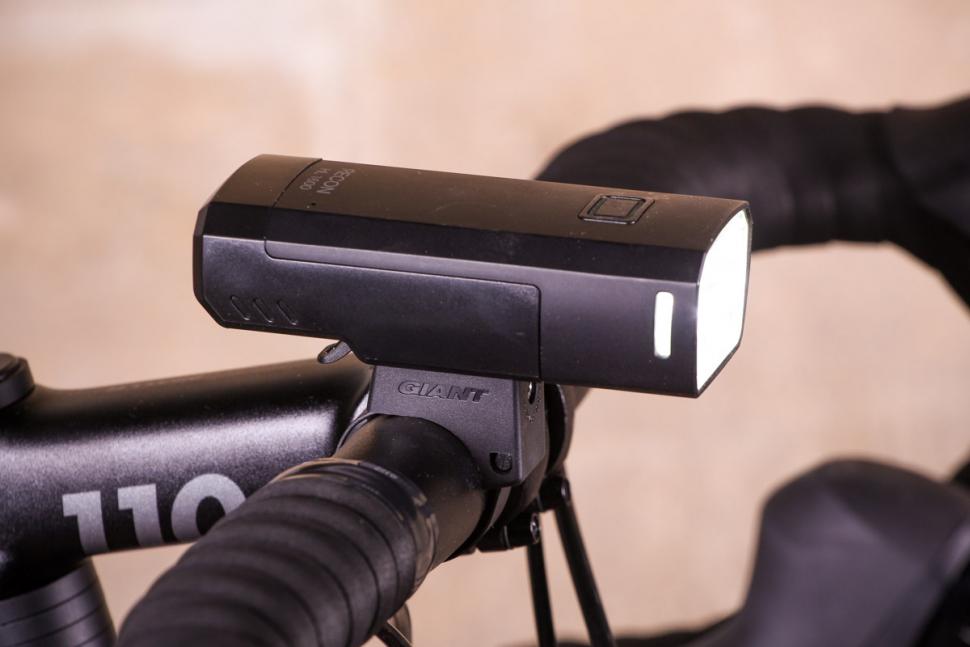 Why? Well, it comes down to something called 'SpeedBeam' technology which receives data from a connected sensor and auto adjusts brightness according to the speed that you're riding. You do need a sensor unit itself – it won't pair to a Garmin or other head unit, for example – but it's definitely a handy little feature that has the potential to save battery life automatically.

If you don't connect it to a sensor, then the smart setting starts basing its choice of mode on ambient light modes. During the day, it sits on an 800lm flash mode, while at night it keeps the beam on with a flash in the background.

Burn-time from the 6000mAh battery is difficult to quantify when modes are automatically changeable, but Giant claims that the 'day flash' will run for up to 50hrs, and the 'night combo' will expire after 4:30hrs. Respectable in anyone's book, given the output.

So it's feature-packed, ticks the major boxes of battery life and has a decent beam to go with the output. Even the bracket is easy to fit and operate, and the overall weight is comparable with its Countdown competitor. So, are there any downsides? 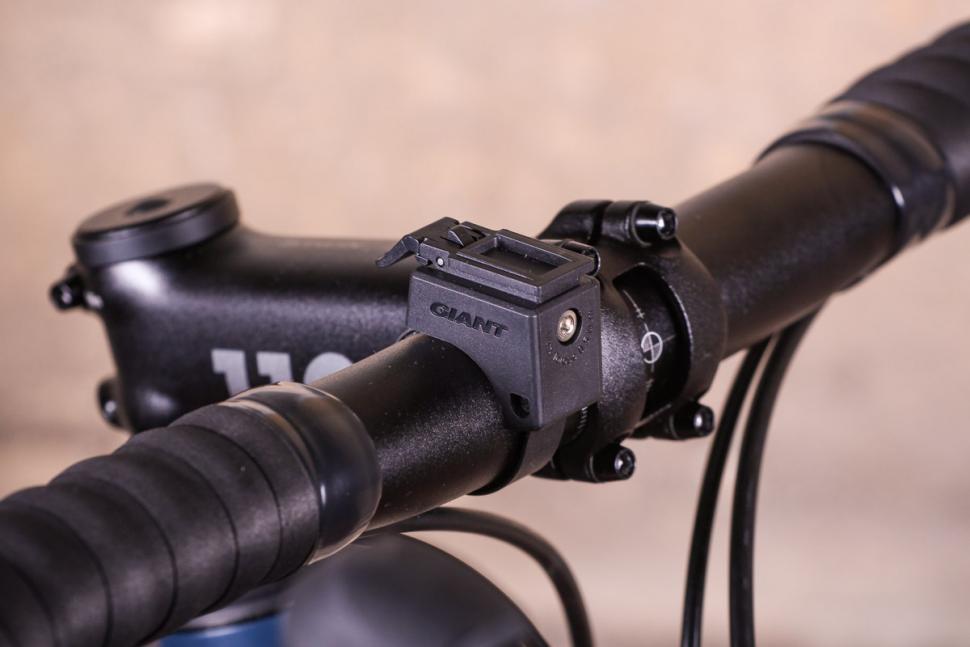 Yes, but nothing that should really put you off. Firstly, the build quality isn't quite at the same level as the Countdown, which is a really nice product to have – and you don't get a screen and three-button operation system.

The Recon operates using a single button on the top of the unit, and that's fine in itself, but it's a cross between a touch panel and a clickable button. That is, you need to press down on it like a button, but it doesn't depress into the unit or feed back at all. It works, even with gloves on, which tells me that it responds to pressure rather than touch, but it really is quite annoying when you press it and nothing happens.

These flaws are minor, though, especially when you factor in the £40 saving over the Countdown. In fact, as far as I'm aware, 1,600 lumens isn't achievable for less, which should automatically mean that this light gets your strong consideration if you have £100 to spend on a heavy-duty front light without the extra gubbins of a power pack.

Despite a couple of minor flaws, the Giant Recon 1600 really impresses with its brightness and competence at such a good price

Giant says: "SMARTER SEEING. Aside from the outstanding light output and industry-leading usage time, the Recon HL1600 and Recon HL900 increase the SpeedBeam technology, which adjusts light beam output based on riding speed; also features a light sensor to monitor ambient light source to change light output; these features help save battery power for when you need it. Brighter, longer and smarter."

The USB cap on the underside is good quality, as is the fitting.

The functionality is fine, but the button is annoying enough to strike a couple of marks.

Easy to use and fit – simple plastic construction.

Slightly favourable in comparison to its 1,600-lumen rival, the Blackburn Countdown, and charges in good time too.

It's hard to fault, especially with the smart mode.

Build quality is good all round.

About the same as the Blackburn Countdown, which I also awarded a 6.

It's £40 less than its direct performance rival, the Blackburn Countdown. The Cateye Volt 1700 is even more again.

It might perform to ostensibly the same levels as its competitor, the Blackburn Countdown, but it also has handy smart features that set it apart, as well as greater stickability at the high brightness settings. Despite the small flaws, it earns its 9/10 I'd say.