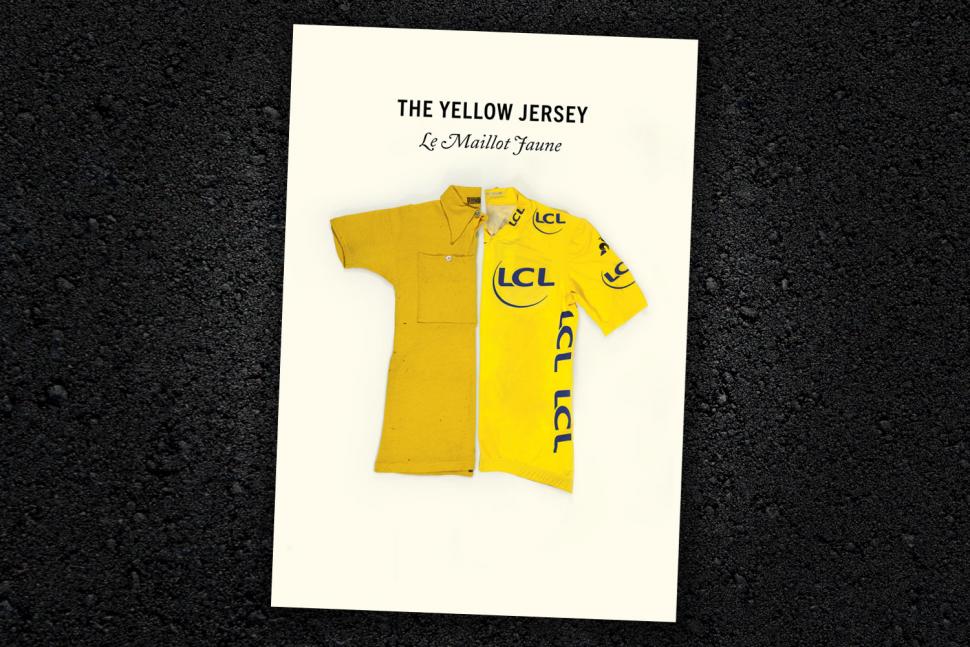 The Yellow Jersey by Peter Cossins

8
10
Yet another book about the Tour de France, from yet another new angle
Weight:
880g
Contact:
www.penguin.co.uk
How we test

I doubt that many people have explored the history of the best-known symbol of the world's best-known cycle race more than Peter Cossins. As you might expect, The Yellow Jersey is a thorough history of the garment and what it represents, but also a great prompt to discuss so many other aspects of the Tour de France, some familiar and expected, some less so.

The Tour de France seems to attract writers looking for niche aspects of the sport to explore, such as we saw recently with 'maps of Le Tour'. Peter Cossins is another author on a similar mission: having already made a success of focusing on one particular mountain, he has now turned his attention to something else that is inextricably linked to Le Tour: the yellow jersey.

We all know that being 'in yellow' is a mark of cycling success (because you hold the overall lead of the most important cycle race in the world), and as a result it is used by various cycle-orientated companies to associate themselves with such a quality: from cycle-specific insurance, through numerous bike shops, to the publishers of the book under review, it is a convenient shorthand for excellence.

However, it has not always been that way. Cossins gives us a thorough history of the garment, but also uses 'the yellow jumper' (© Ned Boulting) as a springboard for numerous other Tour-related anecdotes, and as an opportunity to discuss various controversies and myths.

Cossins achieves this through numerous interviews with relevant parties, drawn from a wide range of those connected to the sport; he really has accumulated an impressive list of contacts from his years of writing about cycling. There is also a small but relevant bibliography, which has provided me with a short list of other books that I should seek out.

We might find it hard to believe today, but the idea of having a special jersey for the race leader was not welcomed by the riders initially, and certainly not in yellow – that being the colour of Judas, of cowardice, and of prostitution, amongst many other undesirable associations. 'The general antipathy towards the colour yellow...was transformed by its significance within sport and by the Tour in particular.'

There have been other books about cycling jerseys recently, and naturally the yellow jersey has featured in them, albeit with little agreement as to why yellow was the chosen colour: Cycling Jerseys and The Cycling Jersey suggested several possibilities between them, but as far as Cossins is concerned 'it is generally accepted that it was chosen because of the publicity boost it could give to the organising newspaper', L'Auto, which was printed on yellow paper.

Cossins could have skipped over the Lance Armstrong years, as the official results show his name with a line through it and therefore no final yellow jersey holder, but 'rubbing out memories of his performance is not so easy'. Fortunately it gives Cossins the chance to tell the story of him receiving a phone call from Armstrong, in which the latter assured the former that: 'I'm not going to give you any fucking quotes, Peter.' Yep, that sounds like the sort of bullying that we now associate with Armstrong.

There are many stories that I hadn't heard before, such as the one about race leader Louison Bobet refusing to wear the yellow jersey because it contained too much synthetic fibre from jersey sponsor Sofil; or the suicidal thoughts of Michael Rasmussen when flying home after being withdrawn from the race by his team when in the lead: 'I'm going to go up into the cockpit and knock out the pilot and I'll take down Rabobank's plane. I though that would make us even.'

Cossins lists all 16 riders who have left the race while wearing the jersey, and it is injury that accounts for most of them. Only Michel Pollentier joins Rasmussen in the less noble category of lying or cheating, with sunstroke being another of the more unusual reasons.

The chapter about 'Etiquette and unwritten rules' is particularly relevant to some recent races, where cycling's 'extensive and occasionally bizarre ethical codes' are ignored. Whatever rules the peloton agree on at the time, it seems that you really need a 'patron' to impose them, and I suspect that a lack of such a clear leader makes controversial decisions to ignore the rules more likely.

There is an interesting discussion about the changing nature of the type of rider that is most suited to win Le Tour: obviously it will be heavily dependent on the course, but (bearing in mind that this book was published before this year's Tour) Cossins shows great foresight in concluding that: 'Bernal may prove to be the rider who proves...naysayers wrong about the demise of the pure climber at the Tour.'

There is another timely chapter about the ASO's continued unwillingness to offer a worthwhile event for women, and some great interviews with several riders who have been active in lobbying for (or riding in) such an event. As we now know, things won't be any better for next year. Maybe the answer is to build up the status of one of the other stage races for women, rather than trying to force an unwilling entity to change 'Course' (see what I did there?)

Just as the prose is about so much more than the yellow jersey, the pictures are more varied than different shades of yellow tops – although there are a few of those: musical scores, adverts, posters, newspapers, and magazines sit alongside numerous glossy images of racing through the years.

Cossins has done a great job of tying together many aspects of Le Tour under the one central theme of the yellow jersey, resulting in an enjoyable, informative, readable, and alternative look at Le Tour – supported by a wide range of relevant images in a beautifully presented book.

Yet another book about the Tour de France, from yet another new angle

Make and model: The Yellow Jersey by Peter Cossins

In 2019, the cycling world will celebrate the 100th anniversary of sport's most iconic and distinguished prize: the Yellow Jersey. Beautifully produced and packed full of interviews with riders such as Chris Froome, Thomas Voeckler and the oldest living wearer of the Yellow Jersey at 94, Antonin Rolland, The Yellow Jersey is a fitting celebration of the 'maillot jaune'.

In 1919 the leading rider was first instructed to wear the Yellow Jersey, following a campaign from fans and journalists who were struggling to identify the winning rider. 100 years on, the jersey has passed into almost sacred status. You'll never see an amateur rider wearing yellow - it is reserved purely for those who have sacrificed themselves in the world's greatest race.

Cossins will take the reader on a journey to the origins of the jersey and its early winners. He'll explore the effect of wearing yellow as a motivator and occasionally as a curse. Beautifully produced with original photography, The Yellow Jersey is an exquisite tribute to the greatest trophy in sport.

It is rare to comment on this aspect of a book, but this one really is beautifully presented.

At full price it is quite expensive for a hardback of this size, although this is partly redeemed by a sumptuous presentation; readily available on offer though.

Makes you think about parts of Le Tour that don't normally feature in other coverage.

It's out of date already, and is only going to become more so.

I feel that Cossins has done a very good job of fulfilling his mission to reveal more about the jersey than you ever thought possible.