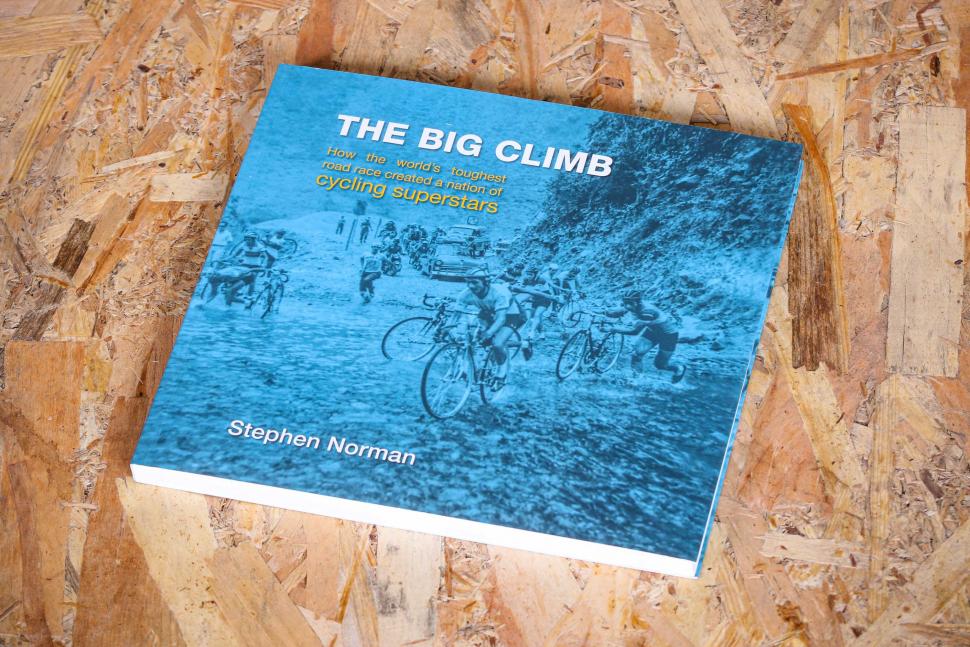 The Big Climb by Stephen Norman

Colombians have had success at the highest levels of road racing recently, so what better time to learn more about the nation and its cycling? The Big Climb by Stephen Norman reveals the parts played by the country's main race, its terrain, and the drugs – all supported by some rare and compelling images.

You would be forgiven for thinking that The Big Climb was all about the Vuelta a Colombia (Tour of Colombia) cycle race, not least because the cover promises to show 'How the world's toughest road race created a nation of cycling superstars'. Inside, too, the chapters work their way through the race's highlights from 1951 to the present, appearing to reinforce that idea.

However, I suspect that would make the book of limited interest to most people outside Colombia, including me, because let's face it, only real enthusiasts make the effort to follow the race.

Fortunately, Norman soon reveals that The Big Climb has a broader remit, to "tell the story of Colombia's love affair with bike racing", in an attempt to explain why "Colombians are out-performing the rest of Latin America combined". Essentially, the history of the race is used as the basis for a fuller discussion about cycling in Colombia.

While that increases the book's appeal, there is something else that could well be its main attraction: the pictures. You may never have heard of the climbs or riders featured, but the images are as evocative as any you will see elsewhere. This aspect reminded me of the books from the Horton Collection, showing some brutal conditions for racing in the early years: as if the road surfaces were not challenging enough, there seem to be a considerable number of rivers to be forded as well.

The timing of this book is appropriate, it being the year that Colombia became the 10th country to have won all three European Grand Tours (and only the second from outside Europe), with Egan Bernal's win in France completing the set.

Norman is not alone in recognising the current interest in Colombian cycling, with Matt Rendell's more detailed history due out early next year; that appears to be a follow-up to his Kings of the Mountains title, which Norman recommends if "you crave more detail, more political context, more oomph".

Back to the big question: why has Colombia produced a disproportionate number of successful cyclists? Having a successful domestic race like the Vuelta a Colombia is a major factor "that led the Colombian people to their love affair with cycling". If a Colombian rider wants to do well in his home race then he needs to be a good climber – and that same strength stands them in good stead for those WorldTour races that favour climbing ability.

It was in 1983 that we got to see Colombian cyclists competing seriously on the world stage, when "the organisers of the Tour de France opened the race to amateurs, hoping to attract some Eastern European teams. Instead they got Colombians". Not long afterwards, some top European riders started a trend of racing in Colombia, as "it was perfect for European riders who wanted to train at altitude early in the season": however, the race in question was normally a competing event to the Vuelta, the Clásico RCN, which was run at a more suitable time of the year.

You can't talk about cycle racing these days without some mention of performance-enhancing drugs – and Colombia's case recreational drugs also feature. We have previously mentioned the involvement of the Escobar family in the sport, and it seems that profits from trading in cocaine supported many teams: "the drug lords...had been brought up on the glory of road racing. So they were cycling fans. Sponsoring a cycle team was a cool thing to do with your money."

On the performance enhancing side, Norman reports that "the records of Colombian road racing from 1998 until 2015 shows that doping was not tackled with the same vigour as it (eventually) was in Europe". Take the example of the 2006 edition of the race: "on the eve of the start, blood tests showed that over half of the contestants had red blood cell counts exceeding 50%. Normally an athlete with such a high count would be suspended, under suspicion of using EPO. After frantic discussion, the failure mark was moved to 60% and the samples were destroyed!"

Unfortunately, it seems that the only time the Vuelta a Colombia is deemed newsworthy outside Colombia is still for similar matters.

Norman covers a lot of ground in The Big Climb, within not many pages; with those fascinating pictures taking up a lot of the space, don't expect too much detail on any one topic. However, he partly makes up for this with QR codes scattered throughout the book, each of which leads to a short video clip that expands on a subject. Less successful for me were the pages given over to brief descriptions of the regions (or departments) of Colombia, which came across as having been written by the local tourist information office.

Make and model: The Big Climb: how the world's toughest road race created a nation of cycling superstars

From Smiths Hall: "A richly illustrated, full colour book which traces the history of Colombian cycling from the 1950s to the present day. It explains how the Vuelta a Colombia, a punishing 3 week race across the Andes, came to grip the psyche of the Colombian nation and create some of the finest cyclists the world has yet seen. The book features 134 old photographs by Horacio Gil Ochoa, as well as numerous maps and diagrams. The book has 168 full colour pages within a laminated card cover and durable stitched binding."

The pictures. And the flipbook-style image of a cyclist climbing in the corner of the page.

Some parts just didn't interest me, and took up valuable space.

It's about time we had another look at Colombian cycling, and The Big Climb gives wide-ranging but brief coverage of the factors that have contributed to their racing success. However, I feel that the splendid images deserve equal billing.