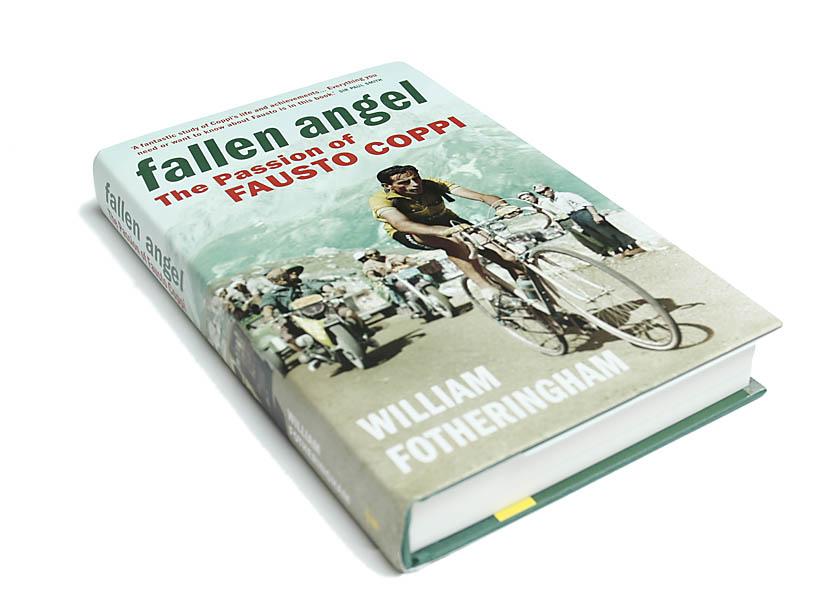 Rather than just concentrate on the palmares of Italy's greatest cycling hero, greatest sporting hero even, William Fotheringham's new book, Fallen Angel tackles Fausto Coppi's whole life, a life seemingly dogged by tragedy and conflict, from being born into a poor farming family to his premature death from malaria 40 years later to give a broad understanding of the man, the legend, and the myth.

It is the classic tale of a boy turning to cycling to escape the impoverished existence of subsistence farming, restoring an unloved rusty bike to ridable condition, pedalling to and from work in town, and taking the "long way round" on his butcher's-boy deliveries, the inauspicious start to the training for his future career.

As Fotheringham recounts, aged only 20 Coppi leapt from obscurity during his first attempt at the Giro D'Italia in 1940 when he pulled on the leaders pink jersey and held onto it till the finish. This victory was the beginning of Fausto's relationship with Gino Bartali, his team leader who begrudgingly had to turn gregario for the new upstart. It was both a friendship and a rivalry, and it would last for over 15 years and divide a whole country, a conflict that went beyond mere bicycles. Bartali was conservative, had overt religious belief, was hard as nails, and represented the "old guard" of cycling, while Coppi was depicted as the atheist (even though he wasn't), artistic, hard to pin down, fragile and keen to drag cycling into the modern era.

It was a soap-opera that gripped Italy for years and makes any Armstrong/(Insert name here) feud seem like a playground spat. It was a partnership that was financially beneficial to race promoters, bicycle manufacturers, newspapers and obviously to the protagonists, and the two would knowingly play up to the rivalry by never referring to each other by name but by the terms “that one” and “the other one”. Sometimes having to work together on behalf of the Italian National team, where their bickering prompted the president to ask that they unite on behalf of Italy.

As Italy emerged from not just the Second World War but also its bitter and deep civil war her poverty stricken people were reliant on bikes, and so professional cyclists took on an enormous significance. As the country tried to drag itself up by its toestraps Coppi was seen as an inspirational figurehead. The campionissimo used the rubble of the war as a launch-pad to invent modern cycling; using diet to improve his performance, practise radical for the time methods of training - intervals, motor-pacing, timed climbs, experimenting with bike set-up and equipment, Coppi turned cycling from a sport where pure brute strength could win to one of intelligence, preparation and technical savvy. He also honed the relationship between leader and gregario to a fine art, aspects of which are still alive today.

It was the combination of all these factors that saw Coppi, collect world titles and world records, achieve countless trademark breakaway solo victories, win the Giro five times, and complete what was thought to be impossible, cycling's great double of winning the Tour de France and Giro D'Italia in the same year, an achievement he managed twice.

Despite his apparent strengths on a bike Fausto was a frail man, a trait brought to the fore when his brother Serse died in 1951 after a minor crash in Turin. Coppi had persuaded his younger brother to race with him so he could be by his side, and then secured him a place in his Bianchi team so they weren't apart. A totally different character to his brother Serse was a fun and party loving womaniser, as opposed to Coppi's almost monastic lifestyle. But the campionissimo needed his brother not just for support out on the road, but as a psychological crutch, the man that could give Fausto the constant reassurance and security he required, his lucky charm. His brother's early death had a profound effect on Coppi and is almost the catalyst for when things started to go wrong in his life.

Coppi notoriously had an affair with Giulia Locatelli, a fan that became a lover, referred to very seldom by her name, but more simply and detachedly as the "White Lady", the woman Coppi left Bruna and Marina, his wife and daughter for, a woman he later had son Faustino with. The newspapers ate up the scandal of their hero as the relationship became public, very public. Italy was still a deeply Catholic country where adultery was punishable by prison and so once again Coppi became a figurehead for a modernising Italy, but this time one that was slowly starting to drift away from the firm grip of the church. It was a liaison so infamous and so influential to the nation that the Vatican intervened and asked the cyclist to return to his wife.

It is a mark of the mans status that Coppi the campionissimo is still talked about 50 years after his death. Rather than watch the star slowly fade into podgy old-age his early and predictably controversial death has preserved the legend, the cycling genius battered and bruised by the real world.

Fotheringham writes in a fast easy-to-read style, and that's not in any way a criticism. The book doesn't get bogged down in tedious race descriptions or litanies of results, any race talk embellishes the story, pushes it along and always leans towards the personal with plenty of local colour included to illuminate the way. It's a fascinating insight to a time when the effects of cycling ran far deeper than we can ever imagine, fans were fervently passionate, and Coppis racing and private life were deeply woven and influential into the consciousness of both his country and cycling.

The story is presented as impartially as possible, leaving interviews with the mans family and cycling counterparts to provide the insight on this great but flawed man. Fallen Angel isn't just a great biography, it's a fantastic story.

The mythical Coppi story told for the first time for the English reader.

It didn't last long at all, a real page-turner

Books are so expensive these days aren't they?

It taught me a lot of things I didn't know

I've been riding for: Over 20 years  I ride: As much as I can  I would class myself as: Experienced

I regularly do the following types of riding: road, cyclo-cross and mountainbike just riding around, sometimes fast, sometimes with lots of stops for cake. Mountainbike and cyclo-cross racing, the odd evening road crit. Far too much singlespeed for my own good