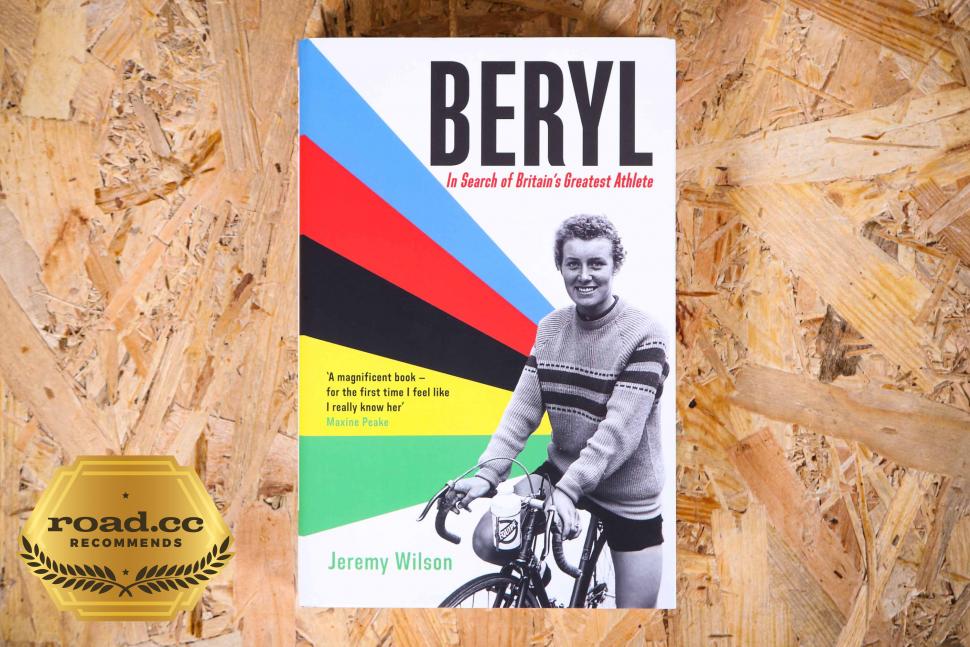 It's not controversial to say that Beryl Burton was one of the most dominant athletes of all time – of either sex. If you didn't hold that view already, reading Beryl – In Search of Britain's Greatest Athlete should soon convince you. It is also true to say that her achievements rarely received the recognition they deserve – until now, perhaps. Only three years after a previous profile here's another one, although Jeremy Wilson extends the remit of a conventional biography to explore other aspects of Burton's incomparable cycling career.

Last time I wrote a review about a biography of Beryl Burton (which is not something you get to say very often), I questioned why it had taken so long for one to appear; now I am wondering why we have another one already!

The previous book was William Fotheringham's The Greatest, which I said gave 'one of the most dominant cyclists of all time...the biography she deserves.' Wilson is obviously aware of Fotheringham's work, as it is listed in his bibliography, so is there anything to be gained from his one?

There certainly is. Obviously both books have to cover some of the same ground, but each does it in his own style, and focuses on different things.

As an example, at 15 pages Wilson devotes three times as much space to Burton's only 24-hour time trial as Fotheringham, who in turn wrote twice as much about it as Burton did in her autobiography, Personal Best. Having previously also beaten the men's record while setting the women's record in a 12-hour time trial, Burton was attempting the same unparalleled feat in a 24-hour event. While the former is probably her career-defining result, the latter ended in failure – yet it was just as interesting and was worth every page.

In my previous review I also mentioned that it's always hard to compare performances across different eras; however, in a prime example of what makes this book so different to a more conventional biography, Wilson has actually done exactly that.

It's a highlight of the book for me, and could make it a definitive reference work in future debates. In a self-explanatory chapter called Just how fast was she?, Wilson goes to a wind tunnel and measures the performance of a rider using Burton's original equipment and riding position, and then compares this with the same rider using everything from the modern era. It was not a surprise to discover that Burton would go considerably faster with today's kit, but the real benefit of the test is to predict with considerable confidence that she would still hold the women's record for every standard distance – except for one, the 10-mile time trial. Even then her record stood for 43 years at this very popular distance.

Bear in mind that this only covers those aspects that could be measured reliably: Burton didn't benefit from the advances in other areas that help today's riders, such as training and nutrition. In addition, 'course conditions, notably road surfaces and traffic, throw up further possible advantages that can never be precisely measured'.

Wilson concludes that, 'Technology has progressed beyond the records that Beryl Burton set. Other athletes...have not.' Many people will have suspected as much, and here is the proof.

Just as Fotheringham was impressively thorough with his research, so was Wilson – and he even managed to access some 'previously unseen correspondence and photographs'.

Both authors have input from family members, friends, and fellow competitors, as you would expect – and the obligatory cycling dignitaries such as Bradley Wiggins and Chris Boardman are referenced. Wilson springs a few surprises beyond that, with Geoffrey Boycott making an appearance in support of all things Yorkshire – and (presumably drawing on Wilson's main job as the chief sports reporter for the Daily Telegraph), jockey AP McCoy adds comment.

Similarly, there is some explanation of life behind the Iron Curtain, and how 'an ingrained doping system inside Russia' is likely to have 'unfairly denied [Burton] further world titles'. It's not just about Burton, but also about the era in which she was operating.

There is one other notable difference between the two books: Fotheringham's is self-published, which can restrict availability – although by involving Amazon that will now be less of an issue. Wilson takes the more traditional route, using a major publisher, with the associated improvements in marketing and distribution.

In my view there is enough difference between both books to make a case for each – or even all three if you include Burton's autobiography. Whether that is enough to persuade anyone to own more than one of them is less certain, except perhaps for the most fervent fan.

An unexpectedly welcome addition to the BB story, helping to raise awareness of her achievements – again

Make and model: Beryl In Search of Britain's Greatest Athlete

The remarkable life of champion cyclist Beryl Burton, one of the greatest cyclists of all time

Cyclist Beryl Burton - also known as BB - dominated her sport much as her male contemporary Eddy Merckx, but with a longevity that surpasses even sporting legends like Muhammad Ali, Serena Williams and Sir Steve Redgrave.

She was practically invincible in time trials, finishing as Best All-Rounder for 25 consecutive years and setting a world record in 1967 for the distance covered in 12 hours that beat the men. She won multiple world titles, even when the distances didn't play to her strengths. But her achievements were limited by discrimination from the cycling authorities, and by her strictly amateur status against state-sponsored rivals from Eastern Bloc nations.

Yet she carried on winning, beating men and - infamously - competing against her own daughter, while working on a farm and running a household. Her motivation, sparked by appalling childhood illness, is as fascinating as her achievements are stunning.

With access to previously unseen correspondence and photographs, and through extensive interviews with family, friends, rivals and fellow giants from across sport, acclaimed journalist Jeremy Wilson peels back the layers to reveal one of the most complex, enigmatic and compelling characters in cycling history.

For the first time, he also provides the jaw-dropping answer to how fast she would still be on modern cycling technology.

Long ignored by sporting history, Burton's life story - recently told by Maxine Peake in a stage and radio play - is finally getting the recognition she deserves.

The success in seeking out new angles to an old story.

Wilson has to mostly draw from a limited and well-used pool of images.

Despite the inevitable similarities to another Burton biography, there is enough new material here for it to be an equally compelling proposition – so the same score is justified.