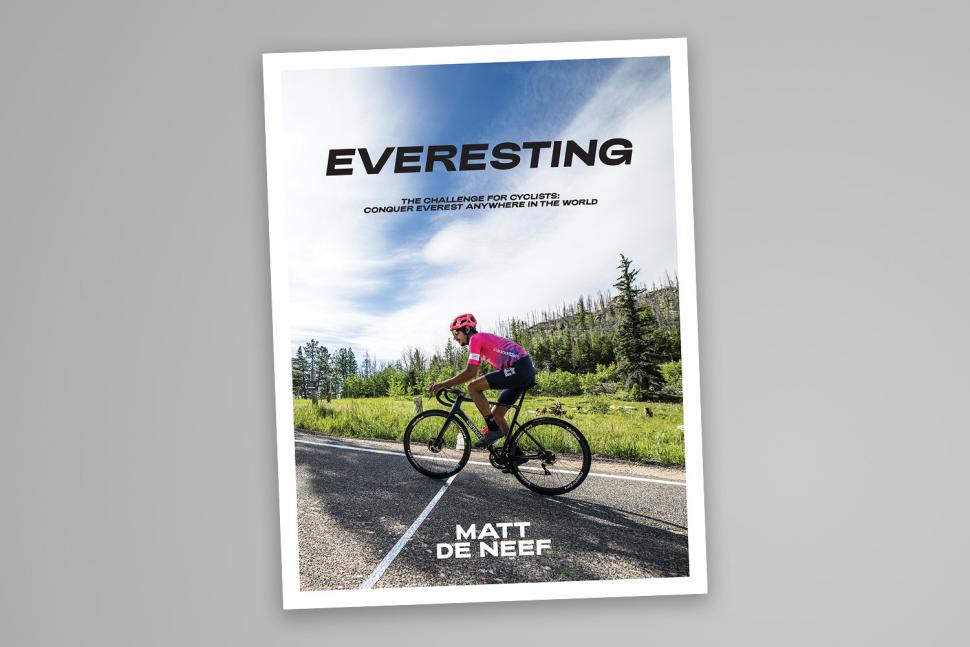 Everesting - The Challenge for Cyclists: Conquer Everest Anywhere in the World

8
10
Explains the unusual history of the Everesting movement, and the stories of some who have attempted the fearsome challenge
Great account of Everesting's history and an Everester's achievements
Some unrelated pictures
Already out of date
Weight:
990g
Contact:
www.hardiegrant.com
How we test

Everesting (the book) is a great introduction to Everesting (the activity). If you've ever wondered about how and why it even exists, Everesting - The Challenge for Cyclists: Conquer Everest Anywhere in the World is a good place to start. If you want to understand how and why others have had a go (and the many and varied ways they have done so), there are some great examples here. As an added bonus, you can read in detail about author Matt de Neef's own attempt.

If you didn't know, the concept of Everesting requires that the equivalent height of Mount Everest be ridden on the same stretch of road in one continuous period without sleep. It sounds simple – although apparently China and Tibet couldn't agree (amongst other things) on what the official height was until last year. It's now 29,032 feet, or 8,844.48 metres.

Like many cyclists I look forward to cycling up hills, although these days I do it for pleasure rather than competition. It is rarely possible to make it type 1 fun (where it is enjoyable at the time) – but the challenge of Everesting almost guarantees that it will be type 2 fun at best (where you enjoy the achievement only in retrospect).

Everesting has become so well known that de Neef has taken the opportunity to become the first (and possibly only) person to produce a book dedicated to the subject. It was produced with 'the enthusiastic support and energy of Andy van Bergen', the man who 'helped usher in a phenomenon that, in the years that followed, would take the cycling world by storm'.

There is a website dedicated to recording all the 'official' attempts that people have made to complete the challenge – a bit like another cyclists' favourite, the Cape Wrath Fellowship, just with added technology and a great deal more popularity. 'Official' simply means that certain rules have been followed and the attempt has been verified; it doesn't mean that the UCI or any other organisation is involved – although they might well be watching with interest.

De Neef describes the history of Everesting, and, as you might expect, the challenge did not arrive as a fully formed concept. When van Bergen set out the rules, it was merely his latest method of 'concocting obscenely tough rides to test his and his friends' limits'. There is a distinct Australian slant to the story (because that's where the main protagonists live), but at least it means things are on the 'correct' side of the road in many images – even if some of those pictures seem to be space fillers with no real connection to the text.

The idea of 'Mt. Everest in a day' wasn't new, and indeed van Bergen took inspiration from George Mallory's exploits in 1994 (as Max Leonard described in Higher Calling). De Neef tells of François Siohan who completed 'the earliest documented ride' in 1984, but accepts that 'it's possible the concept goes back further than that'. If someone did try earlier, the technology available at the time would have made it far harder to record.

While the book gives some useful advice on tackling your own Everest, I wouldn't say that it was reason enough to buy the book; in fact, de Neef himself suggests the 'Official Everesting Discussion Group' on Facebook as a better source of ideas and advice.

De Neef's own preparation and attempt at Everesting is covered, and it is a remarkably compelling story. I doubt that you will find many Everesting efforts described quite as well or in such detail, and I am sure it would be beneficial for any aspiring Everester to read, to give a better understanding of what awaits – although it might just convince you that it isn't such a good idea after all. Or is that just me?

De Neef covers many other Everesting stories, too, including many of those that have set a record for the quickest time to achieve the challenge. It has tended to be only those record-breaking rides that are covered by media (including road.cc), but I found it more interesting to read of other attempts that would undoubtedly be classified as type 3 fun (ie not enjoyable at any time, but they sure do make for a good yarn): those undertaken in seriously adverse circumstances, or even the failures.

There has been a flurry of record breaking over the last year as restrictions on travel and competition meant that riders of all abilities looked for alternative ways to challenge themselves. Unfortunately for her, the current female record holder Illi Gardner missed the print deadline – but that is always going to be the downside of a physical publication.

It wasn't long before people started trying to make the challenge even harder than necessary, with unicycles, BMX bikes, fixed wheel bikes, child trailers, and tandems all getting involved. There was also 'a 14.5-kilogram Raleigh Chopper – a fold-up children's bike with tiny wheels', which doesn't match my understanding of the Chopper. Perhaps the punctuation is at fault, and there are two separate bikes being described?

If you don't have access to one of those, how about performing a wheelie for the whole thing? Incredibly, it has been done, although the ride has never been submitted for official verification.

For some, one single Everesting isn't enough, so there have been many continuous doubles and even triples; if you plan to have a go yourself, just accept that your achievement might not be recognised as anything special because there have already been two successful quadruple Everestings. Bonkers, but inevitable.

> 10 top tips for cyclists to get faster up hills

You might be thinking that you can make a name for yourself by simply doing more regular Everestings than anyone else. Jono Egan is currently the man to beat, with 100 successful attempts – although 'only' 88 of them were outdoors. The rest were virtual Everestings ridden indoors, a relatively new category whose arrival was only made possible in the first instance by developments on the Zwift platform.

I found this to be one of the most interesting parts of the book, mainly because there were so many stories that were rarely (if ever) covered elsewhere.

Runners are now heavily involved, with back-country skiing and freediving success already achieved – and in-line skates and rollerskis 'in the works'. Where will it end? Van Bergen says, 'I don't want to turn Everesting into something you can achieve by bouncing up on a beach ball.' You can (and should) still do it that way if you want to, it just means that you won't make it into his 'Hall of Fame'. Does that really matter?

I wasn't aware of the extent and variety of the Everesting movement, because not everyone is going to achieve the sort of newsworthy record that is given coverage. I still may not want to try one myself, but I now have a better understanding of what's involved – and its appeal.

Explains the unusual history of the Everesting movement, and the stories of some who have attempted the fearsome challenge

Make and model: Everesting - The Challenge for Cyclists: Conquer Everest Anywhere in the World

Everesting explores the extreme personal challenge that has gripped cyclists all around the world: cycling the height of Mt Everest (8848 metres) by ascending and descending a single hill or mountain continuously, without breaking to sleep. All you need to complete this great feat is a hill to climb.

Matt de Neef chronicles the rise of this challenge as he attempts his own Everesting – uncovering its many obstacles, giving insight into training and testing your limits, and celebrating those who have completed the challenge.

Everesting is phenomenally difficult for the rider, both physically and mentally, but can be completed almost anywhere. What started as a small grassroots challenge, tried by just a handful of hardy recreational riders, has now exploded into a global phenomenon. More than 10,000 Everestings have been completed in more than 100 countries, by both Tour de France winners and World Champion cyclists, as well as thousands of ordinary men and women. Jens Voigt, 17-time Tour de France competitor, described his Everesting as: 'One of the toughest things I have done in my life'.

Nearly anyone can appreciate the challenge of climbing the equivalent of the world's highest mountain. With Everesting, Matt takes you into the heart of the challenge. Be inspired and learn how it's done from those who have attempted it before.

It gives you a fuller understanding of an increasingly popular activity.

Some odd images that made no sense.

Sufficient pages and pictures to make it above average value for a hardback.

There is so much more to the Everesting movement than I expected, and I am pleased that someone has documented the story of where we're at and how we got here.