8
10
Superbright light that gets attention without burning eyes or your bank balance
Very bright, but kind on the eyes
Versatile mount
Easy to use
Run-times shorter than claimed
Rotating mount could be better
Weight:
36g
Contact:
www.i-ride.co.uk
How we test

The Gemini Juno 100 is a simple, easy to use rear light with few frills, but it does pack some useful features, including a 30 COB LED lighting array that's super-bright without melting eyeballs, and a clip mount that allows it to be attached on or off the bike in a variety of ways. A couple of niggles with the mount, and the run-times aren't up to claims, but otherwise this is a top performer.

High-powered rear lights can be useful for getting attention from passing motorists, but often they can be blinding, even in lower power modes. Having an StVZO-certified light can prevent this; even adjusting the angle of a rear light can help. Gemini's Juno 100 packs a whopping 30 LEDs on a chip-on-board (COB) configuration, which Gemini says 'emits a soft, more diffused light that is easier on the eyes'.

Sadly, I wasn't able to flag down any drivers during my testing period to find out if it works, so instead I simply looked directly at the light in each brightness mode from behind the bike to see what it might be like for a rider following you, for instance when you're on a group ride.

Though I wouldn't say looking at the light in any of the modes was a pleasant experience, it didn't cause me temporary blindness like some lights have done in the past – even in the highest 100-lumen flashing mode.

The oval arrangement of LEDS gives the light a distinctive shape that certainly stands out from the usual lighting crowd, and thanks to the ability to rotate around its base 90 degrees, it can be orientated either in line with your seatpost, or perpendicular to it (more on this later). 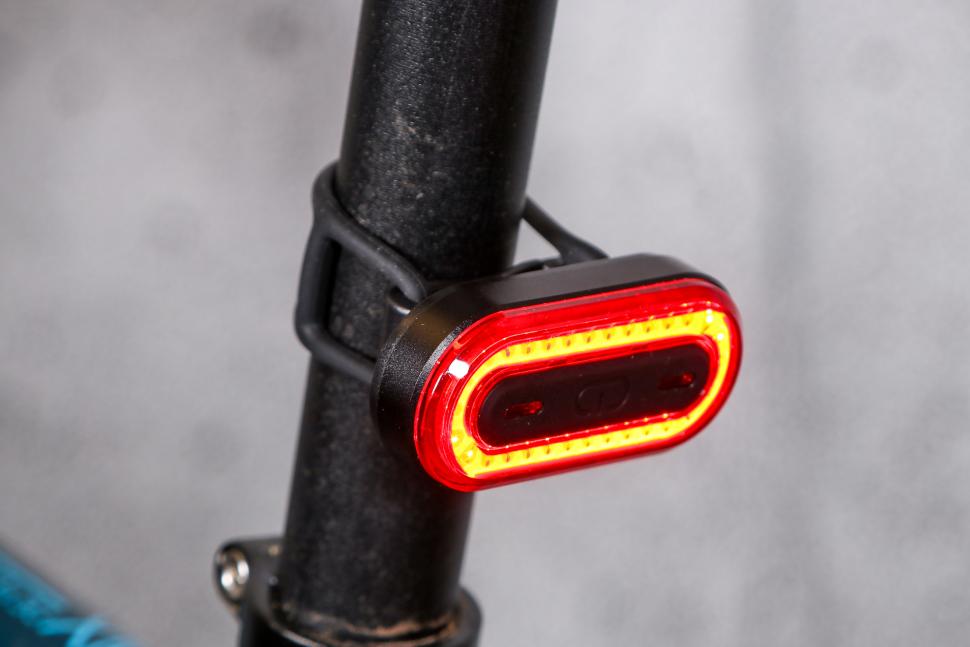 The curved lens also gives the light decent side visibility as well, which is a bonus. Although 100 lumens max might not sound as powerful as some, even in bright daylight it really stands out – I honestly don't think you need any more than this to stand out, unless you want to be really obnoxious.

> Check out our 6 tips for cycling at night

Operating the light is a doddle – just press the button on the front of the unit to turn it on, and keep pressing the button to cycle through the different outputs. Switching between steady or flashing modes is similarly easy – just double press the button quickly. Handily, when you turn on the light later, it will be in the last mode you used.

Gemini claims up to 24 hours' run-time from a single charge in its lowest power mode of 25 lumens, and up to 4 hours in the highest power mode (though it doesn't state whether this is steady or flashing).

In testing, the Juno 100 didn't get anywhere near the maximum run-time in the lowest power flashing mode, with a maximum time of half that – 9 hours 45 minutes to be precise. It fared OK in the high power 100 lumens steady mode, lasting just under 1 hour 20 minutes, at which point it cleverly goes into an automatic battery saving mode, with a low flash giving you a further 5 hours and 40 minutes.

Similarly, in low steady mode it took 3 hours 19 minutes before it went into its default battery saving mode, with the same extra time in low flashing mode.

There's no battery level indicator here – not unusual for a rear light – but instead a small built-in LED goes red when the battery gets low. Charging takes just an hour from empty.

The light unit is solidly built and looks made to last, its poly carbon composite construction could probably take a bit of a licking. 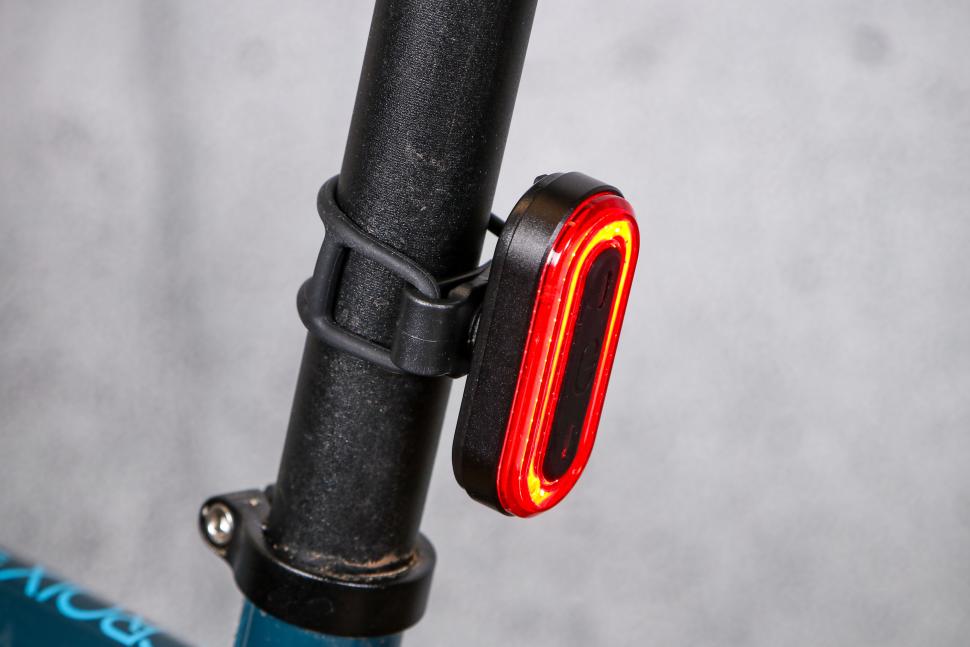 The light can be attached in a number of ways – either via the simple silicone band that allows you to wrap it around a seatpost snugly without it moving around, or using the built-in clip that enables you to attach it to a belt, bag, helmet, or anything else that it might fit. This makes it a great additional light to run alongside your existing rear light for really getting noticed.

As I mentioned earlier, the unit can be rotated around its mount to change up its look to suit whatever you're mounting it to, through 360 degrees, with the light locking in place at 90 degree intervals. This works well, apart from a slight niggle – that being a small amount of play in the mount which means it doesn't always lock into place at exactly 90 degrees, so you often have to manually adjust it a touch to get it to sit straight relative to whatever you've mounted it to. That might sound picky, but if you have neatness OCD like me it'll drive you insane.

Charging is taken care of via an old-school micro USB connector and a cable is bundled in the box. To access the charging port there's a chunky silicone cover which is quite deep and offers solid protection against water ingress – I certainly didn't notice any moisture seeping in after many foul weather rides.

My only gripe with the charging port is that the light needs to be orientated perpendicular to the mount, otherwise it's hard to access. That's nitpicking though, really.

Another 100-lumen option comes in the shape of Giant's Recon TL 100 with an almost identical weight, but it's £24.99 and trumps the Juno 100 for run-times, though side visibility could be better.

The Knog Plus Rear Light is even cheaper at £17.99 and is super-lightweight at 18g, but you get a minuscule 20 lumens output, which literally pales in comparison to the Juno 100.

Overall, this is a good looking, eye-catching (in a good way), simple-to-use and versatile light that can be mounted in a variety of ways. The run-times aren't quite as impressive as claimed, though.

Gemini says, "Increase your visibility and stay safe on the road. Designed for the day-in day-out commute."

Build quality of the light unit is excellent, though there's a little play in the rotating mount.

Very easy – just one button to adjust all its functions. Just enough modes to keep you happy without being OTT.

The mount is very versatile, allowing you to fit it conventionally to a seatpost, or attach it to a belt or bag with the built-in clip. The unit can also be rotated 90 degrees for a different style.

No issues, even when regularly exposed to water and mud.

Not quite as impressive as claimed, but still pretty good nonetheless. Charging time is very quick.

Super-bright without being painful to look at makes it safe for other road users; 100 lumens is plenty, even in bright daylight.

Early days, but no issues.

You can get cheaper 100-lumen lights, but also more expensive units with lower outputs.

The oval 30 LED arrangement really stands out and gets you noticed – especially in its 100-lumen mode. It doesn't blind you like some lights of this power output, which is great.

The clip mount, which makes it really versatile (handy when you like to use more than one rear light when you ride).

The slight play in the rotating mount.

It's very good: there are plenty of modes to choose from without it being confusing, it's simple to use and the run-times are good, if not quite as impressive as claimed. There are loads of mounting options too, making this a really appealing light.