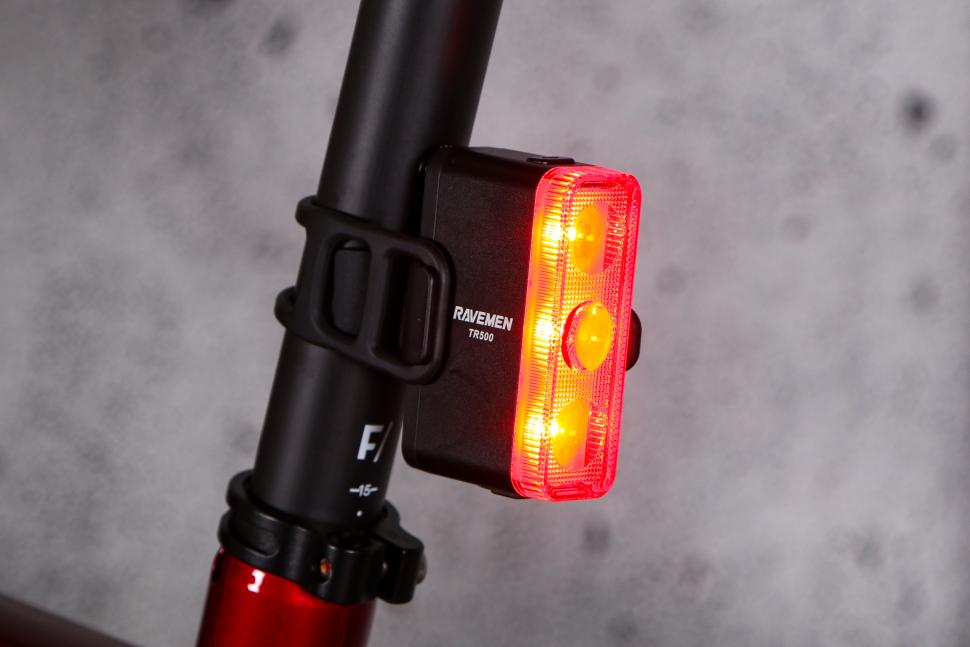 8
10
Fantastic quality, performance and design, though it is quite pricey
Very bright
Good side visibility
Very neat aluminium construction
Easy to mount and control
It's a fairly big unit
The price is up there
Weight:
88g
Contact:
www.bob-elliot.co.uk
How we test

The Ravemen TR500 USB Rechargeable Rear Light is great – very nicely made, easy to control and attach, and very bright. The arc eye-inducing 500-lumen output is actually reserved for occasional pulses in the 'Warning Flash' mode only, and all regular running is done at a far more reasonable maximum of 100 lumens.

I always ride with a flashing rear daytime light, and my favourites tend to be bright from a wide angle, very easy to attach, and last a long time between charges. The TR500 is all those things and has rapidly joined two other options – the Cateye Viz 300 and the Knog Cobber Big Rear Light – in my pile of go-to lights. 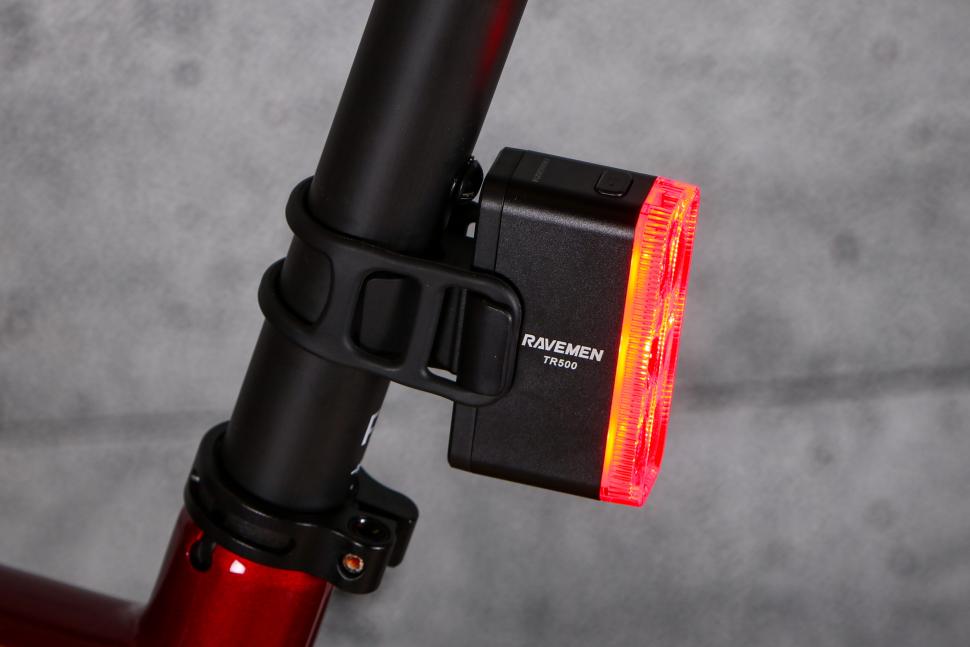 You might wonder why you need 500 lumens of red light for anything other than punishment laser surgery on blind drivers, but... wait, is there a 'but'? Hmmm. But realistically you're not actually outputting that very often, if at all. Yes, that was it.

Half the six modes are constant – 100, 50 or 20 lumen – and the rest are flashes. Only the 'Warning Flashing' option has a 500-lumen pulse in it, while the remaining rapid or slow options top out at 100 lumens. I favoured the Rapid Flash, which gives a claimed 21hr run time from the big (1,600mAh) lithium-ion battery.

I won't dispute that run time for two reasons: one, no matter how many 'Oh bugger, I meant to charge that' moments I had on reaching my bike, it never let me down before I finally remembered to juice it up. I like that in a rear light. And two, I don't feel like watching this thing until it goes out for the same reason I don't feel like staring into the sun for the best part of two days.

Rapid Flash is actually the most efficient mode, as the others are either lit more constantly or pumping out that 500-lumen EMP burst. The shortest run time is a claimed 4.5hrs of solid light in the 100-lumen High setting, and I got within five minutes of that on the bench. As it faces its final curtain the TR500 steps down to a five-lumen power-saving mode for safety and starts blinking its indicator light because it really wants charging.

The TR500 remembers your last mode setting between uses, which is good, but there's no way to check the charge status before the automatic warning comes on, which is less good.

It takes another 4.5hrs to reach 100% from a flat battery, despite the up-to-date USB-C connection, but again it's quite a big battery to fill at two amps.

If you fancy making life more exciting by reducing the run times by random, unguessable amounts, turn on the braking function. It's simple enough (a long press with the light off, and wait until it rapidly flashes), and as doing so adds an auto-off that shuts the unit down after two motionless minutes – and turns it back on when you move the bike again – you might be happy leaving it enabled for town use and commutes. It works very well, though it really doesn't take much movement to wake it up again. Still, that old lady who brushed against it and is now on the ground screaming about her eyes was clearly trying to steal your TR500 anyway.

The braking sensor isn't sensitive to acceleration in any direction the way some lights are, which kind of helps, but it's a little hard to tell just what it IS responding to – rapid movements on more than one axis or vibrations are what set it off, as far as I can tell, and the result is a two-second burst of 200 lumens at somewhat random times.

I'm not a huge fan of braking modes in general, as the only people likely to even react are following riders, and after a few minutes of being sunburnt by your ultraviolet outbursts even they'll want to ram you off the road anyway. 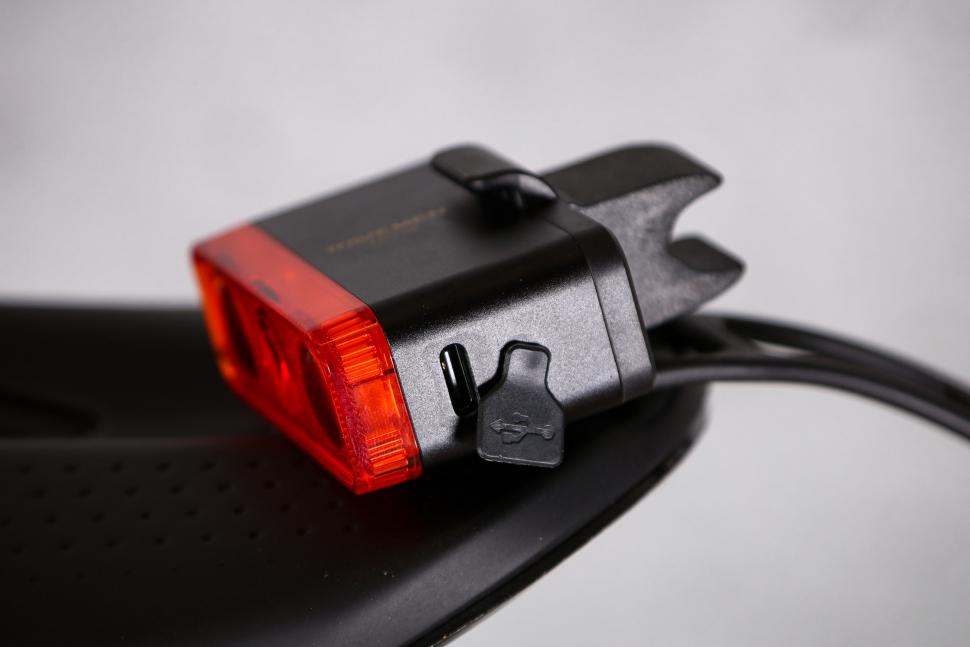 The unit itself is quite large but noticeably nicely made, with a very well-machined aluminium case sealed tight with countersunk hex bolts in a black oxide finish – much nicer than the usual cheap and shiny Phillips head screws.

The lens feels thick, tough and strongly bonded on (its deep edges give great side visibility) and the whole lot is rated to IPX4. That's not especially high, but enough for use without concerns in any kind of rain and puddles.

The charging port sits underneath, protected by a secure silicone bung and gravity; any water that did get in would naturally want to drain out. The single button, which is easy to use even in gloves but not easy to accidentally switch on or off, sits on top beneath its own silicone cover. 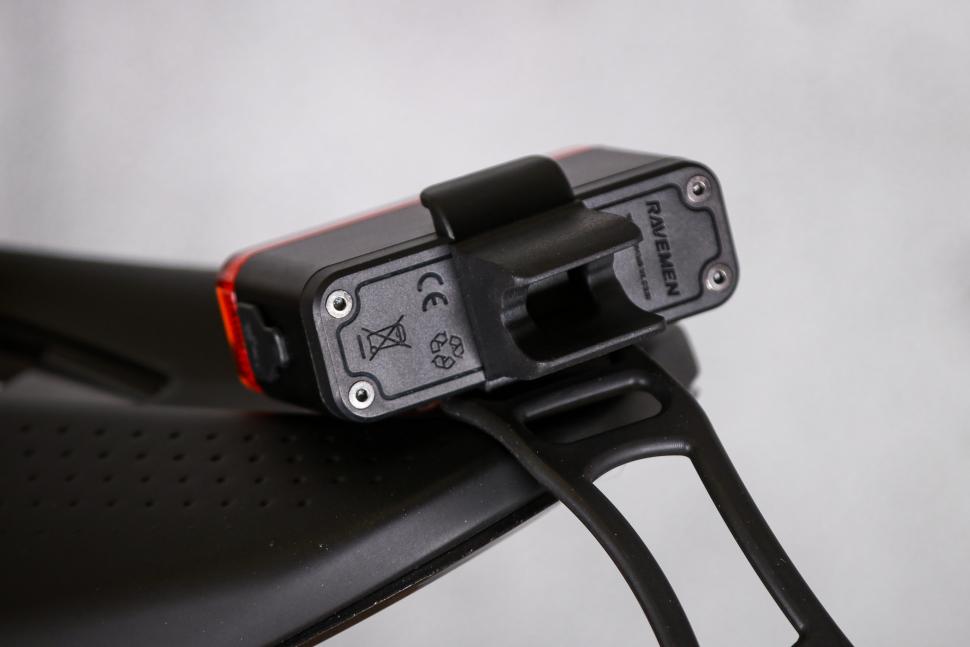 The unit is completed with separate pads for round or aero seatposts, plus short and long rubber ladder bands to accommodate them. Either the light I tested didn't have the round post version in the package or I somehow accidentally flung it over the moon and lost it – nobody knows – but as a result I can confirm the aero one works very well, if rather prominently, on a round post. Hooray for squashy, grippy silicone wonder-rubber.

For example, Shaun rated the Prime 360 Super Bright Rear Light when he tested it. It costs only £19.99 and has 'super bright' in its name, so it must be good. In reality it's only 50 lumens, but also in reality that's pretty decent most of the time.

The Cateye Viz 450 Rear Light is much closer power-wise and, while there's no stated capacity for the lithium-ion battery, its run times are higher than the TR500's. It's cheaper too at £49.99.

The Cateye Viz 450 Rear Light is much closer power-wise and impressed Jez when he tested it. And while there's no stated capacity for the lithium-ion battery, its run times are higher than the TR500's. It's cheaper too at £49.99.

Anyway, is that the time? I've kept you long enough. This is good. I like it. Get one.

Fantastic quality, performance and design, though quite pricey too

Ravemen says: "With a maximum of 500 LED lumens and improved eye-catching warning flashing mode, TR500 maximises the ride's daytime visibility to a new level. The light comes with an intelligent brake sensor for urban riding and auto-on-off function for a convenient operation. There are also 5 other modes, 3 constant and 2 flashing for various riding environments. It is easy to use with the USB-C charging port and compatible with round and aero seatposts."

It's almost ridiculously bright, but when you can't say the same for approaching drivers, that's fine...

Plenty are lighter, if that matters, but it's perfectly acceptable.

It's easy to use, very effective and lasts really well.

I still find braking functions a bit gimmicky, but then you can turn that off.

It's expensive for a rear light, but only because most others have nowhere near this power. It's much closer in price to other very bright lamps, and is a very good unit overall – if you want this much output it's definitely worth it.

This is easy to fit, easy to control and pleasingly well made. It's debatable whether you need this much power in a rear light - perhaps for winter city commutes you do - but the flipside is that at lower brightnesses, the whole unit is just ticking over easily and lasts really well.