A £1,649 carbon road bike with a geometry that's tweaked just a touch for endurance
by Mat Brett

Wilier’s new £1,649 GTR Team 105 Endurance bike has just arrived at road.cc for review, equipped with a Shimano 105 groupset – the clue’s in the name – and Mavic Aksium wheels. Let’s have a quick look at it before we take it out on the road.

The GTR used to be just a single frame, but Wilier has changed things massively this year. We’ll get into how it has done that in a mo.

The new GTR Team and SL have geometries based on Wilier’s Cento1 high-end race bike, but with about 10mm of extra height in the head tube. Wilier feel that it’s better to add a little length to the head tube than to have most riders putting a spacer underneath the stem to bring the handlebar up higher. It’s a stiffer and neater solution, and Wilier reckons that the design still manages to retain a front end that feels planted. 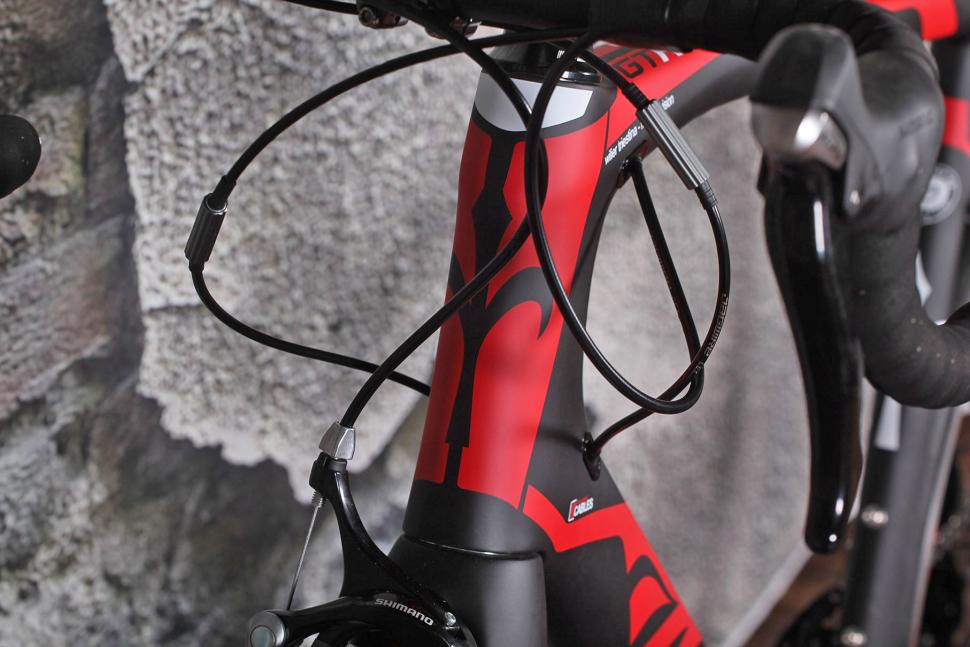 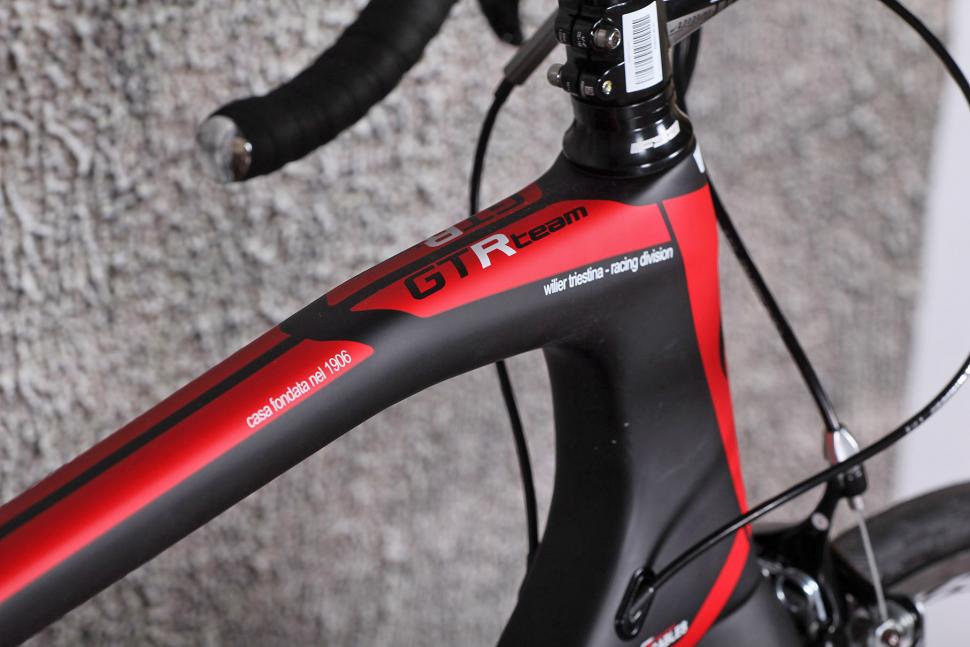 The unusual factor is that both the GTR Team and the GTR SL come in two different geometries: first, there’s the race geometry, and then there’s the endurance geometry.

The difference is in the fork. The fork on the endurance version is longer than that of the race model, so the front end is higher. Wilier has done this by building an extra 10mm into the crown. It has also increased the offset from 45mm to 49mm. The biggest effects of this are an increase in the stack height (the vertical distance from the centre of the bottom bracket to the top of the head tube), a slackening of the head angle, and an increased wheelbase. The idea is that you get a slightly more relaxed riding position and increased stability. It’s still a performance-minded geometry, mind; this isn’t a setup that’s abandoned the idea of going fast at all. Wilier reckons that, like the race geometry, the endurance geometry delivers an engaging ride. We’ll soon find out. 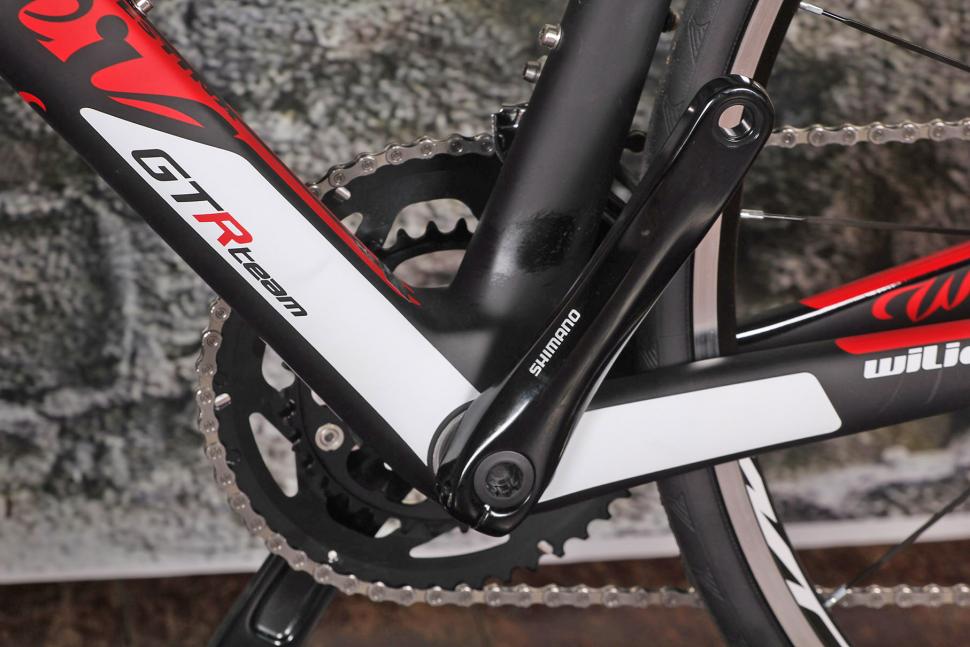 For comparison, the stack height of an XL bike in a race geometry is 583mm (a little lower) and the reach is 394mm (a little higher). 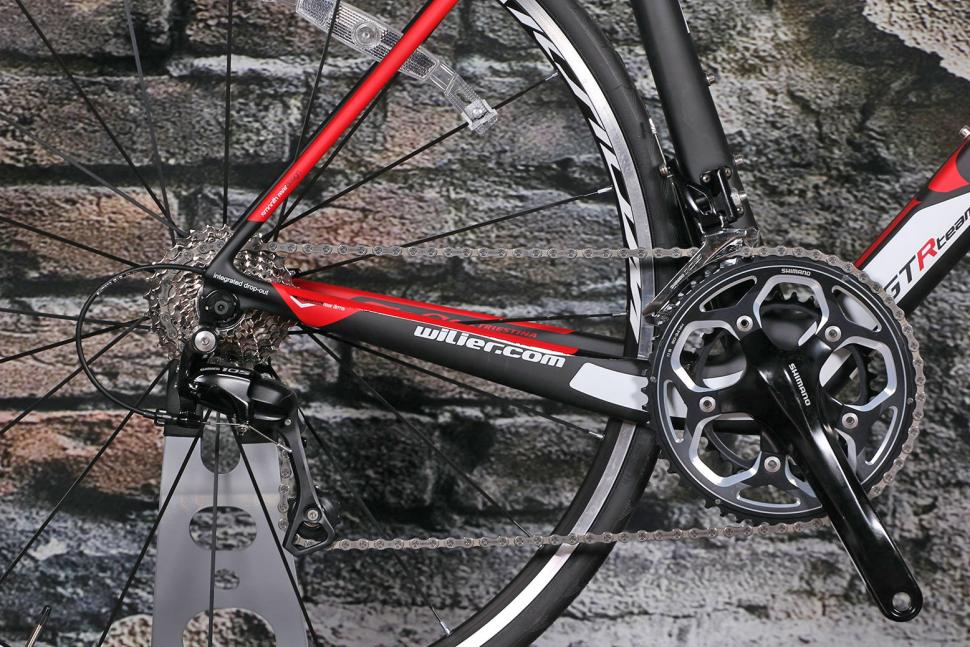 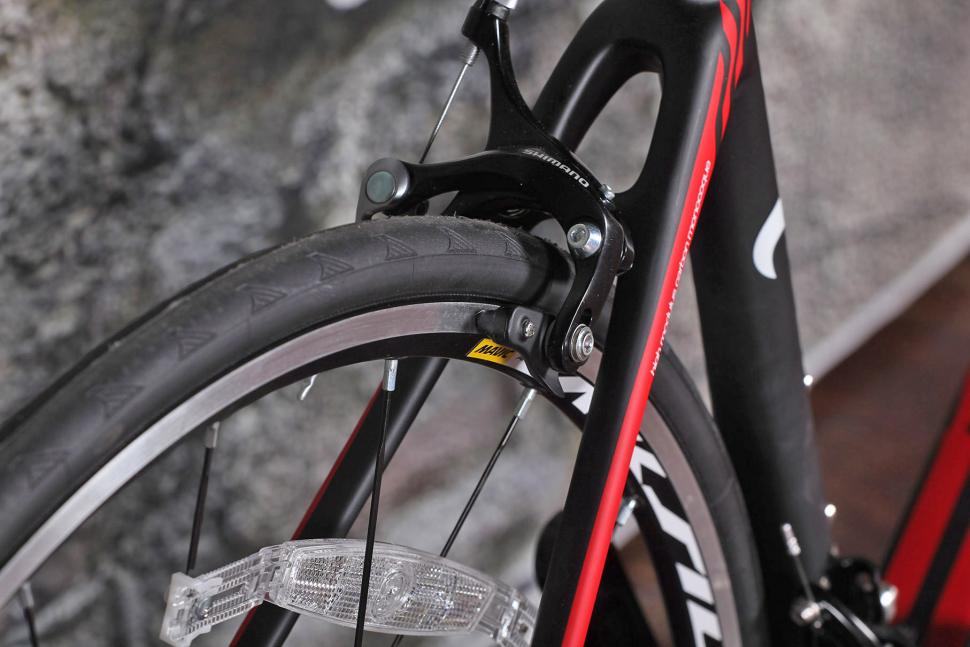 The 105-osity of our review bike extends to both derailleurs, the shifters, the cassette and the chain. The brakes are non-series R561, meaning that they don’t belong to any groupset, and the chainset is non-series too: RS500. It doesn’t have the hollow crank arms of some Shimano chainsets, and it has a five arm spider whereas 105, like Dura-Ace and Ultegra, has switched to a four-arm design and super-stiff chainrings. The Aksium wheels might be Mavic’s cheapest road option but we’ve found them to be quick and, in most cases, reliable. They come shod with 25mm Conti Ultra Sport tyres.

Go to our guide to Mavic road wheels for more info.

The chainset is a compact (with smaller than standard 50 and 34-tooth chainrings) and it’s hooked up to an 11-28-tooth cassette, so we’re hoping that getting up the climbs won’t be overly painful. 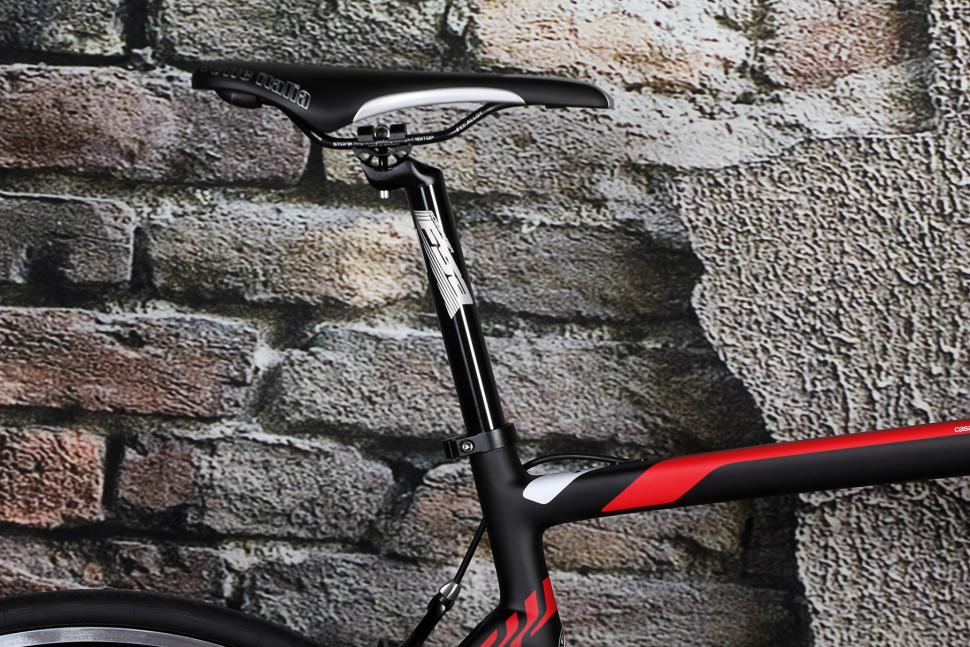 The seatpost and stem are aluminium options from FSA, as is the compact (meaning that you get a shallow drop) handlebar which should hopefully complement the character of the endurance frame. The saddle is a Selle Italia X1. 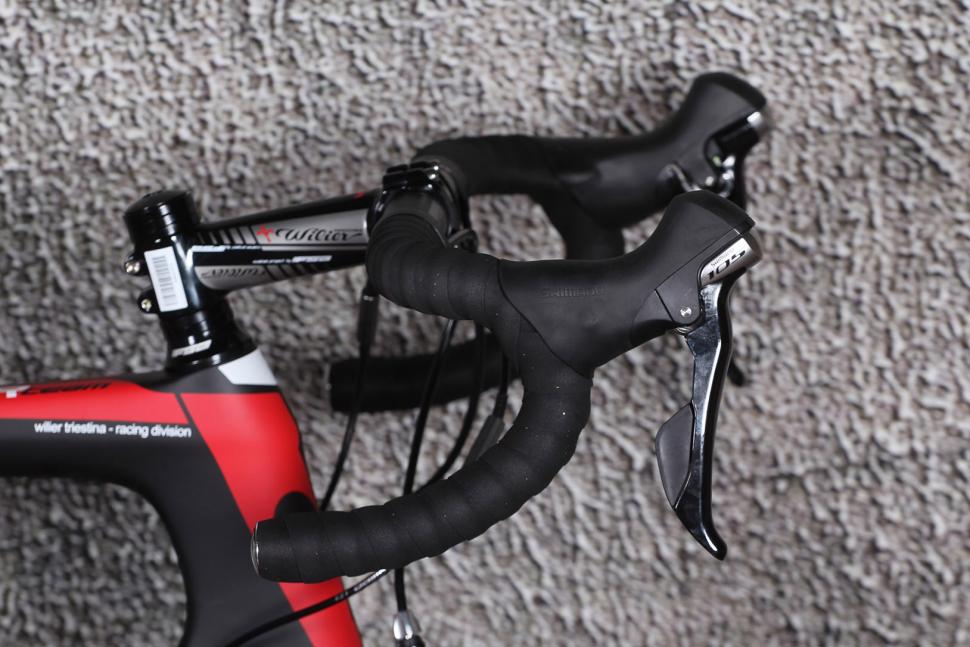 If you wanted to go for one of the Wilier GTR SL bikes – the lighter weight ones, remember – these are a bit more expensive. That’s usually the way! The most affordable of them is the Shimano Ultegra build (£2,399, in a race geometry). That’s full Ultegra, by the way, including the 52/36-tooth chainset and the brakes. The two other models are both priced £2,999; one of these is Shimano Dura-Ace with Mavic Ksyrium Elite wheels, the other is Campagnolo Chorus with Campag Zonda wheels. 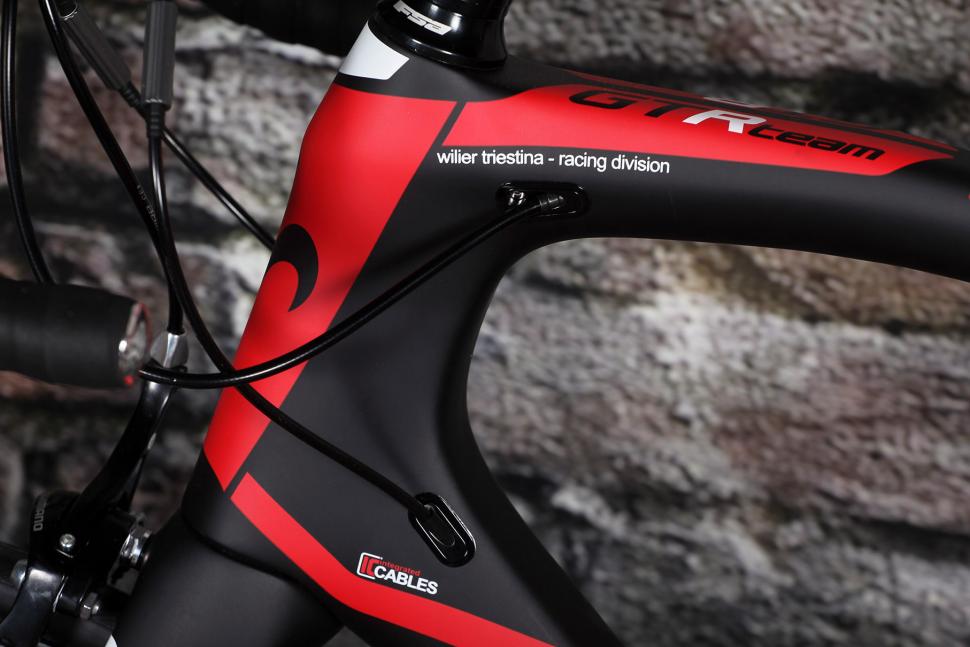 There’s also a GTR Team Disc. This bike uses the same 46 ton and 30 ton carbon as the standard GTR Team that we we have for review, and it’s available in the same endurance geometry. It comes in a Shimano 105 build for £2,399 and a Shimano Ultegra build for £2,699.

The Merida Ride 5000 that we reviewed here on road.cc last year is another bike built to a geometry that’s a bit more relaxed than that of a standard race bike but still performance-orientated. The 2016 model has Ultegra shifters and derailleurs and Fulcrum Racing 7 wheels, but it is priced at £1,800, which is over £150 more than the Wilier. 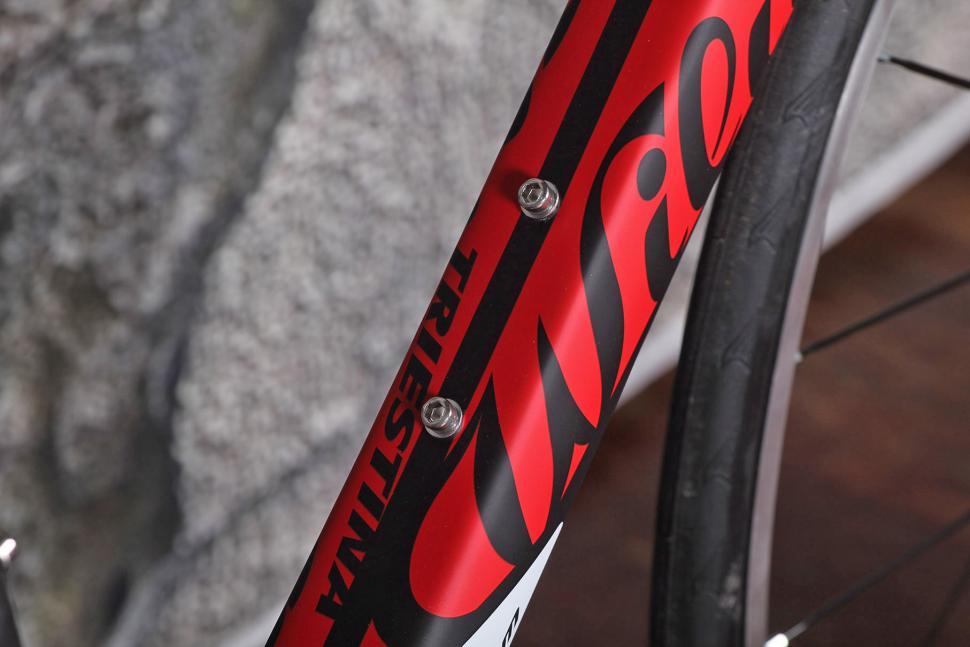 Right, this bike isn’t going to ride itself; we need to hit the road and get some miles in. We’ll be back with a review on road.cc soon. In the meantime, check out www.wilier.com for more details.