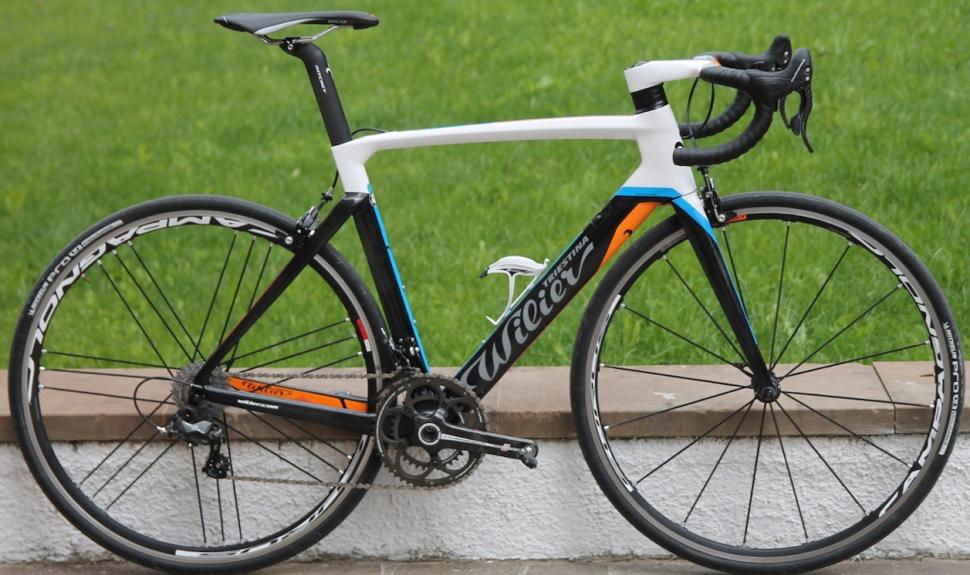 We’re living in an era of aerodynamic road bikes, and Wilier, an Italian company which this year celebrates its 110th birthday, has launched the all-new Cento10Air.

The Cento10Air is the evolution of the company’s first aero road bike, the CentoAir, but this a clean sheet redesign. Key design principles have been the search for improved aerodynamic performance, naturally, but also the quest to produce a lighter frame, using both its Twinblade time trial bike and the lightweight Zero 7 as points of reference.

This new bike has already been spotted out in the wild. If you were paying close attention to the Giro d’Italia this year, you might have spotted Italian cycling superstar Filippo Pozzato putting the new bike through its paces. 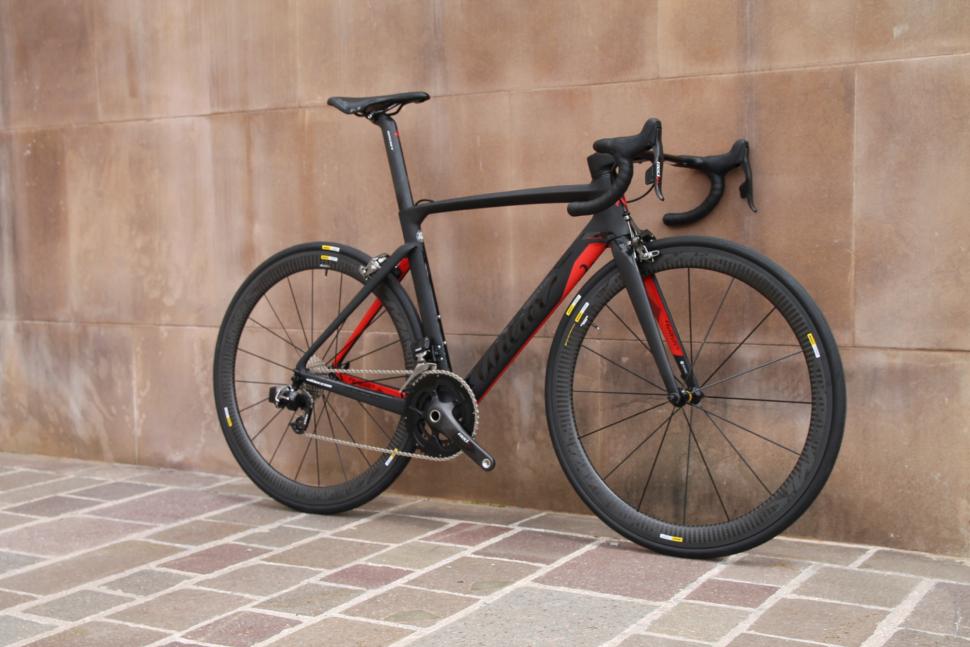 So what’s new then? Everything. Firstly, Wilier has utilised Kamm Tail shaped NACA airfoil tube shapes for every section of the frame, from the down tube to the seat tube and seatpost. The profiles and the junctions of the different tube sections have been honed with the use of CFD testing, computer software which allows easy manipulation of the frame and test results, which Wilier tells us, are accurate enough that it doesn’t feel compelled to conduct expensive wind tunnel testing. The result of the development leads Wilier to claim an 8% aerodynamic improvement over the previous bike. 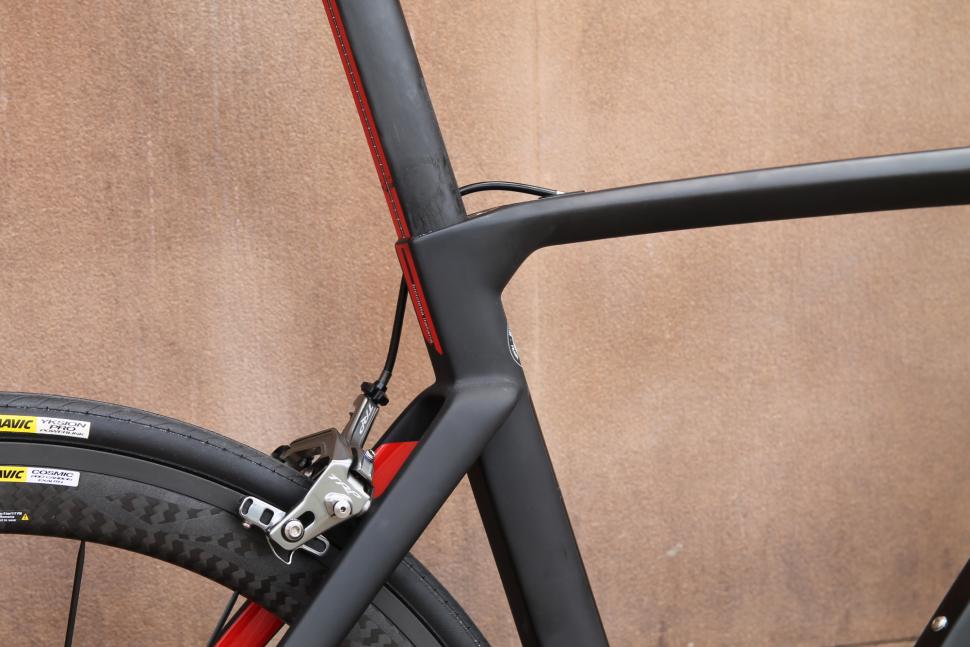 Key to the Cento10Air is a new one-piece integrated handlebar called the Alabarda. Like the frame, it too uses an NACA profile, and is intended to reduce the frontal surface area, and contribute to the overall aerodynamic improvements. Like Specialized with its Venge Vias, Wilier has routed the gear cables inside the handlebar and stem and directly into the frame. To accommodate the internally routed gear cables, Wilier has flattened the front of the steerer tube to provide just enough space for the gear cable housing to squeeze in the cavity between the steerer tube and frame. A special headset top cap directs the cables into the head tube, and the outer cable housing terminates a short way down the down tube, where Wilier has integrated a front A special headset top cap directs the cables into the head tube, and the outer cable housing terminates a short way down the down tube, where Wilier has integrated a front mech barrel adjuster. 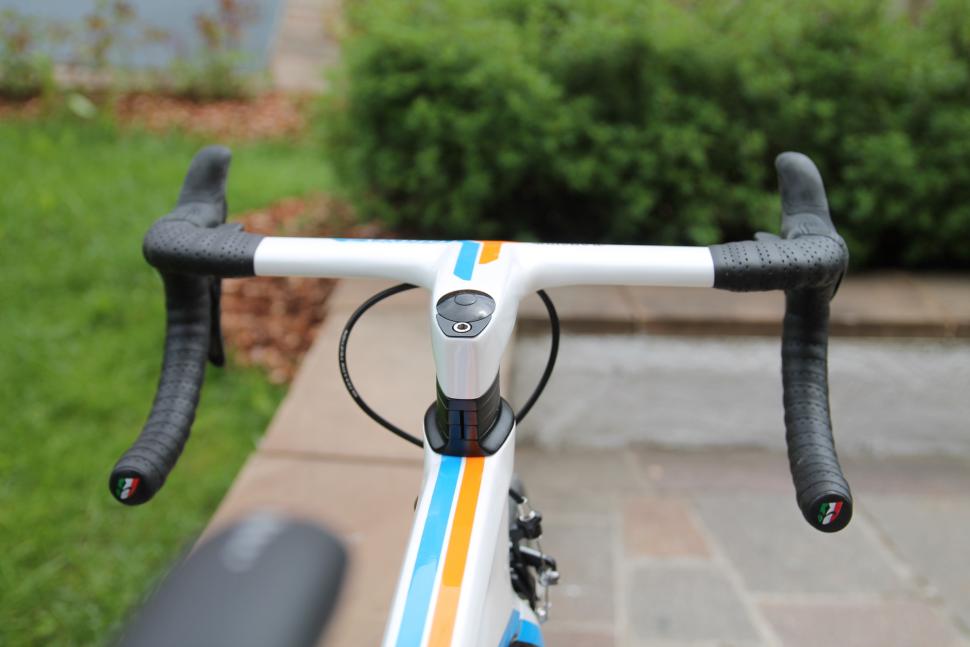 It hasn’t, though, routed the brake cables inside the stem and around the steerer tube. Wilier told road.cc that while it did consider designing a proprietary integrated brake, it decided to go with the simple option and allow consumers to specify readily available brake calipers, and that the small amount of drag produced by the exposed cables would be offset by the ease of setup and adjustment. 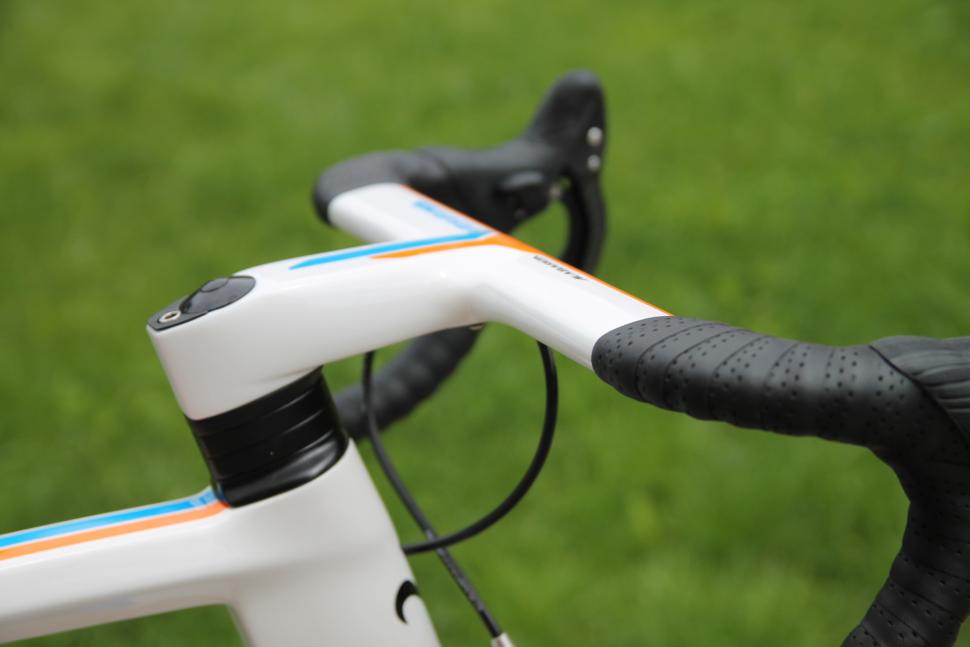 The Alabarda has a 10.5-degree stem angle, intended to produce a flat stem both to reduce drag and lower the front-end, which is 18mm lower than the previous bike. Through a system of easily removable split spacers, there is a total of 30mm of height adjustment. The handlebar will be offered in six reach and drop variations, from 90mm x 400m up to the 133mm x 420mm developed specifically for Pozzato. 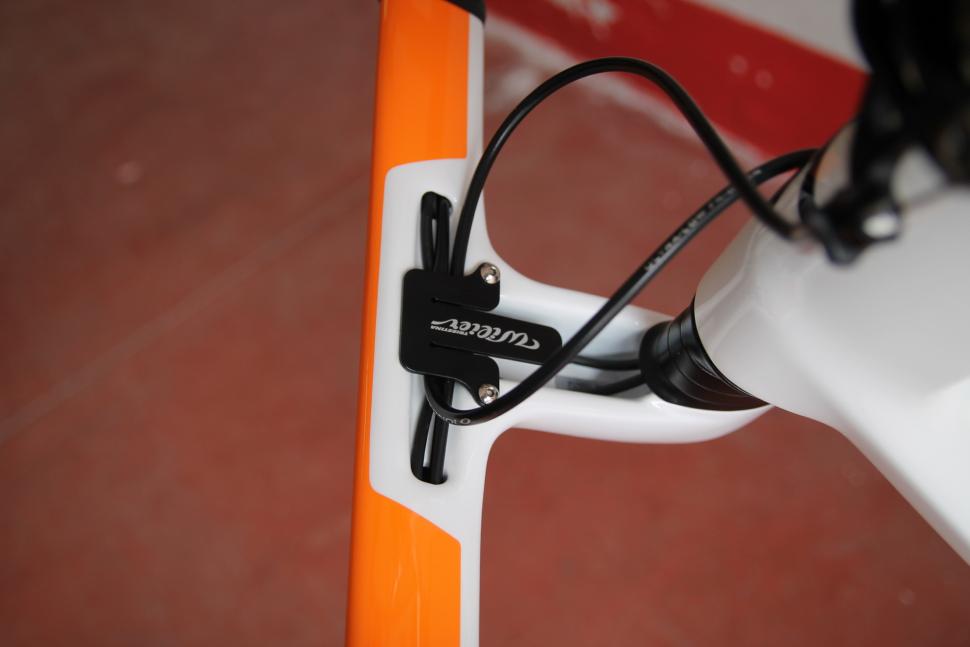 Keeping the drag to a minimum and cleaning up the front-end, the handlebar has a small recess to hide away a Di2 or EPS junction box, with a small plastic clip to secure it into place. Wilier has developed a range of Garmin and computer out-front mounts that can be attached via two bolts to the bottom of the bar. 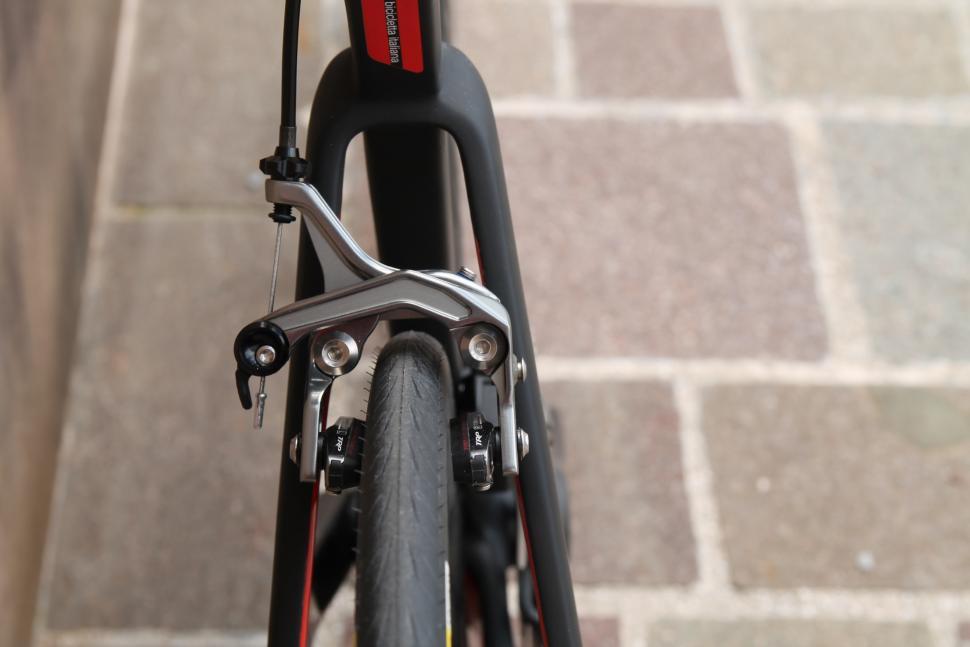 Another development to improve the aerodynamics is the lowering of the seatstays where they meet the seat tube. The design is apparently as low as the UCI rules permit. There are three bottle cage mounts on the down tube so, if using a single water bottle, the cage can be mounted lower. 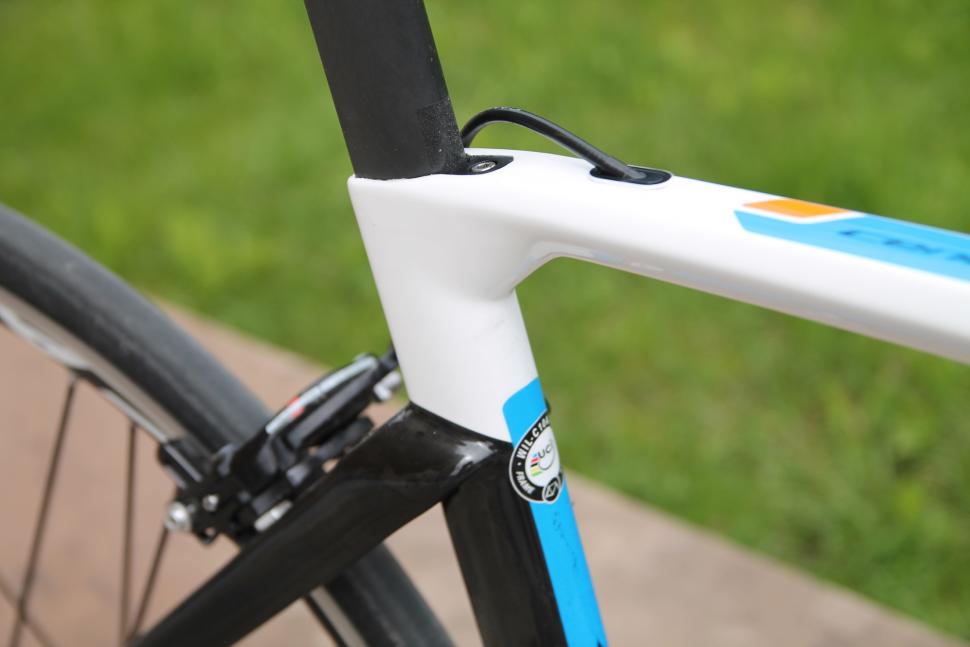 An aero seatpost produced by Ritchey and made from carbon fibre is apparently a full 50% lighter than the one used on the previous frame. It has a 20mm offset and uses a single bolt clamp mechanism, and the seatpost clamp is hidden in the top tube. 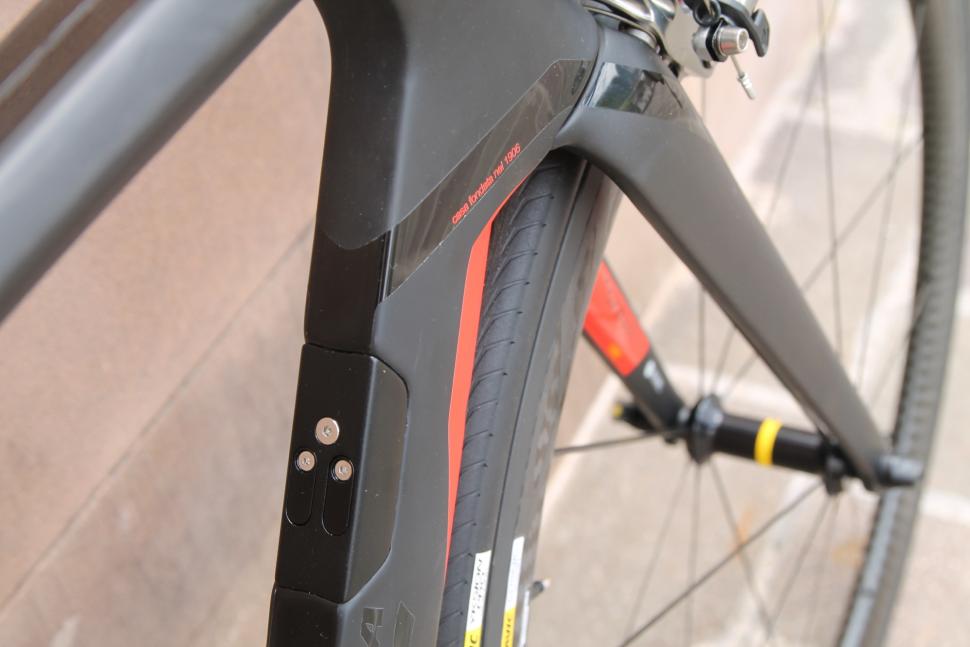 As well as improving the aerodynamics of the frame, Wilier was also keen to get the weight down, and it’s managed to shave a full 200g off the frame compared to the previous Cento1Air, so it now weighs about 990g. Wilier reckons it can go lighter and might look at a lighter version in the future. The frame is made from a mix of 60 and 40-ton carbon fibre. The use of a standard pressfit 30 bottom bracket was made because it saves a bit more weight.

The new frame will be available in six sizes with the tube profiles and size specific to each size. The downtube ranges from 56.3mm profile on the smallest frame to 67.5mm on the largest frame size, a 2.5mm difference between each frame size.

David was able to spend some time riding the new bike at the launch in Cortina, Italy and will be posting a first ride review soon...