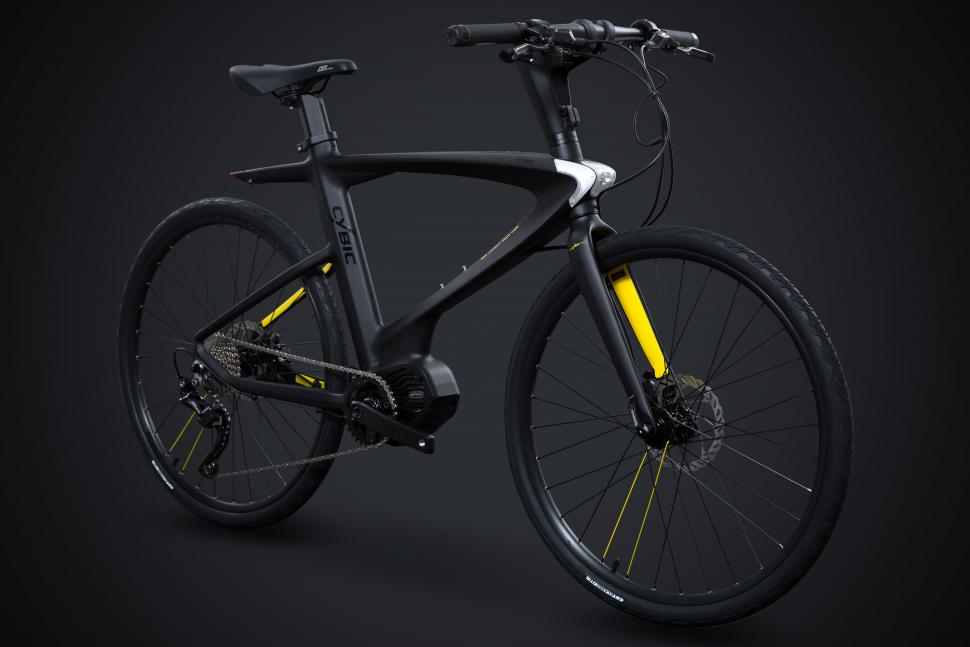 Bike tech big ideas: They're clever, some are even cool but will they make it on to your bike …or even be your bike?

They're crazy, but they might just work… maybe! Super magnesium, clever cable integration, and an on bike ‘wind tunnel’, and the bike industry has plenty more up its sleeve...
by Jack Sexty

We saw some impressive, some not so impressive and some downright weird stuff at Eurobike this year!

The holy grail of any cycling innovation is surely to make it indispensable, or at least hugely popular and widely accepted as something that will enhance your cycling; GPS computers, electronic gears and tubeless tyres were all things met with scepticism when they first emerged, but are now the norm for many of us.

So what of this year's line-up of tech innovations? We've rated these new products from 0 to 10 based on how likely it is we think they will make it big... 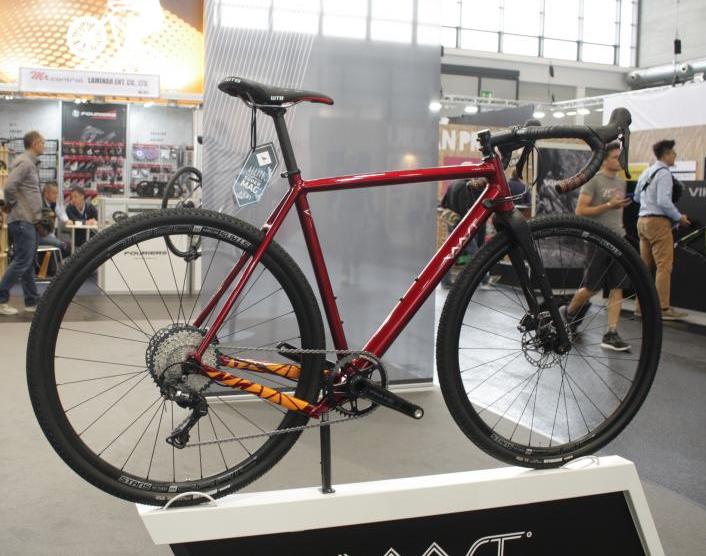 Fledgling Ohio brand Vaast Bikes are aiming to make bike production more sustainable with their framesets made of Allite's 'Super Magnesium', the first in the world to do so (obviously not the first magnesium bike by any stretch that honour goes to the Kirk Precision). It's 100% recyclable, breaking down far quicker than carbon or aluminium, meaning a new bike made of magnesium alloy in the future could technically be made out of material that used to exist on another bike. As magnesium is readily available on earth, it's also more sustainable to get hold of and manufacture than alloy or titanium. We like this idea, and if Vaast can back up their performance claims that their frames are 33% lighter than aluminium, 56% stronger than grade 1 titanium and 20 times better at absorbing shock than alloy, we can't see any reason why this innovative production method can't take off.
Chances of making it big? 8/10 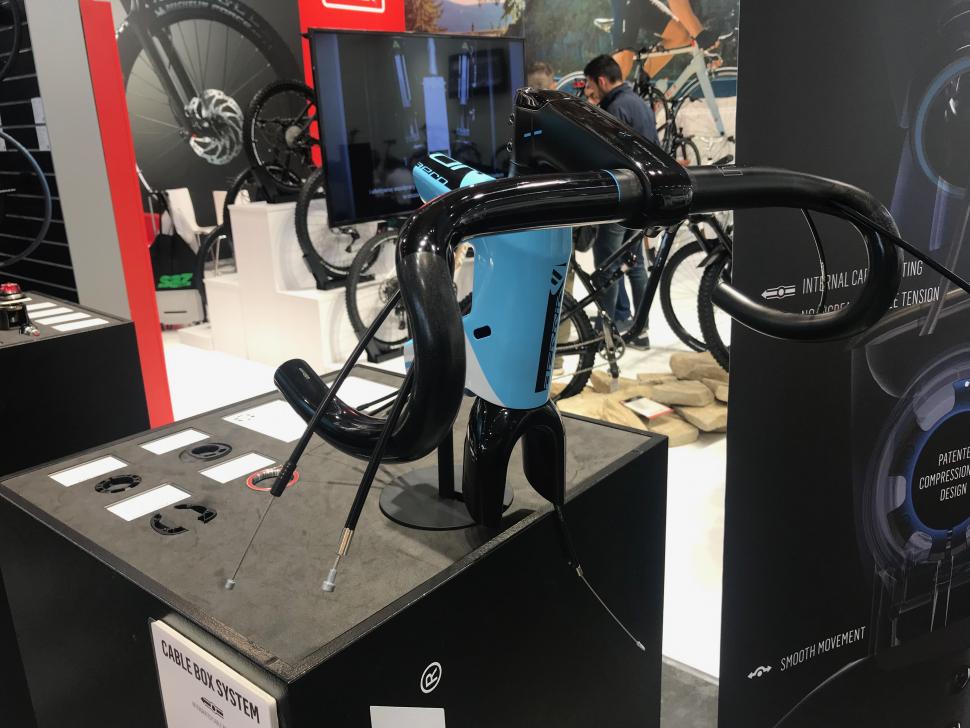 This cutting-edge cable integration system allows for both fully integrated and semi-integrated cable routing, designed for ease of use. The adjustable cover allows for cable routing without needing to remove the stem, and its adaptable design is made to be compatible with a wide variety of handlebar choices; there's also a patented compression ring inside which protects the steerer. While many high-end road bike brands are now designing their own cockpits to hide cables, Token say they're already working with brands to spec the Blackbox on off-the-peg bikes to clean up the cable routing and make life easier for workshop and home mechanics alike.
Chances of making it big? 7/10 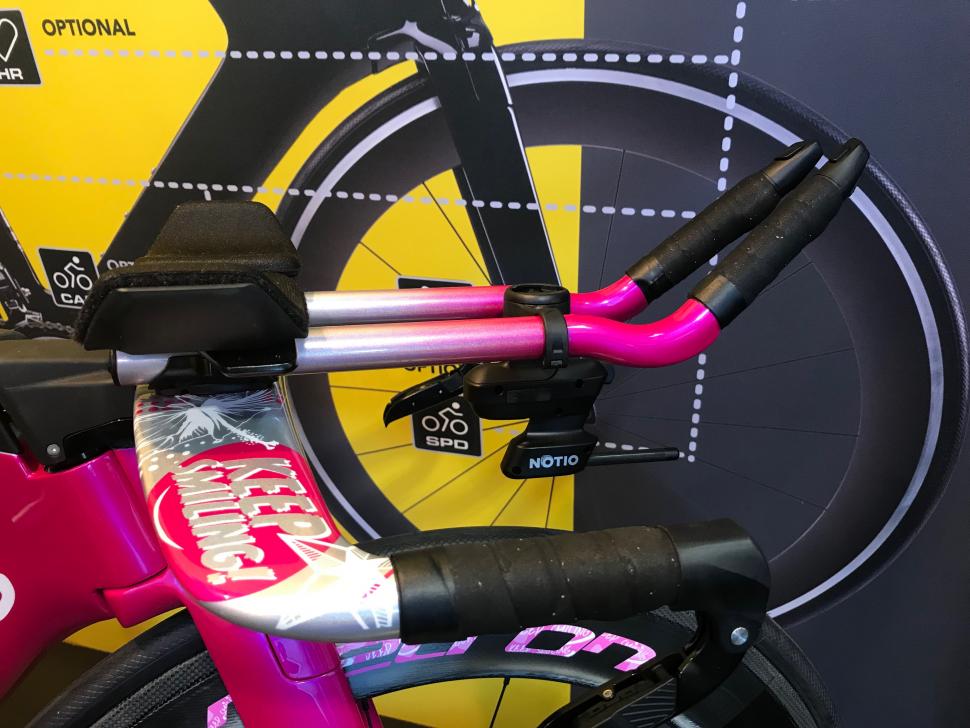 Notio say their device is the world's first that provides 'on-bike wind tunnel technology'. As well as its built-in power meter, Notio measures temperature, humidity, barometric pressure and air speed. This means it can calculate your CdA while you ride, so you can work to reduce it and stay in an optimal position according to the numbers on your screen. The device can be controlled via the Notio app, on your Garmin head unit or directly; as long as it's connected, when you press go on your GPS the Notio will flash green and start recording. With prices set to be around the £950 mark, high cost is always going to be something that will put many of us off; but with a large roll call of elite cyclists already using Notio's data, including Dan Bigham and the whole Jumbo–Visma team, we think its future is bright.
Chances of making it big? 6/10 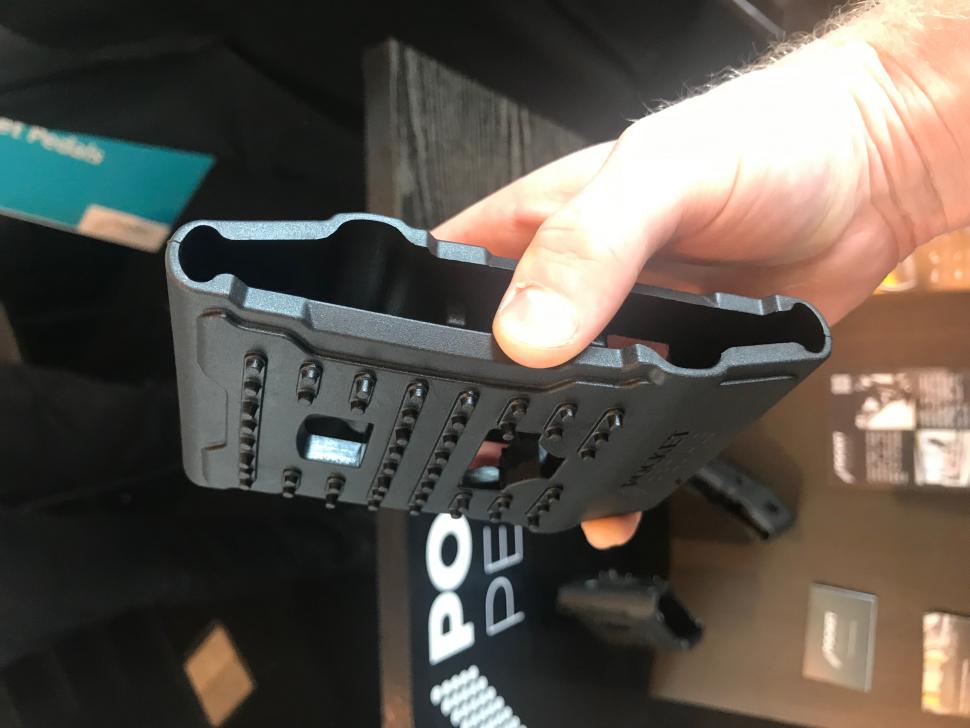 This nifty patent-pending contraption slips over your Shimano SPD or SPD-SL pedals to make it possible to ride in flat shoes. There's no clipping anything in like other pedal converters we've seen, you simply pop them over your pedals and it takes seconds. Most of us who ride road-style pedals can handle a short trip in trainers and those who ride SPDs will often use shoes with a recessed cleat; so while there's a place for pocket pedals, we can't see them becoming absolute essentials for most cyclists.
Chances of making it big? 6/10 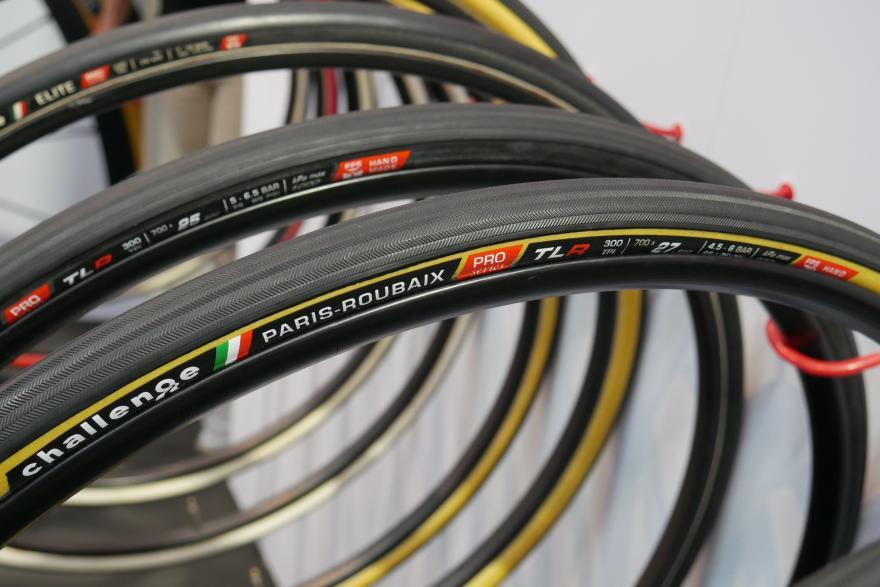 Challenge have managed to make a handmade tyre that is also tubeless with their Handmade Tubeless Ready (HTLR) technology. For the tubulars, the latex inner tube is removed and replaced by a latex coating on the inside of the tyre. They're aimed at racers who want the puncture protection of tubeless and the ride feel of tubs, and Challenge say these tyres are the ultimate solution; but with tubulars slowly but surely going out of fashion, we can't see that there will ever be more than a niche demand for this very lovely, but if anything overcomplicated take on the humble tyre.
Chances of making it big? 5/10

The Cybic E-Legend is a smart e-bike with connected features and Amazon Alexa functionality... at least it was supposed to, until Cybic ran into problems getting Alexa to work flawlessly; for example, the system struggled to deal with background noise when the rider was giving an instruction, such as a turn signal. Cybic went back to the drawing board and tell us the Alexa-enabled version will be ready early next year. They're planning on launching the bike without the Alexa technology through Halfords in the UK soon, which already has a smart lighting system, mapping and navigation, location info and a cloud service to store all your data.

It sounds like clever stuff and we can see it tempting tech enthusiasts; but when most of us just want peace and quiet on the bike, we're not too convinced that shouting at Alexa will appeal to the majority of cyclists...
Chances of making it big? 4/10 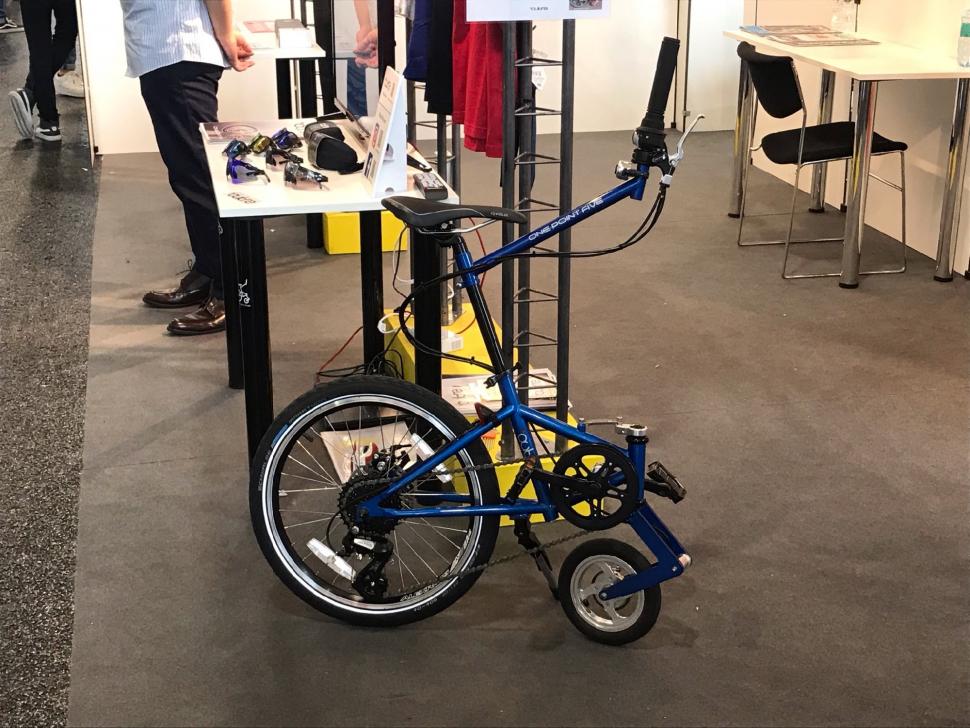 The inventor of this curious-looking contraption told us that one of the best things about it is that it's so difficult to ride, you get the joy of learning to ride a bike again... not the most convincing sales pitch we've heard! While the One Point Five looks compact enough to take on public transport and will be fun to bust out at parties, we can't see it replacing a traditional two-wheeler any time soon...
Chances of making it big? 1/10 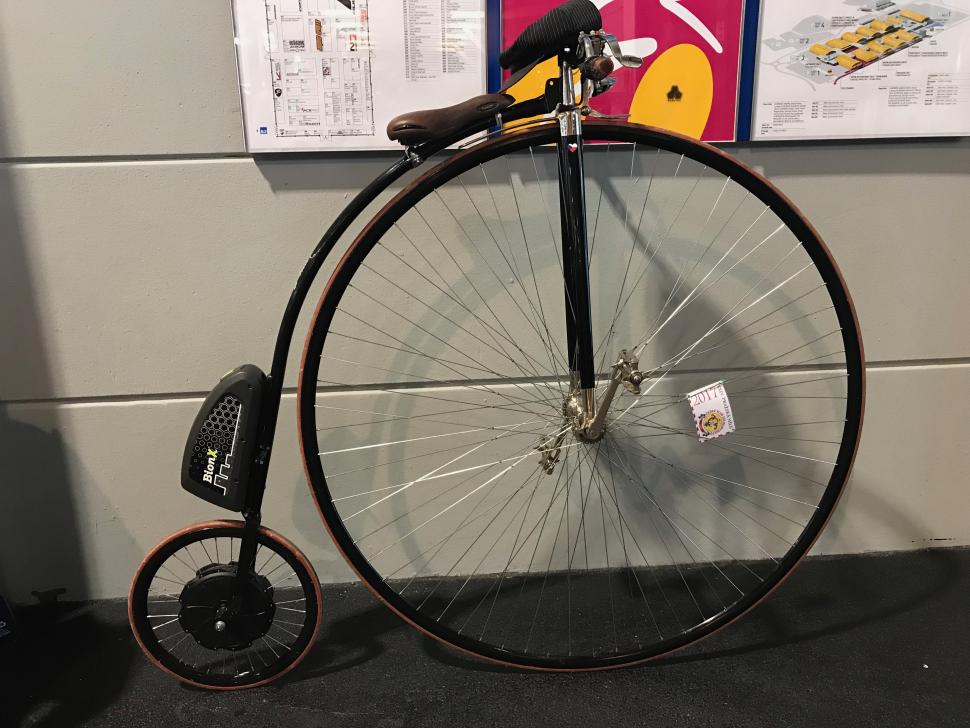 The electric bike has been hailed as a revelation that will play an integral part in the future of urban mobility… so how about taking everything that makes the e-bike an easier, more accessible way of cycling and making things ten times more difficult? While we appreciate the novelty of an e-penny farthing, unfortunately we just can’t help thinking that this is an idea that won’t quite catch on with the public; not only that but BionX, the company that make the motor and battery system on this one-off, are no more after filing for insolvency earlier this year. The bike's creator tells us he’s looking for a new motor system supplier so he can start to manufacture it on a larger scale... good luck with that!
Chances of making it big? 0/10

Do you agree with our scores, or are we pedalling nonsense? Let us know what you think in the comments of course!